Something Else to Know - 11 March

Since sending out my previous email, this one from the NY Times is about the core of Putin's mindset that you may find interesting:
OPINION

How Vladimir Putin Lost Interest in the Present 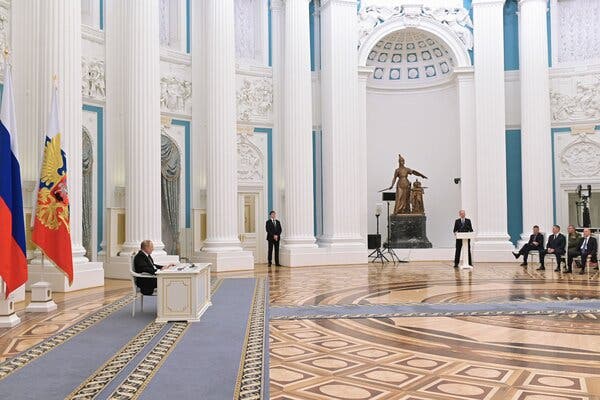 President Vladimir Putin, left, meeting with members of Russia's Security Council last month.Credit...Pool photo by Alexei Nikolsky/EPA, via Shutterstock
Thanks to Vladimir Putin's decision to invade Ukraine, Russia is now more isolated than it has ever been. The economy is under sanctions and international businesses are withdrawing. The news media has been even further restricted; what remains spouts paranoia, nationalism and falsehoods. The people will have increasingly less communication with others beyond their borders. And in all of this, I fear, Russia increasingly resembles its president.
I have been talking to high-level businessmen and Kremlin insiders for years. In 2016 I published a book, "All the Kremlin's Men," about Mr. Putin's inner circle. Since then I've been gathering reporting for a potential sequel. While the goings on around the president are opaque — Mr. Putin, a former K.G.B. officer, has always been secretive and conspiratorial — my sources, who speak to me on condition of anonymity, have regularly been correct. What I have heard about the president's behavior over the past two years is alarming. His seclusion and inaccessibility, his deep belief that Russian domination over Ukraine must be restored and his decision to surround himself with ideologues and sycophants have all helped to bring Europe to its most dangerous moment since World War II.
Mr. Putin spent the spring and summer of 2020 quarantining at his residence in Valdai, approximately halfway between Moscow and St. Petersburg. According to sources in the administration, he was accompanied there by Yuri Kovalchuk. Mr. Kovalchuk, who is the largest shareholder in Rossiya Bank and controls several state-approved media outlets, has been Mr. Putin's close friend and trusted adviser since the 1990s. But by 2020, according to my sources, he had established himself as the de facto second man in Russia, the most influential among the president's entourage.
Mr. Kovalchuk has a doctorate in physics and was once employed by an institute headed by the Nobel laureate Zhores Alferov. But he isn't just a man of science. He is also an ideologue, subscribing to a worldview that combines Orthodox Christian mysticism, anti-American conspiracy theories and hedonism. This appears to be Mr. Putin's worldview, too. Since the summer of 2020, Mr. Putin and Mr. Kovalchuk have been almost inseparable, and the two of them have been making plans together to restore Russia's greatness.


According to people with knowledge of Mr. Putin's conversations with his aides over the past two years, the president has completely lost interest in the present: The economy, social issues, the coronavirus pandemic, these all annoy him. Instead, he and Mr. Kovalchuk obsess over the past. A French diplomat told me that President Emmanuel Macron of France was astonished when Mr. Putin gave him a lengthy history lecture during one of their talks last month. He shouldn't have been surprised.
In his mind, Mr. Putin finds himself in a unique historical situation in which he can finally recover for the previous years of humiliation. In the 1990s, when Mr. Putin and Mr. Kovalchuk first met, they were both struggling to find their footing after the fall of the Soviet Union, and so was the country. The West, they believe, took advantage of Russia's weakness to push NATO as close as possible to the country's borders. In Mr. Putin's view, the situation today is the opposite: It is the West that's weak. The only Western leader that Mr. Putin took seriously was Germany's previous chancellor, Angela Merkel. Now she is gone and it's time for Russia to avenge the humiliations of the 1990s.
It seems that there is no one around to tell him otherwise. Mr. Putin no longer meets with his buddies for drinks and barbecues, according to people who know him. In recent years — and especially since the start of the pandemic — he has cut off most contacts with advisers and friends. While he used to look like an emperor who enjoyed playing on the controversies of his subjects, listening to them denounce one another and pitting them against one another, he is now isolated and distant, even from most of his old entourage.
His guards have imposed a strict protocol: No one can see the president without a week's quarantine — not even Igor Sechin, once his personal secretary, now head of the state-owned oil company Rosneft. Mr. Sechin is said to quarantine for two or three weeks a month, all for the sake of occasional meetings with the president.
In "All the Kremlin's Men" I described the phenomenon of the "collective Putin" — the way his entourage always tried to eagerly anticipate what the president would want. These cronies would tell Mr. Putin exactly what he wanted to hear. The "collective Putin" still exists: The whole world saw it on the eve of the invasion when he summoned top officials, one by one, and asked them their views on the coming war. All of them understood their task and submissively tried to describe the president's thoughts in their own words.

This ritual session, which was broadcast by all Russian TV channels, was supposed to smear all of the country's top officials with blood. But it also showed that Mr. Putin is completely fed up with his old guard: His contempt for them was clear. He seemed to relish their sniveling, as when he publicly humiliated Sergey Naryshkin, the head of the Foreign Intelligence Service, who started mumbling and tried to quickly correct himself, agreeing with whatever Mr. Putin was saying. These are nothing but yes men, the president seemed to say.
As I have reported for years, some members of Mr. Putin's entourage have long worked to convince him that he is the only person who can save Russia, that every other potential leader would only fail the country. This was the message that the president heard going back to 2003, when he contemplated stepping down, only to be told by his advisers — many of whom also had backgrounds in the K.G.B. — that he should stay on. A few years later, Mr. Putin and his entourage were discussing "Operation Successor" and Dmitri Medvedev was made president. But after four years, Mr. Putin returned to replace him. Now he has really and truly come to believe that only he can save Russia. In fact, he believes it so much that he thinks the people around him are likely to foil his plans. He can't trust them, either.
And now here we are. Isolated and under sanctions, alone against the world, Russia looks as though it is being remade in its president's image. Mr. Putin's already very tight inner circle will only draw in closer. As the casualties mount in Ukraine, the president appears to be digging in his heels; he says that the sanctions on his country are a "declaration of war."
Yet at the same time he seems to believe that complete isolation will make a large part of the most unreliable elements leave Russia: During the past two weeks, the protesting intelligentsia — executives, actors, artists, journalists — have hurriedly fled the country; some abandoned their possessions just to get out. I fear that from the point of view of Mr. Putin and Mr. Kovalchuk, this will only make Russia stronger.
Mikhail Zygar (@zygaro) is the former editor in chief of the independent TV news channel Dozhd and the author of "All the Kremlin's Men: Inside the Court of Vladimir Putin."
--
****
Juan
Insurrectionists and the destruction of the principles of Democracy have no place in the United States of America.
Posted by 1ma2t