Something to Know - 20 February

Weary of the sad state of affairs in Eastern Europe, and the Trump square dancing around legal open pits, let's focus on another area; south of the border.   We all know that Mexico and its cartels have been trying to run the place with deadly behavior.  Guns made in America flood the activity, investigative journalists are gunned down, and citizens are all caught in the crossfires, and the export to the USA of deadly drugs continues.   The proximity of all this you think might stir some effort to assist Mexico in eradication of all this.  Yes we have tried in the past with wrong-headed policies, and efforts that just don't go far enough.   Now that they have messed with our prime import of Avocados, we have reacted like never before.  Mess with our appetizers, and you threaten our way of life.  There are reports that this has all been resolved and the brief ban on the import of the blessed fruit can once again flow to our tables, but what was the settlement, and are things going to continue on the same way, as long as we get our Guacamole? 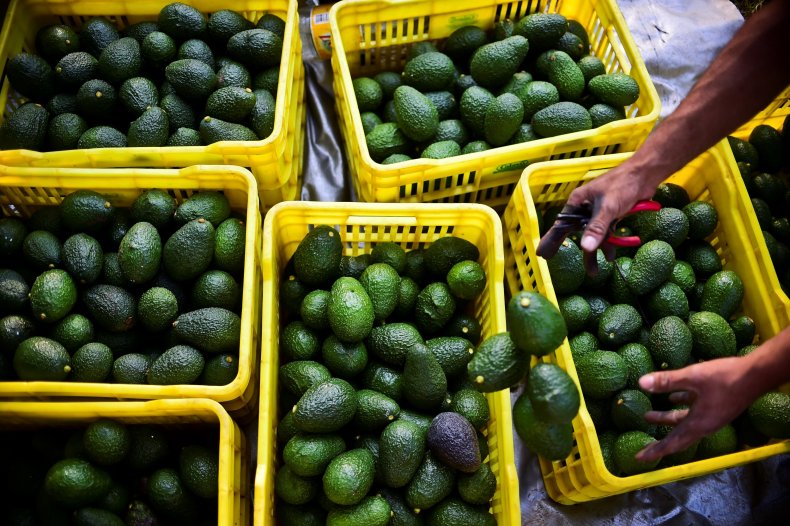 The U.S. has suspended imports of Mexican avocados—as the lucrative fruit continues to play a key role in the turf wars between drug cartels.

In a statement, the ministry said the U.S. Department of Agriculture's Animal and Plant Health Inspection Services (APHIS) is carrying out an investigation "to assess the threat and determine the necessary mitigation measures to guarantee the physical integrity of all of its personnel working in Michoacán."


The U.S. Embassy in Mexico said "facilitating the export of Mexican avocados to the U.S. and guaranteeing the safety of our agricultural inspection personnel go hand in hand."

In a tweet on Sunday night, the embassy added: "We are working with the Mexican government to guarantee security conditions that would allow our personnel in Michoacán to resume operations."


Avocados are one of Mexico's chief exports, thanks in large part to skyrocketing demand from U.S. consumers, and amount to almost $3 billion annually.

Michoacán exported over 135,000 tonnes of avocados to the U.S. in the past six weeks alone, according to the agriculture ministry.

The state produces the bulk of the country's avocados and is the only one in Mexico that is fully authorized to export to the U.S. market.


The massive growth of Mexico's avocado trade prompted rival cartels to fight to control it, as well as extort avocado farmers for money. It was revealed in 2017 that cartels had used government databases to find, extort and kidnap avocado farmers for decades.

Falko Ernst, a Mexico analyst with the nonprofit International Crisis Group, tweeted that "rather than suspending [avocado] shipments from Michoacán after a [U.S.] health inspector got a threatening call, the US should assist in developing regional action plans tackling insecurity at its roots. Hurting an economy feeding an entire region does the opposite."

The temporary suspension was confirmed late on Saturday night, the day before the Super Bowl. However, avocados for game-day consumption had already been exported.

Among the ads shown during the game was one paid for by the Mexican avocado growers and packers association, The Associated Press reported, as part of a years-long effort to make guacamole a Super Bowl staple.


It is not the first time that violence in Michoacán has threatened Mexican avocado exports.

A U.S. Department of Agriculture team of inspectors was "directly threatened" in Ziracuaretiro, a town just west of Uruapan, in 2019, according to AP.

Local authorities said a gang had robbed the truck the inspectors were traveling in at gunpoint. "For future situations that result in a security breach, or demonstrate an imminent physical threat to the well-being of APHIS personnel, we will immediately suspend program activities," the USDA wrote in a letter at the time.

--
****
Juan
Insurrectionists and the destruction of the principles of Democracy have no place in the United States of America.
Posted by 1ma2t