Something to Know - 15 February

Of interest to those who are keeping track of Trump's legal problems comes this - His accounting firm that he has had handling his financial affairs with respect to reporting and filing taxes has announced that it is quitting representing him.  Because of the investigation conducted by the New York district attorney's own investigation into the financial affairs, Mazurs USA - the firm that has represented the Trump Family Business - has said that it cannot vouch for any of the financial information that was filed on behalf of the Trumps.   In other words, even though Mazur said that they followed all accepted normal accounting principles, it is the content or the data provided to them by the Trumps that is suspect.  In short, Mazur is bailing out totally, and is saying that they cannot verify the truthfulness and accuracy of any of the documents filed.  It is doubtful that the Trump Family will be able to find any reputable accounting firm to take over, considering the circumstances.   Where all of this goes from here, is anyone's guess.  It is estimated that the Trump Family is deep in debt from around $420 million to $1.3 billion, which explains why he is trying to monetize anything that he can invent in his desperation.  Is the investigation by the Manhattan DA, and the revelation by Mazurs USA going to spur further investigation by the NY Attorney General to the Justice Department possible?   We shall see.   In any event, Trump and his kids should be worried.    Also, we have HCR, who also finds Trump's problems as an interest:

The firm, Mazars USA, said in a letter that it could no longer stand behind the annual statements, which are central to an investigation by the New York attorney general.

Donald J. Trump's longtime accounting firm cut ties with him and his family business last week, saying it could no longer stand behind a decade of annual financial statements it prepared for the Trump Organization, court documents show.
The decision, which was disclosed to the company in a Feb. 9 letter from the accounting firm, comes amid criminal and civil investigations into whether Mr. Trump illegally inflated the value of his assets. The firm, Mazars USA, compiled the financial statements based on information the former president and his company provided.
The letter instructed the Trump Organization to essentially retract the documents, known as statements of financial condition, from 2011 to 2020. In the letter, Mazars noted that the firm had not "as a whole" found material discrepancies between the information the Trump Organization provided and the actual value of Mr. Trump's assets. But given what it called "the totality of circumstances" — including Mazars' own investigation — the letter directed the Trump Organization to notify anyone who received the statements that they should no longer rely on them.
The statements, which Mr. Trump used to secure loans, are at the center of the two law enforcement investigations into whether Mr. Trump exaggerated the value of his properties to defraud his lenders into providing him the best possible loan terms.


Mazars' acknowledgment that the statements were fundamentally flawed was a potential blow to the Trump Organization as it attempts to fend off the long-running scrutiny of its finances. And for Mr. Trump, whose personal finances are intertwined with those of his family business and who has long faced questions about his taxes, Mazars is the latest in a long line of companies to break with him over the last year, following in the path of several banks, insurers and lawyers.
The disclosures about Mazars' work for Mr. Trump appeared in new court documents filed by the New York attorney general, Letitia James, who is seeking to question the former president and two of his adult children under oath as part of her civil investigation.
Mr. Trump's lawyers had asked a judge to prohibit the questioning, and in response, Ms. James's office argued in court papers last month that the company had engaged in "fraudulent or misleading" practices.
Her filing on Monday — which marked her latest attempt to press ahead with questioning Mr. Trump as well as Donald Trump Jr. and Ivanka Trump — included a copy of the Mazars letter, signed by the accounting firm's general counsel.
The Manhattan district attorney's office has been conducting a separate criminal investigation, with the assistance of lawyers from Ms. James's office.


In a statement, the Trump Organization said that while it was disappointed with Mazars' decision, it viewed the letter as confirmation that the firm's "work was performed in accordance with all applicable accounting standards and principles and that such statements of financial condition do not contain any material discrepancies."
The company argued that Mazars' characterization of its work "effectively renders the investigations by the D.A. and A.G. moot."
Mazars first moved to split with the Trump Organization last spring, and wound down its work during a transition to a new accounting firm, according to people with knowledge of the relationship. But the letter withdrawing the statements represented a sharper break, and its disclosure in the court filing was the first time the end of the business relationship has been made public.
In a statement, the accounting firm said that "under our standards of professional ethics, we cannot comment on any client services or relationships."

Sign up for the New York Today Newsletter  Each morning, get the latest on New York businesses, arts, sports, dining, style and more. Get it sent to your inbox.
The firm's brief letter could bolster Ms. James's investigation, which has focused partly on the statements and whether they overvalued Mr. Trump's various hotels, golf clubs and other properties. 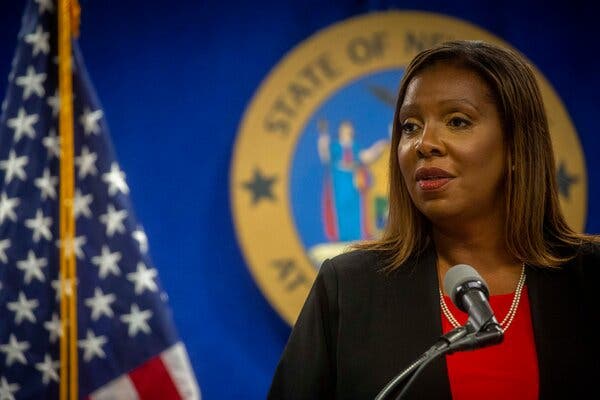 Because Ms. James's investigation is civil, she cannot file criminal charges. But she could sue Mr. Trump and his company to seek financial penalties, and could try to shut down certain aspects of Mr. Trump's business in New York.
"As the most recent filings demonstrate, the evidence continues to mount showing that Donald J. Trump and the Trump Organization used fraudulent and misleading financial statements to obtain economic benefit," Ms. James said in a statement. "There should be no doubt that this is a lawful investigation and that we have legitimate reason to seek testimony from Donald J. Trump, Donald J. Trump Jr., and Ivanka Trump."
It is unclear whether Mazars' break with the Trumps will have any bearing on the district attorney's criminal investigation into Mr. Trump. The firm has been cooperating with that investigation, and Mr. Trump's main accountant at Mazars has already testified before a grand jury hearing evidence about Mr. Trump.
Understand the New York A.G.'s Trump Inquiry

An empire under scrutiny. The New York State attorney general is currently conducting a civil investigation into former president Donald Trump's business practices. Here's what to know:
The origins of the inquiry. The investigation started after Michael D. Cohen, Mr. Trump's former personal lawyer and fixer, testified to Congress that Mr. Trump and his employees had manipulated his net worth to suit his interests.
The findings. Ms. James detailed in a recent filing what she said was a pattern by the Trump Organization to inflate the value of the company's properties in documents filed with lenders, insurers and the Internal Revenue Service.
The potential impact. Because the investigation is civil, the attorney general cannot file criminal charges and would have to sue Mr. Trump. Ms. James could seek financial penalties and try to shut down certain aspects of Mr. Trump's business.
Mr. Trump's response. Mr. Trump has filed a lawsuit against Letitia James, the New York attorney general, seeking to halt the inquiry. The suit argues that the attorney general's involvement in the inquiry was politically motivated.
Financial statements. Mr. Trump's longtime accounting firm, Mazars USA, disclosed that it could no longer stand behind annual financial statements it prepared for him. The statements are at the center of Ms. James's investigation.

The office of the district attorney, Alvin Bragg, declined to comment.
Both investigations still face obstacles. While the statements may contain exaggerated estimates of Mr. Trump's property values, those same documents also include a number of disclaimers, including acknowledgments that Mr. Trump's accountants had neither audited nor authenticated his claims.
Another disclaimer notes that Mazars did "not express an opinion or provide any assurance about" the statements, a common caveat in statements of financial condition. The firm also disclosed that, while compiling the information for Mr. Trump, it had "become aware of departures from accounting principles generally accepted in the United States of America."
Mr. Trump's lawyers would likely argue that his lenders, sophisticated financial institutions like Deutsche Bank, would not have relied on the statements when providing him loans.

Still, in her court filing last month, Ms. James highlighted potential misleading statements about the value of at least six Trump properties, including golf clubs in Westchester County, N.Y., and Scotland, as well as Mr. Trump's own penthouse home in Trump Tower. 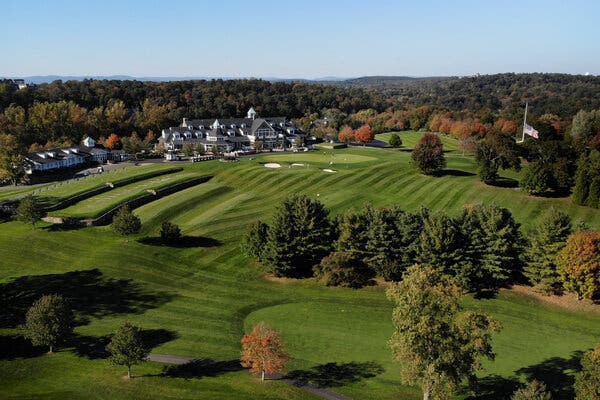 According to that filing, Mr. Trump claimed that the triplex apartment spanned 30,000 square feet, giving it an eye-popping value of $327 million. In truth, the apartment was 10,996 square feet.
Mr. Trump's long-serving chief financial officer, Allen H. Weisselberg, later acknowledged to investigators that the company had overvalued the apartment by "give or take" $200 million.
Separately, Mr. Weisselberg and the Trump Organization were indicted last summer and accused of orchestrating a 15-year scheme to provide certain executives with off-the-books luxury perks like free cars and apartments. Mr. Weisselberg and the company have pleaded not guilty and the case is tentatively scheduled to go to trial late this summer.
Both the civil and criminal investigations have examined the underlying information the Trump Organization provided Mazars as the accountants compiled the annual financial statements.
Often, Mr. Trump's company would estimate the value of its properties based on recent selling prices of comparable buildings, a common real estate valuation method. The authorities have zeroed in on whether the company cherry-picked favorable information to essentially mislead Mazars into presenting an overly rosy picture of Mr. Trump's finances.
Ms. James has argued that the Trump Organization misstated the value of the properties to lenders, insurers and the Internal Revenue Service. Many of the statements, she argued in the filing last month, were "generally inflated as part of a pattern to suggest that Mr. Trump's net worth was higher than it otherwise would have appeared."

Ben Protess is an investigative reporter covering the federal government, law enforcement and various criminal investigations into former President Trump and his allies. @benprotess
--
****
Juan
Insurrectionists and the destruction of the principles of Democracy have no place in the United States of America.
Posted by 1ma2t