Something to Know - 30 August

The Southern states will eventually emerge from the crippling effects of hurricanes, but will they survive the ravages of continuing ignorance and stupidity?   HCR is off today. 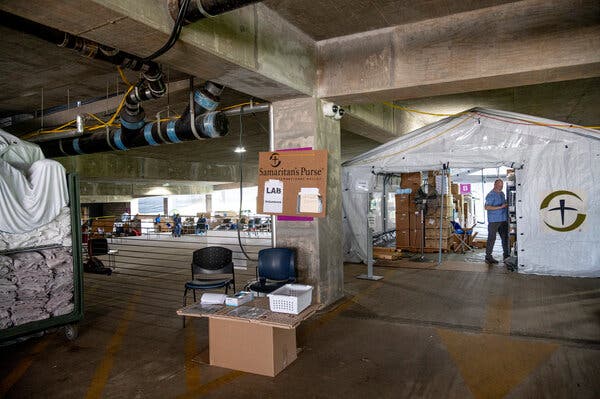 The field hospital set up inside a parking garage next to the University of Mississippi Medical Center is equipped with five intensive care beds and 27 acute care beds.Credit...Emily Kask for The New York Times
https://www.nytimes.com/2021/08/29/us/when-the-new-covid-surge-struck-mississippi-was-uniquely-unprepared.html?campaign_id=2&emc=edit_th_20210830&instance_id=39150&nl=todaysheadlines&regi_id=2318049&segment_id=67598&user_id=af58c63b30a52a2ca05d6e1633e35b95

When the New Covid Surge Struck, Mississippi Was Uniquely Unprepared

Poverty and politics have left the state with fewer doctors and nurses than it needs and hospitals on the brink of shutdown.

JACKSON, Miss. — On the ground floor of a parking garage at the University of Mississippi Medical Center, there are coronavirus patients where the cars should be — about 20 of them on any given day, laid up in air-conditioned tents and cared for by a team of medical personnel from a Christian charity group. Another garage nearby has been transformed into a staging area for a monoclonal antibody clinic for Covid-19 patients.

These scenes, unfolding in the heart of Mississippi's capital city, are a clear indication that the health care system in the nation's poorest state is close to buckling under the latest avalanche of cases triggered by the highly contagious Delta variant of the virus.
"We have reached a failure point," LouAnn Woodward, the medical center's top executive, said late last week. "The demand has exceeded our resources."

The current coronavirus spike has hit the South hard, but a combination of poverty and politics made Mississippi uniquely unprepared to handle what is now the worst coronavirus outbreak in the nation. The state has fewer active physicians per capita than any other. Five rural hospitals have closed in the past decade, and 35 more are at imminent risk of closing, according to an assessment from a nonprofit health care quality agency. There are 2,000 fewer nurses in Mississippi today than there were at the beginning of the year, according to the state hospital association.
"If you look around, the state's hospitals were in bad shape before there was such a thing as Covid," said Marty Wiseman, an emeritus political science professor at Mississippi State University. "It was not a good time to layer a pandemic on top of that."

Mississippi has waged decades of political battles over health care policy that can run almost as hot as the fights over the symbols of the old Confederacy. Most crucially, the state rejected a proposal to expand Medicaid, the federally subsidized health insurance program for low-income residents, a decision that critics say has deprived Mississippi of a much-needed infusion of federal money that might have strengthened small hospitals on the brink of failure and allowed them to recruit and retain doctors and nurses. That debate is being revisited by advocates who hope the pandemic will force a new reckoning.
What Mississippi has been left with, after years of infighting, is a system believed to be the weakest in the nation. According to a 2020 report from the Commonwealth Fund, a New York nonprofit group, Mississippi ranks at or near the bottom among states on key health care measurements, including infant mortality, childhood and adult obesity, and adults who have gone without care because they could not afford it.

The hospitals that have shut down in recent years cited the same factors plaguing many of those still operating in the state: not enough money from patients with private insurance, not enough government help to care for the poor. Money is also at the root of the health care personnel shortage: Doctors and nurses can often make significantly more money elsewhere.
The hospital closures have meant real challenges for local communities. Quitman County Hospital, in a sparsely populated corner of northwest Mississippi, was the only hospital in a 25-mile radius when it closed, creating a particular hardship in medical emergencies. In Newton, a small community about 65 miles east of the capital, the shutdown of Pioneer Community Hospital meant the loss of 150 jobs.
And across the state, a shortage of health care workers has shrunk access to high-quality care. The dearth of physicians is so acute in some areas that in 2019, before the pandemic, legislators considered exempting newly licensed doctors from paying income taxes for 10 years if they agreed to work in underserved communities.

Mississippi, as of Friday, was averaging 108 new cases per 100,000 residents over a seven-day period — a crisis fueled by a dismal statewide vaccination rate of 37 percent and made worse by a shortage of professionals to care for the sick. Memorial Hospital in Gulfport has canceled brain and heart surgeries due to a lack of available intensive care unit beds. Most days, Dr. Woodward's hospital, the largest in the state, has upward of two dozen patients waiting in the emergency ward and other parts of the hospital for intensive care beds to free up. State officials are even trying to outsource some of the state's sickest patients; Kentucky's public health commissioner, Steven J. Stack, said this week that hospitals in his state had fielded requests from Mississippi officials who were hoping to send them "I.C.U.-level-care patients."
But as Mississippi opens its new war on the virus, it can sometimes seem like a state at war with itself.
Gov. Tate Reeves, a first-term Republican, recently declined to call a special session of the Legislature, a move supported by legislative leaders who had hoped to quickly allocate $1.8 billion in federal relief money to state health workers.

The Reeves administration announced last week that it was signing up more than 1,000 contract health care workers to address the hospital labor shortage, at a cost of $10 million per week — a cost that will eventually be borne by the federal government. The news was at once welcomed by beleaguered frontline health workers and derided as hypocritical by critics of Mr. Reeves, who declared in his first State of the State address that "big government intervention creates as many problems as it solves."
"The big government that some in the state are critical of has basically come here to save our collapsing health care system," said Derrick T. Simmons, a Democrat and the State Senate minority leader.
Though Mr. Reeves has encouraged vaccinations and mask wearing to combat the virus, he has also sent mixed messages, calling the latest guidance from the Centers for Disease Control and Prevention on indoor mask wearing "foolish." He recently upbraided a reporter for wearing a mask at an indoor news conference, calling it an act of virtue signaling.
Still, persuading people to get the vaccine has become a top priority. Archie Manning, the former University of Mississippi football star, recently recorded a radio spot in which he encouraged residents to get a shot. "We know the vaccine works," Mr. Manning says in the ad, "but only if you get it."

The message hasn't reached everyone. Last week, the state government warned that increasing numbers of Mississippians were calling the state poison control center after ingesting a drug often used for livestock deworming, which some erroneously believe can protect against the virus.
That same day on WMPR 90.1 FM, a community radio station in Jackson, listeners heard a fiery sermon by a pastor who argued that Covid precautions were unnecessary for those who enjoyed God's protection.

Those interested in improving health care in the state have long faced daunting odds. A succession of conservative governors has decried the cost of Medicaid, which is shared by the federal and state governments. Former Governor Haley Barbour, a Republican who served from 2004 to 2012, backed steep cuts to the program, including a divisive plan, eventually blocked by a judge, to remove 65,000 older adults and disabled people from the Medicaid rolls. He also suggested that people were gaming the system.
"Forgive me if I think people who work two or three jobs to pay for health care for their families shouldn't be forced to pay for health care for people who can work, but choose not to," he said in 2011.
Mr. Barbour's successor, Phil Bryant, torpedoed a state health insurance exchange meant to be a component of President Barack Obama's Affordable Care Act. Mr. Bryant said at the time that he did not want to support Obamacare, as the act is known, because he feared it would saddle the state with oppressive debts related to Medicaid.
Mr. Reeves and the Mississippi Legislature — like the legislative bodies in a dozen states with Republican-controlled statehouses — continue to oppose Medicaid expansion, despite a renewed push for the program from state health care advocates who insist that money from the program might have helped Mississippi better weather the pandemic.
Mississippi's hospitals have even proposed a plan that would cover the state government's share of the cost with a tax on the hospitals themselves and small monthly premiums for those who would sign up.
In Hattiesburg, Phyllis Chambers-Berry, the chief nursing officer at Forrest General Hospital, said she believed that expanding Medicaid before the pandemic would have left her hospital in a stronger position to deal with the Delta variant. Now, with her hospital's 50 intensive care beds full, she said she was hoping the state would send 26 contract workers who would allow the hospital to open 10 more beds.
Those workers would represent just a fraction of what Forrest General actually needs. The hospital has 240 nursing jobs that are unfilled, Dr. Chambers-Berry said. Of those who remain, she said, "I could tell you from the looks on their faces — they're exhausted."

Richard Fausset is a correspondent based in Atlanta. He mainly writes about the American South, focusing on politics, culture, race, poverty and criminal justice. He previously worked at The Los Angeles Times, including as a foreign correspondent in Mexico City. @RichardFausset
--
****
Juan
Three things to ponder for today:
Posted by 1ma2t