Something to Know - 6 June

It is awfully tempting to just chuck it all in and quit trying to stay up with all the news; it is mostly all very depressing at the moment.   Trump's continuing sore loser antics, the Robert's Supreme Court on the verge of overturning any and all recent (like within the last 30 years) progressive legislation.   The screwy and continuing Jim Crow workings to disenfranchise minority participation in elections.  Yesterday's ruling by a federal judge in San Diego that California's ban on assault weapons is unconstitutional.  The growing realization that Russian hackers are getting very expert at tearing down our economy and trust in government.   And now there is a global realization that food is getting hard to come by.  Sailing away on a boat with lots of food and booze, no internet, but lots of good books for the duration; but how for how long? sounds nice.   And now, as most people in the West try and understand, but not yet cope, the fear of running low or out of water will soon be on the top of the list of our biggest problems.   Any ideas on where we are going?   Any ideas on where this will end?   Trying to stay up with all the world's problems is not good for one's health right now.   Maybe HCR's topic can soothe you,.....or maybe not:
https://www.nytimes.com/article/drought-california-western-united-states.html?campaign_id=2&emc=edit_th_20210606&instance_id=32393&nl=todaysheadlines&regi_id=2318049&segment_id=60024&user_id=af58c63b30a52a2ca05d6e1633e35b95

The Western Drought Is Bad. Here's What You Should Know About It.

Answers to questions about the current situation in California and the Western half of the United States. 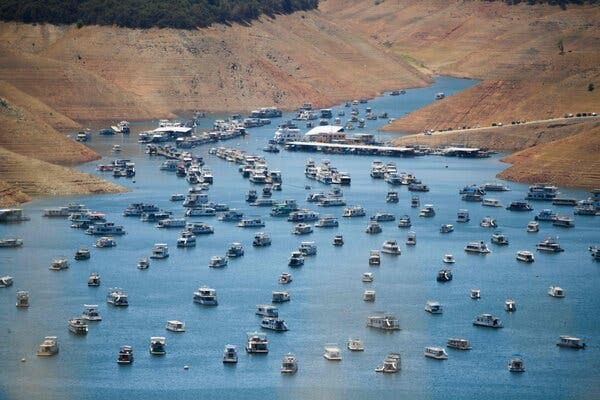 Houseboats on the shrinking Lake Oroville reservoir in California last month. Many have now been removed from the lake.Credit...Patrick T. Fallon/Agence France-Presse — Getty ImagesBy Henry Fountain
Much of the Western half of the United States is in the grip of a severe drought of historic proportions. Conditions are especially bad in California and the Southwest, but the drought extends into the Pacific Northwest, much of the Intermountain West, and even the Northern Plains.
Drought emergencies have been declared. Farmers and ranchers are suffering. States are facing water cutbacks. Large wildfires are burning earlier than usual. And there appears to be little relief in sight.
What is a drought, exactly?
There are no precise parameters that define a drought, but it is generally understood to mean a period of abnormally dry weather that goes on for long enough to have an impact on water supplies, farming, livestock operations, energy production and other activities.
A drought usually starts with less-than-normal precipitation (and what is normal varies from region to region). If the dryness persists, river flows and reservoir and groundwater levels start to decline. Warm temperatures have an impact, too, causing winter snowpack to melt faster, which can affect the availability of water throughout the year. Excessive heat also causes more evaporation from soils and vegetation, which can lead to crop failures and increases the risk of severe wildfires.

Experts with the United States Drought Monitor, a collaboration of several federal agencies and the University of Nebraska-Lincoln, assess the severity of drought in a given area, ranking it from moderate to exceptional. They take many factors into account, including precipitation totals, snowpack, stream flows and soil moisture measurements, and use images from remote-sensing satellites to assess the health of vegetation.

How bad is the current drought in the West?
It's very bad, both in terms of the size of the affected area and the severity. The latest map from the drought monitor shows that all or nearly all of California, Oregon, Nevada, Arizona, New Mexico, Utah and North Dakota are in drought, and in large areas of those states conditions are "severe" or "exceptional." Colorado, Idaho, Washington, Montana, South Dakota and southwestern Texas are also affected.
But maps tell only part of the story. The drought is having enormous effects throughout the West, where the demand for water has increased greatly over decades as the population has grown.

In New Mexico, farmers along the Rio Grande were urged not to plant this year. Crop failures have been reported in Colorado and other farming areas. The level of Lake Mead, the huge reservoir on the Colorado River, is so low that Arizona, Nevada and other states will likely face cutbacks in supplies. In North Dakota, ranchers are trucking water and supplemental feed for their livestock because the rangelands are so dry and the vegetation is stunted.

California Conservation Corps firefighters cleared dead logs, branches and other potential fuel for wildfires from an area near Lake Oroville.
Credit...
Patrick T. Fallon/Agence France-Presse — Getty Images
Conditions are especially dire in California. Reservoirs in the state hold about half as much water as usual for this time of year. The federal government has cut water allocations from its huge Central Valley Project to California cities and farmers by 75 percent. And on the Oregon border, there is not enough water for both endangered fish and farmers.
Wildfires of a size normally seen in summers have already occurred in California, Arizona and New Mexico. Experts are concerned that this summer's wildfires will be severe and widespread.
Isn't much of the West normally dry? Is drought part of a natural cycle?
It is true that much of the West is normally hotter and drier than other parts of the country. Much of the Southwest and parts of Southern California are desert. Las Vegas, for example, averages about four inches of rain a year, about a 10th of the national average. Much of the rest of California has a Mediterranean climate, which can be wet in the winter but is hot and dry in summer.
Water has always been an issue in the West, and over the past century hundreds of billions of dollars have been spent on infrastructure to bring water from its source — largely the mountains — to cities and farms.
It is also true that droughts are a normal part of life in the region, as they are around the world. They've occurred regularly throughout the centuries.
But scientists say that climate change, in the form of warming temperatures and shifts in precipitation, is making the situation worse. What would be a moderate drought in a world without warming is now more severe.

Areas that might have normally gone a few weeks without rain may now go a few months without a drop. In the mountains, more precipitation falls as rain rather than snow, decreasing snowpack. Even a decent snowpack melts faster now, making it harder to manage water supplies. And soils and vegetation lose more moisture as temperatures rise.

When will the drought end?
Meteorologists expect it will last through the summer. They are forecasting continued hot and dry conditions across the West over the next few months.
The fall and winter are usually wetter in California and the Pacific Northwest, so that may help. A pattern of summer storms known as the Southwest monsoon may help in Arizona, New Mexico and other areas. But the monsoon is unpredictable — the 2019 and 2020 monsoon seasons brought so little rain they were referred to as "nonsoons," and are one reason the drought is so severe this year.
But even if late 2021 and early 2022 are wetter in the West, the reprieve may be only temporary for much of the region. Another hot spring and summer next year could rapidly deplete snowpack, streams and reservoirs, and dry out the soil once again, and drought could return.
That's been the pattern since 2000 in the Southwest. While there have been a few wet years during that time — 2019 being the latest — the drought has persisted. It would take several wet years in a row to banish the drought completely, and while the natural variability of climate means that such a long wet spell cannot be ruled out, climate change makes it less likely.
The drought has persisted for so long in the Southwest that some scientists say a megadrought is emerging in the region, one that is similar to, or perhaps worse than, some that have occurred over the last 1,200 years and lasted for 40 years.
--
****
Juan
Hitching one's wagon to a star was Ralph Waldo Emerson's advice for setting a high standard goal.
However, when a political party is all in on hitching its wagon to Trumpism, one has to wonder what
goal is being set for such a lowly mark.
Posted by 1ma2t