Something to Know - 7 May

Today we are now aware that Trump's personal lawyer is in deep legal problems in an assortment of issues.   This has caused him to run up some massive legal fees to defend, and he has cut his staff that follows him around town from 5 to one part-time driver.  Rudy Guilliani is running out of money in the process, and is casting about for the equivalent of a go-fund-me effort from anyone (the GOP, and Trump) for help.   He is in the process of negotiating with the Justice Department and the Southern District of New York for leniency, which means he may cooperate (as did Michael Cohen).   This may not be the biggest story out there, including the orbiting space junk of a 2-ton booster crashing back to earth by this weekend.  After you read this from HCR, you can check out this sad incident that the LA Times has provided about a very nasty woman in San Dimas California who spewed out some vitriol against a CHP officer who pulled her over for using her cell phone while driving:
Woman goes on racist rant during L.A. County traffic stop, tells deputy 'you'll never be white' 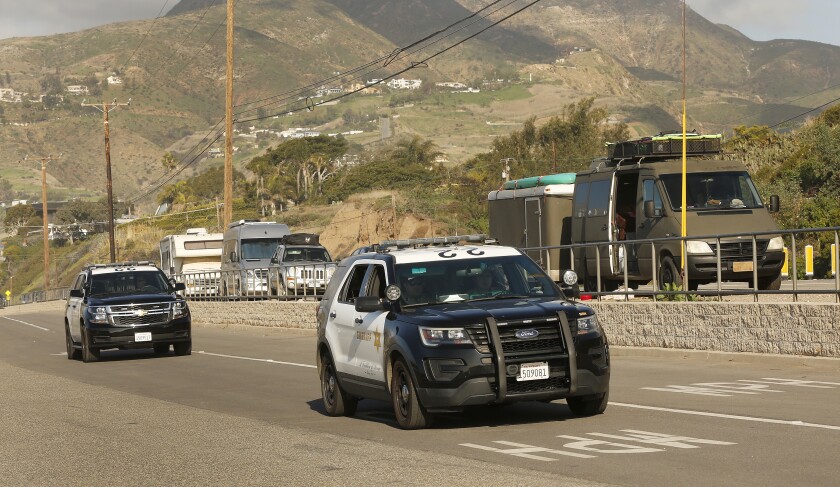 L.A. County sheriff's vehicles during a homeless count in Malibu in 2020. (Al Seib/Los Angeles Times)
By HAYLEY SMITHSTAFF WRITER
MAY 6, 2021
A traffic stop took an ugly turn last month when the driver unleashed a racist tirade on a Los Angeles County sheriff's deputy.
The April 23 exchange in San Dimas was recorded on the deputy's personal body camera, which captured the woman calling him a "murderer" and a "Mexican racist," after he pulled her over for using her cellphone while driving.
"You're always going to be a Mexican," she can be heard saying to the deputy, who has not been identified. "You'll never be white, which is what you really want to be. You want to be white."
The video has been viewed more than 5.6 million times since an edited version was uploaded -
https://www.youtube.com/watch?v=WRBOV-7nox4
The woman later filed a personnel complaint against the deputy for "discourtesy," and the incident is under investigation, sheriff's officials said.
Sheriff Alex Villanueva commended the deputy for his demeanor, which he described as an example of "professionalism and patience."

In the video, the woman described herself as a teacher and said she left her driver's license at home. She denied using her phone while driving and said she was using the device to record the deputy because he was scaring her.

"You're threatening to kill me and my son," she said. She also asked for his supervisor and called him a "murderer" several more times.
The edited video, which is about two minutes long, later shows the deputy's supervisor arriving at the scene.
"He's only citing you for using your cellphone while you're driving. That's it," the supervisor said.
The woman has not been publicly identified. Los Angeles Southwest College said on Twitter that she may have been a former employee who last worked at the college in 2017.
Sheriff's officials said she has filed at least one prior complaint against the department.
Although it is illegal to have your phone in your hand while driving in California, some experts said the woman's defense — that she was using the device to film the deputy — is a legal gray area.
"The prohibition against using cellphones behind the wheel is to prevent distracted driving," said Jody Armour, a law professor at the University of Southern California. "But if I'm using it to record a threat ... there's room at least for argument."
He said that the woman, whose race in the video is unclear, may have reacted negatively to the deputy because of well-publicized "fraught interactions" with law enforcement, including some stemming from traffic stops that ended violently.
But, he added, she lost credibility when she got personal.
"It assumes that you know what the motivations of this particular [deputy] are," Armour said of her actions. "It is unfortunate."
John Myers, a visiting professor of law at U.C. Hastings, said the woman committed a "racist verbal attack" and that it could constitute a hate incident — an act of hostility that is motivated by characteristics such as race, religion or sexual orientation but does not rise to the level of a crime.
The body camera belonged to the deputy and was not sheriff's department equipment, according to spokeswoman Trina Schrader.
After years of delay, the department is in the process of issuing body cameras to all deputies. Schrader said the rollout is an "extensive process" that takes time. The station where the deputy works is slotted to receive the cameras this summer, she said.
Some officers without official body cameras use personal cameras or audio recorders to document public encounters and protect themselves from false allegations.
Schrader said law enforcement officials encounter hostility from the public almost daily.
"The whole thing is a bummer," she said. "But's normal for us, so we weren't very surprised by it as much as the rest of the nation is."
--
****
Juan
Hitching one's wagon to a star was Ralph Waldo Emerson's advice for setting a high standard goal.
However, when a political party is all in on hitching its wagon to Trumpism, one has to wonder what
goal is being set for such a lowly mark.
Posted by 1ma2t