Well, another day with more newsy stuff for all.  Here is HCR with some very interesting points of view on the hypocritical behavior of the Jim Crow party.   Both McConnell and McCarthy (the Mac sliders) were opposed to any action against Trump and the insurrectionists a few months ago because there needed to be investigations first.   Well, now they are totally opposed to any investigations of the immediate causes of the January 6 attempted take down.   Yes - they want to hide any exposure that any of their party members had in being complicit in aiding and abetting conspiratorial behavior in the whole mess.   So now, is an interesting article in today's Washington Post that highlights the launching of a new direction for Ford.   Their F-150 pickup truck has been the best-seller and most profitable vehicle in their lineup for many decades.  It is very popular with the images we see with cowboys, ranches, and hard-working outdoor types.   This truck offers more power and features that any common internal combustion vehicles.   If it should catch on, and it will, this will pull sentiment and understanding of electric vehicles way ahead of fossil burning motorized cars and trucks.   This is good for many reasons.  A friend of ours took us on a short drive yesterday with his new Kia Kona electric car.   Very quiet, simple, fast, and low maintenance.   This is the way of the future. 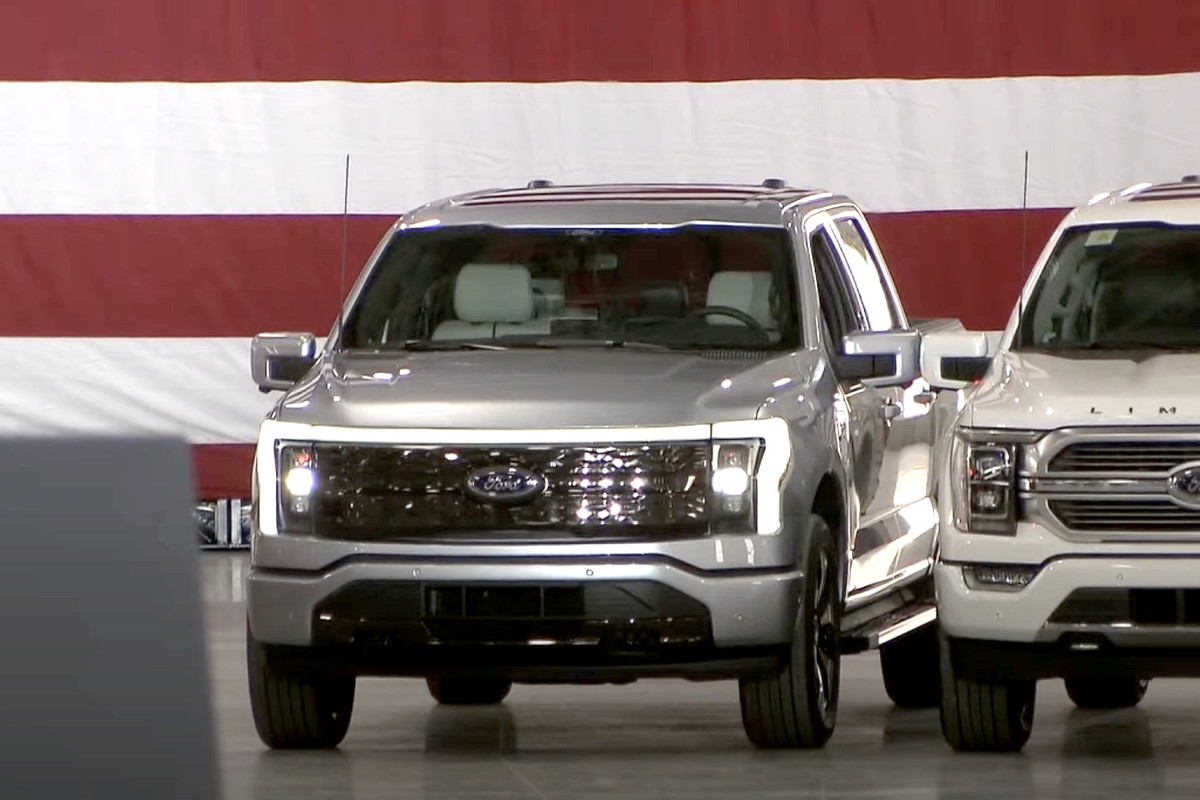 Opinion by
Catherine Rampell
Columnist
Thanks to a groundbreaking innovation by one of America's most iconic brands, "green energy" might finally escape the culture wars.
If, that is, politicians don't get in the way.

Ford unveiled an electric version of its best-selling F-150 pickup truck Wednesday. Based on the specs released so far, it looks as good as or superior to its traditional combustion-engine cousin in almost every way.

Living up to its name, the F-150 Lightning can go from zero to 60 miles per hour in 4.4 seconds. It can tow up to 10,000 pounds. Its battery can be used as a backup power source, which could power a house for up to three days, according to Ford, or charge power tools on a work site. Its standard-range battery is expected to travel 230 miles per full charge, while the extended-range battery reaches 300 miles. Not as far as the range on a gas-powered truck, of course, but still pretty good.

Then there's the price.
The base model starts at $39,974 — and that's before factoring in tax incentives for electric vehicles. Including those incentives, such as a $7,500 federal tax credit, the Lightning is expected to be one of the least expensive full-size pickups on the market, gas or electric, when it hits the road next year. Possibly the least expensive, if you live in a state offering additional generous tax breaks.

This is no pokey, jelly-bean-shaped car designed for tree-huggers. Nor is it a spaceship-like ride for Bay Area tech bros. This is not a vehicle designed for virtue-signaling concerns about climate change, though it absolutely does broadcast the virtues of a bright, decarbonized, lower-pollution future.

The Lightning will be a better, faster, more functional and more affordable truck that can appeal to red-staters and blue-collar workers. If produced and purchased at scale, trucks such as this one could revolutionize car culture and eventually shrink the country's carbon footprint. Tesla has already worked wonders in making electric vehicles (EVs) cool and more widely available. It produced about 500,000 vehicles in total last year; but as a share of the auto market, Ford's F-series is in a league of its own, with about 800,000 trucks sold last year.

You would never know such technological innovation was possible, or pretty much inevitable, from the political rhetoric surrounding electric vehicles.
Republican officials have cast EVs as a lefty pet project that Democrats want to "push" upon an unwilling public, "whether they are ready for them or not," as one GOP lawmaker recently put it. Republicans have pooh-poohed President Biden's request for funding for EV subsidies and charging stations in an infrastructure package, with Senate Minority Leader Mitch McConnell (R-Ky.) suggesting the initiative is wasteful and part of a "liberal wish-list."

Worse than withholding funds to accelerate electric-vehicle adoption, Republican officials push policies that could slow it down. They've argued, for instance, that any infrastructure package should be funded through new fees or taxes on electric vehicles — policies that would diminish the financial benefits of going electric.

Political debate around other green-energy technologies has similar contours.
Solar, wind and battery technology, for example, have gotten much cheaper, much faster than anyone predicted a decade or so ago — mostly due to human ingenuity but also thanks to other countries' industrial policies. As a result, renewables have become increasingly competitive with fossil-fuel energy sources. It's now less expensive to build and operate a new solar plant than it is to continue operating an existing coal plant.

Yet whenever Democratic politicians talk about the coming transition away from fossil fuels, they're treated as though they've made a huge gaffe, or are trying to banish coal and oil by socialist-style fiat, rather than accurately characterizing existing market forces. Republicans suggest we have to hang onto "dirty energy" because switching to renewables would raise energy prices for U.S. firms and make us less competitive.

Maybe Republicans are operating off of decades-old facts and have yet to update their understanding of how cheap and therefore economically attractive renewables have become. Or maybe it's just more politically useful to treat green energy as a cultural wedge issue, akin to guns. The Lightning — and other fast, cool, affordable products attractive to conservative and liberal customers alike — will make this strategy harder to sustain.
Our green-energy future is coming, whether politicians like it or not. The only question is whether we arrive at that future faster or slower. We can get there faster by building out more vehicle-charging stations, so consumers know they can recharge an EV as reliably as they could refill a gas tank. Or by subsidizing research and development in battery technology.

Better yet, we could put a price on carbon, to accelerate adoption of and innovation in less-carbon-intensive technologies. (Several senior economists in the Biden administration have endorsed this, though Biden himself has not.)

Alternatively, as many Republican politicians seem to prefer, we can stand athwart history yelling "stop," merely gumming up traffic.

Read more:
--
****
Juan
Hitching one's wagon to a star was Ralph Waldo Emerson's advice for setting a high standard goal.
However, when a political party is all in on hitching its wagon to Trumpism, one has to wonder what
goal is being set for such a lowly mark.
Posted by 1ma2t