Something Else to Know - 2 February

Since there are many out there who may not be familiar with the Qanon folks who, who like a virus, have infected the Republican Party, there is this story in today's NT Times.   This is what is causing MItch McConnell gas pains, and what is threatening to blow the GOP apart - well, it already has:

She embarrasses some Republicans, but she's no outlier. 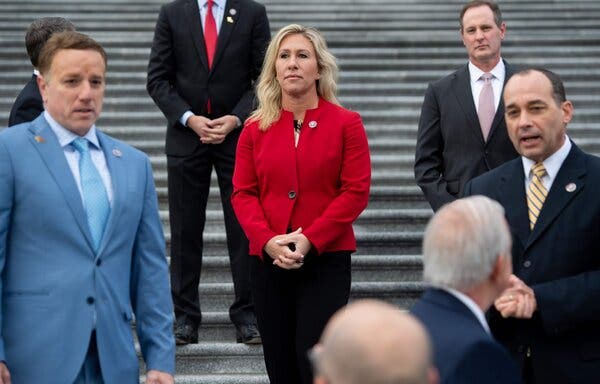 Steve King, the Republican former congressman from Iowa, must feel robbed. Two years ago, he was stripped of all his committee assignments after asking, in an interview with The New York Times, "White nationalist, white supremacist, Western civilization — how did that language become offensive?" The Republican Party threw its weight behind King's primary challenger, and he was whisked off the national stage, no longer to embarrass colleagues who prefer that racist demagogy be performed with enough finesse to allow for plausible deniability.
Since then, standards have changed. Representative Marjorie Taylor Greene, Republican of Georgia, is every bit as bigoted as King, and 10 times as unhinged. By now, you've surely heard her theory that California wildfires might have been caused by a space laser controlled by Jewish bankers. That wasn't Greene's first foray into anti-Semitism; in 2018 she shared a notorious white nationalist video in which a Holocaust denier claimed that "Zionist supremacists have schemed to promote immigration and miscegenation."
Recently, Greene met with a far-right British commentator, Katie Hopkins, who has described migrants as "cockroaches" and said she doesn't care if they die. Greene told her, "I would love to trade you for some of our white people here that have no appreciation for our country." She described the results of the 2018 midterms as "an Islamic invasion of our government." Greene endorsed calls for the execution of prominent Democrats and agreed with Facebook posts claiming that the Parkland and Sandy Hook school shootings were hoaxes. She harassed one of the Parkland massacre's young survivors.
As it happens, this week House Republicans are seeking to punish a prominent woman in their ranks — but it's not Greene. A big chunk of the House Republican caucus is reportedly trying to oust Liz Cheney of Wyoming from leadership because she voted to impeach Donald Trump for inciting the Jan. 6 insurrection.

Kevin McCarthy, the Republican House leader, is meeting with Greene, but it's far from clear that he'll act against her, because she represents much of their party's base. When The New Yorker's Charles Bethea met a group of Greene's local supporters last year, they were generally familiar with QAnon, and several agreed that Democrats are controlled by Satan. There's a reason Kelly Loeffler, who needed to get out the pro-Trump vote, touted Greene's endorsement when she was trying to hold on to her Georgia Senate seat.
The ArgumentListen to our podcast every Wednesday morning, with Ross Douthat and Michelle Goldberg
Some decent Republicans imagine they're in a battle for their party's soul. Representative Adam Kinzinger, who like Cheney voted to impeach Trump, recently started a PAC devoted to fighting the forces that led to Greene's rise and the Capitol rampage. "The time has come to choose what kind of party we will be," he said in an introductory video. The thing is, Republicans already have chosen.
Just look at the party's state affiliates. On Jan. 4, the Arizona G.O.P. retweeted a "Stop the Steal" activist who'd pronounced himself willing to "give my life" to overturn the election. Said the party's official account: "He is. Are you?" An Arizona lawmaker has since introduced a bill that would let the Legislature, controlled by Republicans, override the presidential vote of the state's increasingly Democratic citizenry.
The Oregon Republican Party approved a resolution suggesting that the Capitol siege was a "false flag" attack. The Texas Republican Party has adopted the QAnon slogan "We are the storm" as its motto, though it insists there's no connection. The chairman of Wyoming's Republican Party, who attended Trump's rally on Jan. 6, said he might be open to secession.

Greene is not the outlier in this party. Kinzinger is.
American conservatism — particularly its evangelical strain — has fostered derangement in its ranks for decades, insisting that no source of information outside its own self-reinforcing ideological bubble is trustworthy.
If you're steeped in creationism and believe that elites are lying to you about the origins of life on earth, it's not a stretch to believe they're lying to you about a life-threatening virus. If what you know of history is the revisionist version of the Christian right, in which God deeded America to the faithful, then pluralism will feel like the theft of your birthright. If you believe that the last Democratic president was illegitimate, as Trump and other birthers claimed, then it's not hard to believe that dark forces would foist another unconstitutional leader on the country.
There was a moment, after the Capitol riot, when it seemed as if a critical mass of the Republican Party was recoiling at what it had created. But the moment passed, because it would have required the party's putative leaders to defy too many of their followers. Senator Mitch McConnell floated openness to convicting Trump in a Senate trial, but ended up voting that such a trial was unconstitutional. Fox News, finger to the wind, purged many of its real journalists and gave the conspiracy theorist Maria Bartiromo a prime-time tryout.
On Monday Politico reported that if Republicans don't strip Greene of committee assignments, Democrats will try to do it, bringing the issue to the House floor. Republican members will have the chance to distance themselves from her. If they don't, it will be because they know she belongs.
--
****
Juan
When day comes, we step out of the shade, aflame and unafraid.The new dawn blooms as we free it.For there is always light,if only we're brave enough to see it.If only we're brave enough to be it.
- Amanda Gorman
Posted by 1ma2t