Something to Know - 11 September

There is no end of journalistic work that could keep you informed on the incompetence of our current president.   Books, magazines, and op-ed columnists abound with stories, actual facts, and moral judgements.   HCR buttons down her version of yesterday, and the article below is from Paul Krugman:
Opinion

Trump's Coronavirus Response Was Beyond Incompetent

He wasn't oblivious to the danger. He just didn't care. 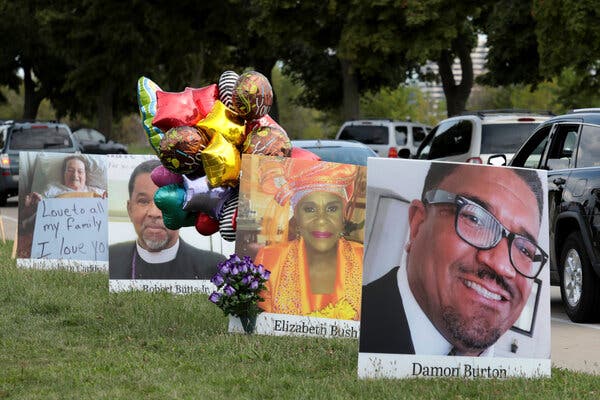 Pictures of Detroit residents who died from Covid-19 lined the street for a drive-by memorial on Sept. 1.Credit...Rebecca Cook/Reuters
Most cases in which cars kill pedestrians surely reflect negligence: drivers who were too busy talking on their cellphones or thinking about their golf games to notice the senior citizen crossing the street in front of them. A handful are acts of murder, like when a man killed a woman by plowing his car into counterprotesters at a neo-Nazi rally in Charlottesville, Va.
But sometimes drivers end up killing other people because they were engaging in clearly dangerous behavior, like driving well above the speed limit and running multiple red lights. The resulting deaths aren't considered murder. But they might be considered manslaughter, which is when you didn't specifically intend to kill someone but your irresponsible actions killed them all the same.
Until this week I thought that Donald Trump's disastrous mishandling of Covid-19 was basically negligence, even if that negligence was willful — that is, that he failed to understand the gravity of the threat because he didn't want to hear about it and refused to take actions that could have saved thousands of American lives because actually doing effective policy isn't his kind of thing.
But I was wrong. According to Bob Woodward's new book, "Rage," Trump wasn't oblivious; he knew by early February that Covid-19 was both deadly and airborne. And this isn't a case of conflicting recollections: Woodward has Trump on tape. Yet Trump continued to hold large indoor rallies, disparage precautionary measures and pressure states to reopen business despite the risk of infection.


In other words, a large fraction of the more than 200,000 Americans who will surely die of Covid-19 by Election Day will have been victims of something much worse than mere negligence.
Let's be clear: A private citizen who did what we now know Trump did would definitely be in big legal trouble. For example, think of the lawsuits likely brought against a corporate C.E.O. who knew that his company's workplace was dangerous, but lied about it, refused to take any precautions and threatened workers with dismissal if they failed to come in.
Now, Trump won't face comparable accountability, partly because of the office he holds, partly because the party he leads is totally supine and won't hold him accountable for anything. But let's hold off on the savviness for a moment, OK? The enormity of Trump's malfeasance should be the main story here, not speculation about whether he'll face any consequences.
Are there any excuses for Trump's actions? One argument you sometimes hear is that once you adjust for population you find that some European countries have lost around as many people to Covid-19 as Trump's America — although our recent rate of new deaths is much higher, so we'll soon be pulling away from the pack.


But when an ordinary citizen's actions lead to someone else's death, both circumstances and motivation matter.
Of the other high-death countries, Italy was the first Western nation to have a large outbreak, suffering many deaths before even the experts fully grasped what needed to be done.
Sweden and Britain suffered badly because they initially relied on the doctrine of "herd immunity" to resolve the pandemic. This was terrible policy, which Britain eventually abandoned. Sweden never officially changed its policy, although in practice it has ended up practicing a lot of social distancing.
But there's a big difference between mistakes, however deadly, and deliberate deception. Only in America did the head of state know that he was reassuring people about a disease he knew was both deadly and easily spread.

Trump justified his concealment of Covid-19's dangers as a desire to avoid "panic." That's pretty rich coming from the guy who began his presidency with warnings about "American carnage" and who's currently trying to terrify suburbanites with visions of rampaging Antifa hordes. But what exactly were the dangers of panic that worried him?
After all, telling the truth about the coronavirus wouldn't have been like shouting "Fire!" in a crowded theater. The only things the truth might have scared people into doing would have been staying home where possible, avoiding crowds, washing their hands and so on. And these were all things people should have been doing — in fact, once people started "panicking" in places like New York, infection rates came way down.
Of course, we all have a pretty good idea what Trump was actually talking about: All through this crisis credible sources have reported that he wanted to downplay the crisis out of fear that bad news might hurt his beloved stock market. That is, he felt that he needed to sacrifice thousands of American lives to prop up the Dow.

As it happens, he was wrong: Stocks have stayed high despite an ever-rising death toll. But the fact that he was wrong about the trade-off doesn't alter the fact that his willingness to make that trade-off was utterly immoral.
The bottom line is that it's wrong to say that Trump mishandled Covid-19, that his response was incompetent. No, it wasn't; it was immoral, bordering on criminal.
--
****
Juan
I do solemnly swear (or affirm) that I will faithfully execute the Office of President of the United States, and will to the best of my Ability, preserve, protect and defend the Constitution of the United States.
Posted by 1ma2t