Something to Know - 28 August

The party that defied the Hatch Act is over now.   The horribly worried old white guys, with maskless faces, and MAGish tin horn caps, will now venture forth in the exercise of voter suppression to hold on as best they can.  I can honestly say that I did not watch any of the production.   That does not mean that some of it did not come through to me.   It's like when you are awakened from a deep sleep, and you smell a skunk.   You are not actually out in the yard crawling with the skunk, but enough comes through the pores of homes to make you aware that some black and white mammal is not happy.  So, buckle up and be prepared for the rain of fear and chaos, for that is all that the GOP can run on; they have failed everywhere else.    David Brooks is here for your gloom recap, and Professor Heather Cox Richardson puts together a nice package that focuses on repurposing America after the deluge:

Trump and the Politics of 'Mean World'

A four-day showing of apocalypse now. 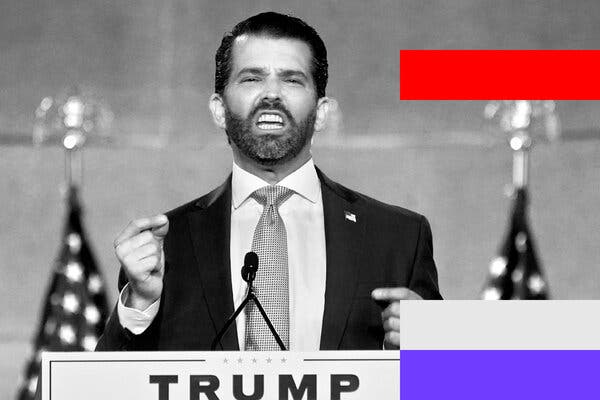 (you really need the proper genes to be as repulsive as this guy.  He had to settle for hair
on his face, since his father owns the patent on the exclusive double-back comb-over)
https://www.nytimes.com/2020/08/27/opinion/trump-republicans-2020.html?campaign_id=2&emc=edit_th_20200828&instance_id=21694&nl=todaysheadlines&regi_id=2318049&segment_id=37084&user_id=af58c63b30a52a2ca05d6e1633e35b95
I've been thinking about the two families we've encountered over the past two weeks. The Biden family is emotionally open, rendered vulnerable by tragedy and driven by a powerful desire to connect. The Trump family is emotionally closed, isolated by enmity and driven by a powerful desire to dominate.
Occasionally this week one of the female members of the Trump family would struggle to stick her head above the muck of her family's values and display some humanity. But Donald, Don Jr. and Eric showed no such impulse.
Trump family values are mean world values. Mean world syndrome was a concept conceived in the 1970s by the communications professor George Gerbner. His idea was that people who see relentless violence on television begin to perceive the world as being more dangerous than it really is.
By the 1990s it was no longer violent programing that drove mean world culture, but reality television. That's an entire industry designed to give the impression that human beings are inherently manipulative, selfish and petty. If you grow up watching those programs, or starring in them, naturally you believe that other people are fundamentally untrustworthy.

These days mean world culture is everywhere. It's a siege mentality. Menace is everywhere. We're on the brink of the cataclysm. This week's Republican convention was a four-day cavalcade of the mean world alarmism.
Mean world thrives on fear and perpetuates itself by exaggerating fear. Its rhetorical ploy is catastrophizing and its tone is apocalyptic. The Democrats are not just wrong, many speakers asserted this week, they are "subverting our republic," abolishing the suburbs, destroying Western civilization and establishing a Castro-style communist dictatorship. The Democrats, Representative Matt Gaetz of Florida said, want to "disarm you, empty the prisons, lock you in your home and invite MS-13 to live next door."

The St. Louis couple Mark and Patricia McCloskey are the team mascots of mean world. They see Black Lives Matter protesters walking past their mansion and decide they're in the middle of a race war. They come out waving their guns.
Mean world transforms people. When Kimberly Guilfoyle appeared on the Charlie Rose Show in 2004 with her husband at the time, Gavin Newsom, now the governor of California, she seemed eminently normal and kind. But now she's playing by mean world rules and at the G.O.P. convention she seemed like a bellowing lunatic.
The implicit argument of the Republican convention was that Joe Biden is too old, or soft, or compassionate to survive in mean world. He'll cower before rising crime rates. He'll get pushed around by the hard left. He'll get swallowed in the maelstrom. "You won't be safe in Joe Biden's America," is how Mike Pence put it.

This is the Republicans' strongest argument, especially if murder rates continue to soar and if Portland and Kenosha-style mayhem becomes commonplace this fall. Democrats have foolishly allowed themselves to be portrayed as the enemies of policing. There's a lot of fear floating around America right now, available to be exploited by someone.
But let's also be clear about what the real threats are. In many ways this election is about two rival versions of threat perception. It will be won by whichever party more persuasively identifies what we should fear.
Yes, there have been disgraceful scenes of far left physical and verbal brutality, which get magnified on Twitter. The far bigger threat, however, is that we have a president too busy fighting a culture war to respond to a pandemic and an economic crisis, or even to perform basic governance. What part of 180,000 coronavirus dead does Donald Trump not understand?

The larger threat is that we're caught in a polarization cascade. Mean world fanatics — on the left and right — are playing a mutually beneficial game. Trumpian chaos justifies and magnifies the woke mobs on the left. Woke mobs magnify and justify Trumpian authoritarianism on the right.

The upshot of the mean world war is the obliteration of normal politics, the hollowing out of the center and the degradation of public morality. Under the cover of this souped-up, screw-or-be-screwed mentality, norms are eviscerated, truth is massacred, bigotry is justified and politics turns into a struggle to culturally obliterate the other side.
Joe Biden is going to have to take on this widespread anxiety about personal safety by insisting that the real source of danger is Trump's chaotic incompetence and that Trump's mean world extremism is corrosive to the social order. When the social order dissolves, people suffer.

Biden could point out that disorder from left and right will only accelerate so long as Trump is in the White House. He could make clear that compassion is not weakness, that the toughest thing is to stand in a hailstorm of hatred and insist on kindness and consideration.
In a civilized society law and order is not established with a bullying jackboot. Law and order is established through the calm, regular enforcement of decency, so people across society behave like stable, honorable human beings.