Something to Know - 22 July

Yesterday's resumption of the "Coronavirus White House Task Force" (or something like that) was nothing more than a solo standup conducted by someone who looks like a 2nd grader reading from a piece of paper that he has never seen before.  It was like an infomercial hawking a very bad product.  All we got out of it is that he now apparently likes what masks are for, and that he's met Jeffrey Epstein's harem recruiter several times, and that he wishes her well.  We can rely on HCR to provide details of other newsy events , so I thought you might like to read about the Grifter-in-Chief's latest revelation.  It's not like this is the only time he is using US Ambassadors to enable his quest for unethical motives that benefit his own pockets or personal power, but just another example of a person unfit for the job he holds.

Trump's Request of an Ambassador: Get the British Open for Me

Woody Johnson, the N.F.L. owner, Trump donor and ambassador to Britain, was warned not to get involved in trying to move the tournament to a Trump resort in Scotland, but he raised the idea anyway — and he failed. 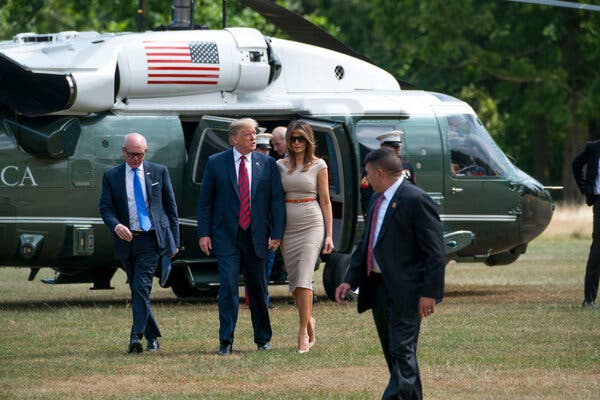 LONDON — The American ambassador to Britain, Robert Wood Johnson IV, told multiple colleagues in February 2018 that President Trump had asked him to see if the British government could help steer the world-famous and lucrative British Open golf tournament to the Trump Turnberry resort in Scotland, according to three people with knowledge of the episode.

The ambassador's deputy, Lewis A. Lukens, advised him not to do it, warning that it would be an unethical use of the presidency for private gain, these people said. But Mr. Johnson apparently felt pressured to try. A few weeks later, he raised the idea of Turnberry playing host to the Open with the secretary of state for Scotland, David Mundell.
In a brief interview last week, Mr. Mundell said it was "inappropriate" for him to discuss his dealings with Mr. Johnson and referred to a British government statement that said Mr. Johnson "made no request of Mr. Mundell regarding the British Open or any other sporting event." The statement did not address whether the ambassador had broached the issue of Turnberry, which Mr. Trump bought in 2014, but none of the next four Opens are scheduled to be played there.
Still, the episode left Mr. Lukens and other diplomats deeply unsettled. Mr. Lukens, who served as the acting ambassador before Mr. Johnson arrived in November 2017, emailed officials at the State Department to tell them what had happened, colleagues said. A few months later, Mr. Johnson forced out Mr. Lukens, a career diplomat who had earlier served as ambassador to Senegal, shortly before his term was to end.

The White House declined to comment on Mr. Trump's instructions to Mr. Johnson, as did the ambassador and the State Department.
Although Mr. Trump, as president, is exempt from a federal conflict of interest law that makes it a criminal offense to take part in "government matters that will affect your own personal financial interest," the Constitution prohibits federal officials from accepting gifts, or "emoluments," from foreign governments.
Experts on government ethics pointed to one potential violation of the emoluments clause that still may have been triggered by the president's actions: The British or Scottish governments would most likely have to pay for security at the tournament, an event that would profit Mr. Trump.

It was not the first time the president tried to steer business to one of his properties. Last year, the White House chose the Trump National Doral resort in Miami as the site of a Group of 7 meeting. Mr. Trump backed off after it ignited a political storm, moving the meeting to Camp David before canceling it because of the coronavirus pandemic.
Mr. Trump also urged Vice President Mike Pence to stay at his family's golf resort in Doonbeg, Ireland, last year during a visit, even though the vice president's official business was on the other side of the country. That trip generated headlines for the golf club, but also controversy. And Mr. Trump has visited his family-owned golf courses more than 275 times since he took office, bringing reporters with him each time, ensuring that the resorts get ample news coverage.

The Trump International Hotel in Washington has done a brisk trade in guests, foreign and domestic, who are in town to lobby the federal government. Turnberry itself drew attention when the Pentagon acknowledged it had been sending troops to the resort while they were on overnight layovers at the nearby Glasgow Prestwick Airport.

But Mr. Trump and his children have struggled for more than a decade to attract professional golf tournaments to the family's 16 golf courses, knowing those events draw global television audiences and help drive traffic. They own most of the courses outright — as opposed to simply selling the family name, as is the case with several of their hotels and residential towers — and the courses generate about a third of the family's revenue, with tournaments seen as a crucial way to publicize them.
This has been particularly important for the two Trump resorts in Scotland and one in Ireland, which have been losing money under Mr. Trump's ownership. Mr. Trump himself was intensely involved in promoting them before he was elected, regularly pushing golf writers and the editors of golf magazines to play with him, often after whisking them to Scotland on his private jet.

The losses at the British resorts have come even after the family made costly investments to build or upgrade their courses, including $150 million at Turnberry. The most recent annual report for Turnberry shows it lost nearly $1 million, on $19 million in sales, in 2018.
But the campaign to recruit tournaments has been complicated by Mr. Trump's political ascent. Executives who run the Scottish Open, for example, said in 2017 that they would most likely not hold the tournament at the Trump family's Aberdeen golf resort, even after direct appeals by Mr. Trump.
"Politics aside, Trump would be an ideal venue — but you can't put politics aside," Martin Gilbert, the chief executive of Aberdeen Asset Management, which is the lead sponsor of the Scottish Open, told reporters.


As ambassador, Mr. Johnson has had to navigate Mr. Trump's up-and-down relations with British leaders. The president soured on the prime minister at the time, Theresa May, and berated her on trans-Atlantic phone calls. His relations with Prime Minister Boris Johnson, a like-minded populist, have been warmer, though Mr. Johnson has sometimes steered clear of Mr. Trump, who is deeply unpopular in Britain.

A prominent Republican donor, Ambassador Johnson initially supported Jeb Bush for the Republican nomination in 2016, but he later backed Mr. Trump, introducing him to other figures in the party's money circles. Enlisting Mr. Johnson as an emissary on behalf of his golf course was another way the president was looking for help furthering his financial interests.
Beyond the legal and ethical red flags, asking for such a favor from his host country would put Mr. Johnson in an untenable position as the emissary of the United States.
"It is diplomatic malpractice because once you do that, you put yourself in a compromised position," said Norman L. Eisen, who served as President Barack Obama's special counsel for ethics and later as his ambassador to the Czech Republic. "They can always say, 'Remember that time when you made that suggestion.' No experienced diplomat would do that."
For Mr. Johnson, 73, London was a reward fit for the billionaire heir to the Johnson & Johnson pharmaceutical fortune. Formally known as the Court of St. James's, the assignment is the plum of the diplomatic corps — one that comes with a palatial residence, Winfield House, and entree to the highest levels of British society.
Like many political appointees, Mr. Johnson had no diplomatic experience before arriving in London. Affable and well connected, he is known mainly for the nickname Woody and his ownership of the New York Jets, a perennially struggling N.F.L. franchise. His transition to leading a large embassy was bumpy.
Mr. Johnson's throwback style has been criticized as offensive. There have been complaints that he complimented the appearances of female employees during staff meetings, and after interviewing a candidate to replace Mr. Lukens as deputy chief of mission, he asked a colleague whether she was Jewish.


The ambassador, colleagues said, forced out Mr. Lukens after hearing he gave a speech at a British university in which he told a positive anecdote about a visit Mr. Obama had made to Senegal in 2013, when Mr. Lukens was the envoy.
At least some of those complaints were raised with the department's Office of the Inspector General last fall, when a team of investigators began a routine review of diplomatic operations at the embassy. The findings were submitted in February, and the complaints are expected to be included, according to one of the investigators. It is not clear why the review has not been made public.

Neither the State Department nor the embassy addressed the accusations, but the department said Mr. Johnson had led the embassy "honorably and professionally." In a statement, it said, "We stand by Ambassador Johnson and look forward to him continuing to ensure our special relationship with the U.K. is strong."


As for Mr. Trump's request for help in getting the Open, it is not clear how much sway the British government would have had even if it had responded to Mr. Johnson's hints. The tournament is run by the R&A, a golf association based at the Royal and Ancient Golf Club in St. Andrews, which is the British counterpart to the United States Golf Association.
A spokesman for the R&A, Mike Woodcock, said a committee selects the site from a pool of 10 courses in Scotland, England and Northern Ireland based on factors like the readiness of the course and public infrastructure.
"We haven't received any approaches from the British government or the Scottish government about this," he said.

Trump, Woody Johnson and Golf
--
****
Juan
I do solemnly swear (or affirm) that I will faithfully execute the Office of President of the United States, and will to the best of my Ability, preserve, protect and defend the Constitution of the United States.
Posted by 1ma2t