Something Else to Stuff in for Today - 8 July

Well, I did find something else to stuff in for today.   Not exactly intellectually stimulating, but enough to think about as you mutter through your mask to someone nearby.  In addition to tax records, I think it would be entertaining to have the college transcripts out for public viewing.   How much did Trump pay to have someone else take his SATs?   How about if the candidates stand before a large map of Europe, or the whole world, for that matter, and see who can name all of the countries and their location.

Biden Should Not Debate Trump Unless …

Here are two conditions the Democrat should set. 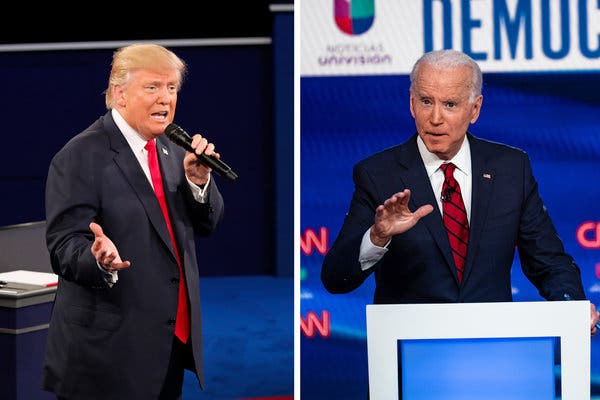 I worry about Joe Biden debating Donald Trump. He should do it only under two conditions. Otherwise, he's giving Trump unfair advantages.
First, Biden should declare that he will take part in a debate only if Trump releases his tax returns for 2016 through 2018. Biden has already done so, and they are on his website. Trump must, too. No more gifting Trump something he can attack while hiding his own questionable finances.
And second, Biden should insist that a real-time fact-checking team approved by both candidates be hired by the nonpartisan Commission on Presidential Debates — and that 10 minutes before the scheduled conclusion of the debate this team report on any misleading statements, phony numbers or outright lies either candidate had uttered. That way no one in that massive television audience can go away easily misled.
Debates always have ground rules. Why can't telling the truth and equal transparency on taxes be conditions for this one?


Yes, the fact that we have to make truth-telling an explicit condition is an incredibly sad statement about our time; normally such things are unspoken and understood. But if the past teaches us anything, Trump might very well lie and mislead for the entire debate, forcing Biden to have to spend a majority of his time correcting Trump before making his own points.
That is not a good way for Biden to reintroduce himself to the American people. And, let's not kid ourselves, these debates will be his reintroduction to most Americans, who have neither seen nor heard from him for months if not years.
Because of Covid-19, Biden has been sticking close to home, wearing a mask and social distancing. And with the coronavirus now spreading further, and Biden being a responsible individual and role model, it's likely that he won't be able to engage with any large groups of voters before Election Day. Therefore, the three scheduled televised debates, which will garner huge audiences, will carry more weight for him than ever.
He should not go into such a high-stakes moment ceding any advantages to Trump. Trump is badly trailing in the polls, and he needs these debates much more than Biden does to win over undecided voters. So Biden needs to make Trump pay for them in the currency of transparency and fact-checking — universal principles that will level the playing field for him and illuminate and enrich the debates for all citizens.
Of course, Trump will stomp and protest and say, "No way." Fine. Let Trump cancel. Let Trump look American voters in the eye and say: "There will be no debate, because I should be able to continue hiding my tax returns from you all, even though I promised that I wouldn't and even though Biden has shown you his. And there will be no debate, because I should be able to make any statement I want without any independent fact-checking."


If Trump says that, Biden can retort: "Well, that's not a debate then, that's a circus. If that's what you want, why don't we just arm wrestle or flip a coin to see who wins?"
I get why Republican senators and Fox News don't press Trump on his taxes or call out his lies. They're afraid of him and his base and unconcerned about the truth. But why should Biden, or the rest of us, play along?
After all, these issues around taxes and truth are more vital than ever for voters to make an informed choice.
Trump, you will recall, never sold his Trump Organization holdings or put them into a blind trust — as past presidents did with their investments — to avoid any conflicts of interest. Rather, his assets are in a revocable trust, whose trustees are his eldest son, Donald Jr., and Allen Weisselberg, the Trump Organization's chief financial officer. Which is a joke.
Trump promised during the last campaign to release his tax returns after an I.R.S. "audit" was finished. Which turned out to have been another joke.
Once elected, Trump claimed that the American people were not interested in seeing his tax returns. Actually, we are now more interested than ever — and not just because it's utterly unfair that Biden go into the debate with all his income exposed (he and his wife, Jill, earned more than $15 million in the two years after they left the Obama administration, largely from speaking engagements and books) while Trump doesn't have to do the same.
There must be something in those tax returns that Trump really does not want the American public to see. It may be just silly — that he's actually not all that rich. It may have to do with the fact that foreign delegations and domestic lobbyists, who want to curry favor with him, stay in his hotel in Washington or use it for corporate entertaining.


Or, more ominously, it may be related to Trump's incomprehensible willingness to give Russian President Vladimir Putin the benefit of every doubt for the last three-plus years. Virtually every time there has been a major public dispute between Putin and U.S. intelligence agencies alleging Russian misdeeds — including, of late, that the Kremlin offered bounties for the killing of U.S. soldiers in Afghanistan — Trump has sided with Putin.
The notion that Putin may have leverage over him is not crazy, given little previous hints by his sons.
As Michael Hirsh recalled in a 2018 article in Foreign Policy about how Russian money helped to save the Trump empire from bankruptcy: "In September 2008, at the 'Bridging U.S. and Emerging Markets Real Estate' conference in New York, the president's eldest son, Donald Jr., said: 'In terms of high-end product influx into the United States, Russians make up a pretty disproportionate cross-section of a lot of our assets. Say, in Dubai, and certainly with our project in SoHo, and anywhere in New York. We see a lot of money pouring in from Russia.'"
The American people need to know if Trump is in debt in any way to Russian banks and financiers who might be close to Putin. Because if Trump is re-elected, and unconstrained from needing to run again, he will most likely act even more slavishly toward Putin, and that is a national security threat.
At the same time, debating Trump is unlike debating any other human being. Trump literally lies as he breathes, and because he has absolutely no shame, there are no guardrails. According to the Fact Checker team at The Washington Post, between Trump's inauguration on Jan. 20, 2017, and May 29, 2020, he made 19,127 false or misleading claims.
Biden has been dogged by bone-headed issues of plagiarism in his career, but nothing compared to Trump's daily fire hose of dishonesty, which has no rival in U.S. presidential history. That's why it's so important to insist that the nonpartisan Commission on Presidential Debates hire independent fact-checkers who, after the two candidates give their closing arguments — but before the debate goes off the air — would present a rundown of any statements that were false or only partly true.
Only if leading into the debate, American voters have a clear picture of Trump's tax returns alongside Biden's, and only if, coming out of the debate, they have a clear picture of who was telling the truth and who was not, will they be able to make a fair judgment between the two candidates.


That kind of debate and only that kind of debate would be worthy of voters' consideration and Biden's participation.
Otherwise, Joe, stay in your basement.
The Times is committed to publishing
--
****
Juan
I do solemnly swear (or affirm) that I will faithfully execute the Office of President of the United States, and will to the best of my Ability, preserve, protect and defend the Constitution of the United States.
Posted by 1ma2t