Something to Know - 3 June

Take your mind off of the shenanigans scripted by Barr, Dufus, and other shameless and scary people back in the nation's capitol.   Japanese whiskey tastes pretty good if you are into booze right now.   Take enough of it, and you will forget all the troubles.
Some Japanese Whiskies Aren't From Japan. Some Aren't Even Whisky.
Though the spirits have won praise and high prices, Japan has few rules for what those bottles should contain. 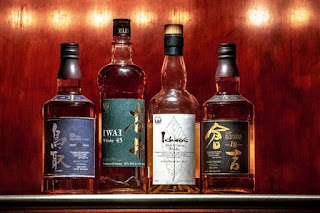 Japanese distilleries are increasingly coming clean about the foreign origins of their whisky. Several have adopted the label &ldquo;world blend,&rdquo; including Chichibu, which makes Ichiro&rsquo;s Malt &amp; Grain Whisky, second from right.
By Clay Risen
Published May 29, 2020 Updated May 30, 2020
Mamoru Tsuchiya is worried about the future of Japanese whisky. Sales are booming, but there's a problem: A large amount of the liquor isn't actually made in Japan, said Mr. Tsuchiya, one of that country's leading whiskey experts.
Some of it isn't whiskey at all.
"There are a lot of situations where you call it Japanese whisky, but they're using imported Scotch or Canadian whisky," he said.

Global demand for Japanese whisky has exploded over the last decade — bottles like the Yamazaki 18 Year Old, which once collected dust at $100, sell for five times the price and are now almost impossible to find. The dollar value of exports to America grew by nearly 50 percent in 2019 over the previous year, according to the Distilled Spirits Council of the United States.

Mamoru Tsuchiya
But unlike most whiskey-producing countries, Japan has few rules about what constitutes whiskey, let alone what makes it Japanese. Companies can buy spirits in bulk from abroad, bottle and label it "Japanese whisky," and ship it back out. They can export aged shochu made from grains, like rice or barley, for sale in America as whiskey. Some so-called distilleries don't even do any distilling; they import the whiskey in bulk and contract another company to bottle it.

It's a regulatory Wild West that both established distilleries and start-ups are taking advantage of to feed growing global demand. It's also a potential public-relations disaster: The internet is already rife with articles claiming to pull back the curtain on the myth of Japanese whisky.
While many of the premier brands, like Yamazaki and its 18 Year Old, point out that they are made exclusively in Japan, others refuse to say. "It puts Japanese whisky's reputation at risk," said Makiyo Masa, the founder of Dekanta, an online retailer.

In September Mr. Tsuchiya, who runs an advocacy organization called the Japan Whisky Research Centre, proposed a set of rules for Japanese whisky, including a requirement that it be distilled in Japan. The rules would be voluntary, but he planned to use the 2020 Tokyo Whisky and Spirits Competition, which he runs, as a carrot: Only products that met his criteria could enter as "Japanese whisky."

Mr. Tsuchiya said he had received support from most of the distilling industry, as well as the Japan Spirits and Liqueurs Makers Association, an industry-funded, government-chartered agency that helps set nationwide regulations.


But because of the coronavirus pandemic, the competition and Mr. Tsuchiya's proposed rules are on hold. While the industry and consumers wait to see what happens next, a new debate is underway: What is Japanese whisky, anyway?
Japan's laissez-faire regulatory approach is rooted, at least in part, in its complicated history with the West.

Its first recorded encounter with whiskey came in 1853, when Commodore Matthew Perry, during his inaugural visit to Japan, gave his hosts 70 gallons of Scotch and American whiskey. It was a hit among the imperial court, and the gift became a defining memory of a landmark cross-cultural encounter.

As part of its subsequent push to emulate the West, Meiji-era Japan encouraged the production of domestic versions of that same whiskey. Japanese distillers often used sweet potatoes, which were abundant, but they produced a much different spirit than the barley, corn and rye used in Scotland and America.

"From the get-go, Japanese whisky was not whiskey as the rest of the world understands it," said Liam McNulty, a Tokyo-based whiskey writer. No one gave much thought to defining it, he said, since it was entirely for domestic consumption. The bragging rights that came with having a homegrown whiskey industry, and whatever tax revenue it generated, were more important than the precision of the end product.

The first modern Japanese whisky distilleries, including Yamazaki, didn't open until the 1920s. While they were modeled on Scottish operations and often produced high-quality spirits, they did little to change the overall character of Japanese whisky, which, especially following World War II, was aimed at everyday salarymen looking for a quick drink after work.
The Japanese government introduced formal definitions for domestic whisky in 1989, but by then the industry was dominated by a few big distilling companies that wanted to keep the rules loose. After 1989, for example, whisky sold domestically had to contain at least 10 percent aged malt whisky; the rest could be unaged alcohol, typically made from imported molasses.

"The lack of regulation benefits major producers," said Stefan Van Eycken, the author of "Whisky Rising: The Definitive Guide to the Finest Whiskies and Distillers of Japan." "If the lack were a disadvantage to them, rules would be quickly be implemented."
Both domestically and internationally, interest in Japanese whisky began to pick up in the early 2000s, snowballing through the next 15 years as the industry's premium brands, like Hibiki and Yamazaki, racked up global critical acclaim. But distillers didn't have enough fully aged product to meet demand, leading many established and start-up brands to start buying in bulk from overseas.
Would you like recommendations for more stories like this?
Yes
The Japanese whisky industry can be opaque, so it is hard to know which distilleries rely on foreign sources. Still, analysts point to fast-growing exports of Scotch and Canadian whisky to Japan in recent years, even as the retail sales of those whiskeys remain flat — implying that most of the imported spirit is being bought by distilleries and relabeled as Japanese.
One company that has been open about its sources is Nikka, which makes whisky in Japan and owns the Ben Nevis distillery in Scotland. Emiko Kaji, Nikka's manager of international business development, said that domestic supply shortages force the company to use "a small amount of whiskey from overseas" to meet demand.

She also said that imported Scotch is a critical ingredient in creating Nikka's flavor profile, in the same way that an American baker might swear by French butter in making an apple pie.
"Unlike in Scotland, we do not have the custom of exchanging casks with other producers within the country," Ms. Kaji said. "In order to create a complex blended whisky to meet this demand, blenders in Japan needed to look outside our country for whisky to realize their visions."

Nevertheless, as more American whiskey fans learn that Japanese whisky isn't 100 percent Japanese, they're increasingly unhappy. Much of the critical praise over the past decade leaned on generalizations about Japanese craftsmanship and ingredients, and drinkers are understandably angry to learn that the whisky in their glass might not even be made in Japan.

Some distilleries are coming clean by labeling their whiskies "world blends," meaning a combination of imported and domestic products, said Flavien Desoblin, who carries several of these bottles at his two Manhattan whiskey bars, the Brandy Library and Copper and Oak. (These include Ao, from Suntory, one of the largest distilling companies in Japan, and Ichiro's Malt & Grain World Whisky, from Chichibu, a highly regarded craft producer.)
"I believe it's a great first step," Mr. Desoblin said. "Since we have to pay a premium for just about any whisky that comes from Japan, we need to be told the truth."
Mr. Tsuchiya wrote his proposed rules to move even further. They would re
quire distilleries to use only grain in their mash, ferment it with yeast (shochu uses a different process), distill it entirely in Japan, and then age it for at least two years in a wood cask.

"We require two years, instead of three like in Scotland, because in Japan we have a more temperate climate and whisky may age faster," he said.
So far, Japan's largest whisky companies have said they are receptive to Mr. Tsuchiya's proposal. But some experts question whether the industry will end up supporting it. Japanese whisky may have earned a global following, but its largest market is among everyday, value-conscious domestic drinkers who don't pay attention to technical details.

Mr. Van Eycken wonders if producers want to create a polarized landscape by explaining that Japanese whisky, their bread and butter, isn't what people thought it was. "Call me a skeptic, but from a business point of view, that's very unlikely."
He may be right. But if distillers end up rejecting Mr. Tsuchiya's proposals, it's possible that Japanese whisky's newfound fans will reject them in turn.
"They need to decide if their interests are good for the industry, or for consumers," said Yoshitsugu Komasa, who founded the Kanosuke distillery in southern Japan in 2017 and has pushed other craft producers to be more transparent. "If these rules are not adopted, I think things are going to get worse."
Craft Distillers Were Booming. Now They Face Bust.April 23, 2020

In the New World of Whiskeys, Australia Strives to Stand OutDec. 3, 2019

An earlier version of this article misstated one of Mamoru Tsuchiya's proposed rules for the distillers of Japanese whisky. It would allow distilleries to use any grain in their mash, not only barley.
--
****
Juan
CoronaTrump is a nasty virus, and if we distance ourselves like
Patriots, like a miracle it will all be gone in the Fall.
Posted by 1ma2t