A bit busy this morning, so sorry this is out so late.  First off, HCr has yesterday's important issue in capsule form right here .  Next is some serious funny stuff from Gail Collins:

Sending McConnell back to his old Kentucky home. 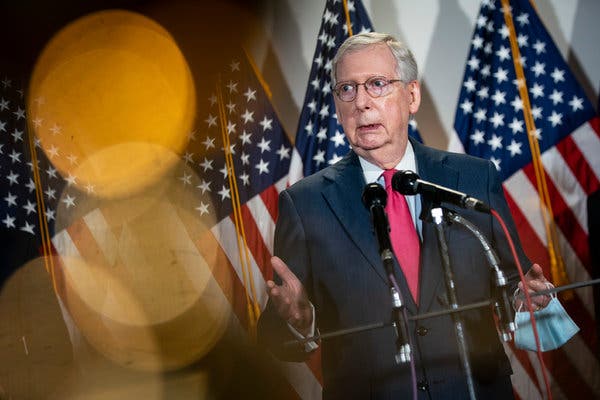 Given a choice between Mitch McConnell and Mr. Pokee the Instagram Hedgehog, which would you vote for?Credit...Al Drago for The New York Times
Mitch McConnell is up for re-election this year, and the idea of him losing is as seductive as — oh, I don't know. Dinner in a real restaurant?
Obviously, it's hard to pay attention to anything but the presidential race when John Bolton is revealing that Donald Trump did not seem to know Britain was a nuclear power and wondered if Finland was part of Russia.

But next week Democrats are going to pick a nominee to run against McConnell, and it's a real contest, full of all the same battles we went through over Biden versus Bernie. I think it would be a good idea for us to take a look at what's going on.
Really, your friends know you pay attention to this stuff and they are going to expect you to be able to give them a quick briefing over cocktails, if we ever reinvent cocktail parties.


Kentucky went for Trump by 30 points in 2016. But last year voters elected a Democratic governor, Andy Beshear, who had the advantage of running against a truly terrible incumbent, Matt Bevin. (After Bevin lost, he famously rewarded big donors by issuing 428 pardons and commutations to folks who had been convicted of everything from raping a child to murdering a parent.)
Details, details.

The Democratic Party leaders feel they have a Senate winner in Amy McGrath, a moderate former Marine fighter pilot. In passing we'll mention that McConnell dodged military service on a medical issue — something called optic neuritis.
"Those things used to matter," said John Heyrman, a political-science professor at Berea College. But now, he said, it never comes up. And optic neuritis certainly doesn't sound any more questionable than bone spurs.
Still, McGrath has run some terrific ads about her youthful dream to "fly fighter jets," her discovery that girls couldn't get those kinds of jobs, and the letter she sent seeking help from her senator (guess who), which was never answered.
Her campaign started with a splash, drawing in tons of donations from hopeful Democrats around the country. But the follow-up was a bit mixed.


For instance, when Brett Kavanaugh was up for Supreme Court nomination, McGrath first told a local paper that she would have supported him if she was in the Senate. Hours later she changed her tune "upon further reflection."
"Talking to her, she's pretty good one-on-one," said Ryland Barton, the state capitol bureau chief for Kentucky Public Radio Network. But, he added, "she kind of seems consulted to death."

Meanwhile, up popped — Charles Booker, a 35-year-old African-American state legislator. Candidate of the Bernie Bros and endorsed by A.O.C. He's been running a more exciting campaign, and Kentucky's two largest newspapers have endorsed him, mainly on the basis of his being … not boring. But it's hard to know how Kentucky will take to Medicare for All and a Green New Deal.

"It's certainly gotten a lot more interesting," said Barton.
Can a black progressive rally a huge turnout of liberals and minorities that compensates for any fallout in the middle? If there's a moment, it might be now. Kentucky is another state with a hideous racial incident in its recent past — Breonna Taylor, a 26-year-old black emergency medical technician, was shot eight times by the police who broke into her home while she slept, searching for a drug suspect who wasn't there.
Either candidate could certainly run a smart campaign, and it's hard to know how all the national trauma is affecting voters' attitudes. "There's been no polling. Nobody really knows what the state of the race is," said Heyrman.
Here we have the classic dilemma for the 2020 Democrats. Who would you want nominated for this difficult race in a purple-to-red state?
A) Moderate with a really good résumé.
B) Exciting newcomer who might be able to move the public left.


C) Anybody who can beat Mitch McConnell and I don't care if it's Mr. Pokee the Instagram Hedgehog.

OK, you're right. Mr. Pokee would be an improvement. McConnell is, of course, the guy who brags about having refused to schedule even a hearing for almost any judicial nominees during the Obama administration. Whose race to fill up the vacant court seats with Trump appointees should climax this week when he makes his Republicans vote to confirm Justin Walker, a 38-year-old family friend with minimal experience, to the second-highest court in the land.
McConnell, whose wife, a member of a family that controls a massive shipping organization, was conveniently named Trump's secretary of transportation.
This is hardly the only Senate race you're going to want to pay attention to this year. The Democrats have a bunch of exciting candidates. (And, as usual, a few accidents they'll just ignore. I'm thinking of the nominee they're trying to get rid of in Nebraska — the owner of a cupcake bakery who sent out a group text to his team describing how he imagined one of the staffers would behave during group sex.)
So, who can maul Mitch? I know you're focused on the presidential race — who isn't? But this will give you something to think about once you've exhausted your contemplation of Donald Trump's sense of geography.
--
****
Juan
Donald Trump is like a drunk driver careening down
the road of Dystopia while we should work to elect Joe Biden as our designated driver.
Posted by 1ma2t