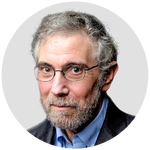 Today - two for the price of one:

By Paul Krugman
Opinion Columnist
• June 11, 2020
What is Braxton Bragg to Donald Trump, or Trump to Braxton Bragg?

It was always strange (and outrageous) to have U.S. military bases named for traitors — for Confederate generals who rebelled against the Union to defend slavery. And military leaders seem willing to change those bases' names. But Trump says no.

Why would he take that position at a time when white Americans finally seem to be acknowledging the injustice African-Americans routinely face, leading to surging public support for Black Lives Matter? The smart thing, surely, would be to emulate much of corporate America: Make a few cheap gestures on behalf of social justice while changing nothing fundamental. I mean, even NASCAR has announced that it will ban the Confederate flag at events. And renaming military bases would be very cheap.

But Trump evidently can't bring himself to make even a symbolic show of sympathy. And trying to understand his incapacity helps explain what Trumpism — and, indeed, modern conservatism as a whole — is all about.

Trump himself says that it's about honoring "a history of Winning, Victory, and Freedom." Really?

These bases honor men who stood for slavery, the opposite of freedom; and as it happens, two of the biggest bases are named for generals famed not for victories but for defeats. Bragg, whose army suffered an epic rout at Chattanooga, was one of the Civil War's worst-regarded generals. John Bell Hood squandered his men's lives in futile attacks at Atlanta and Franklin, then led what was left of his army to annihilation at Nashville.

Trump obviously doesn't know about any of that. But why should a guy who grew up in Queens care about Confederate tradition in the first place?

The answer is that Trump, and most of his party, are reactionaries. That is, as the political theorist Corey Robin puts it, they are motivated above all by "a desire to resist the liberation of marginal or powerless people." And Confederate iconography has become a symbol of reaction in America.

That's why some Republicans in Maine objected to making a song about the 20th Maine — the volunteer regiment whose heroic defense of Little Round Top played a crucial role in the battle of Gettysburg — the state ballad. It was offensive, they said, to "say that we're any better than the South was." Um, the South was defending slavery.

The reactionary impulse also explains, I believe, why some privileged white men, from the editor of the influential Journal of Political Economy to the (now former) C.E.O. of CrossFit, have been unable to control self-destructive outbursts attacking the Black Lives Matter protests.

After all, from a reactionary's point of view the past three weeks have been a nightmare. Not only are marginal people who are supposed to know their place standing up for justice, they're overwhelmingly winning the battle for public opinion. That's not how things are supposed to work!

One response to this reactionary's nightmare has been denial. Trump keeps tweeting "LAW & ORDER!" as if saying the magic phrase enough times will turn the clock back to 1968. The Trump campaign responded to an unfavorable CNN poll, not by reconsidering its message, but by demanding that the network retract the poll and apologize.

Another response has been wild conspiracy theorizing. On the right, it's a given that mass popular demonstrations have been orchestrated by antifa radicals, though there's not a shred of evidence to that effect. And Trump, famously, suggested that a 75-year-old man knocked over by the police — we've all seen the video of him bleeding out on the sidewalk — was an antifa provocateur who somehow engineered his own assault.

Most frightening, however, has been the palpable desire of powerful figures on the right — not just Trump — to find a way to meet Black Lives Matter protests with state violence.

On any rational assessment, it never made any sense to demand a military response to overwhelmingly peaceful protests marred by only a small amount of opportunistic looting. Do right-wingers believe their own claims that we're beset by "mobs of violent cretins"? I doubt it.

For reactionaries, however, the horror of the situation isn't the possibility that protests might turn violent. It's the fact that the protests are happening at all.

And that's why people like Trump and Tom Cotton have been so eager to send in the military. They aren't concerned about keeping the peace; if that mattered to them, they would have reacted harshly to the spectacle of armed right-wingers threatening Michigan's State Legislature. Instead, Trump tweeted his support.

No, America's reactionaries don't want law and order; they want an excuse to crush social justice protests with a mailed fist.

For the moment, at least, America's reactionaries aren't getting their wish. Governors, mayors and, not least, the military have made it clear that they want no part of a brutal crackdown.

But don't count the reactionaries out. They remain extremely dangerous and will become more dangerous if, as seems increasingly likely, Trump finds himself staring at the prospect of electoral defeat.
--
****
Juan
Donald Trump is like a drunk driver careening down
the road of Dystopia while we should work to elect Joe Biden as our designated driver.
Posted by 1ma2t