Okay, my level of frustration and being just mildly pissed, was elevated upon delving into this short article.  See if you can maintain your cool as you read a narrative that the continued pressure of the one-tenth of one percent (really wealthy plutocrats) on the current WH occupant is any way to run a democracy that works for the people:
https://www.nytimes.com/2020/05/27/opinion/republicans-trump.html?searchResultPosition=1

Republicans Think They Can Get Away With It. They Might Be Right.

The leaders of the governing party can't seem to stop doing and proposing unpopular things.

Mr. Hacker and Mr. Pierson are the authors of the forthcoming "Let Them Eat Tweets: How the Right Rules in an Age of Extreme Inequality." 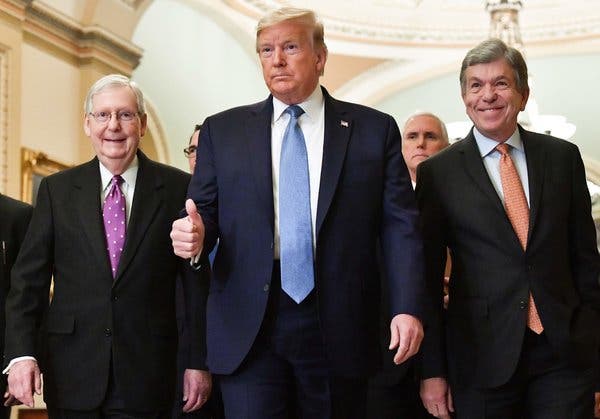 President Trump with Republican Senators Mitch McConnell (left) of Kentucky and Roy Blunt of Missouri in Washington. Credit...Nicholas Kamm/Agence France-Presse — Getty Images
Does the Republican Party have a death wish?
Its most prominent leaders — particularly President Trump and Senator Mitch McConnell, the majority leader — have dug themselves into positions that defy all conventional rules of electoral survival. In an election year, even ideologically extreme politicians should try to do popular things and avoid doing unpopular things — if for no other reason than so that they can resume pursuing their extreme goals after Election Day.
Instead, top Republicans in Washington are pulling out all the stops to do unpopular things and avoid doing popular things. Their main proposals — more tax cuts for the rich, corporate legal immunity, pushing the post office into bankruptcy — have strikingly little support among voters, even among Republican voters. Meanwhile, they are resisting highly popular measures, such as additional relief for states, localities and ordinary workers, that would almost certainly increase their likelihood of holding onto power this fall.
This situation isn't just surreal. It's genuinely scary. In a democracy, leaders of a governing party shouldn't act as if they can brazenly defy large majorities of voters and still hold onto power. The alarm bells only get louder when you begin to examine why current Republican leaders think this way — and why they might be right.
The United States is a profoundly polarized nation. Yet despite angry protests on the far right, the pandemic has actually lessened the divide among American voters. Large bipartisan majorities favor much more aid to states, localities and workers; believe the federal government has primary responsibility for ensuring adequate Covid-19 testing; and support a cautious reopening of the economy guided by public health expertise.


By contrast, large bipartisan majorities oppose states having to declare bankruptcy; the post office going insolvent; helping out corporate executives, the wealthy and big business with bailouts and other special deals; states handling testing on their own or a quick reopening without robust safeguards.

In a few cases, they may believe voters will eventually move toward the party's stances. In others, they may be posturing so Democrats have to yield costly concessions. And yet, as the stalemate wears on, it becomes harder and harder to avoid the simplest explanation for Republicans' poisonous positions: They are devoted to them, and they think they can get away with them.
Their devotion may be shocking, but it really shouldn't be surprising. Since the 1990s, Republicans have increasingly embraced the most extreme goals of the party's corporate and big-money supporters. In 2017, Republican leaders advanced an agenda that managed to feature the two most unpopular pieces of major legislation of the past quarter century: repeal and replacement of the Affordable Care Act and big, deficit-funded tax cuts for corporations and the rich. The former barely failed. The latter narrowly passed after Republican donors made clear that, if the party didn't deliver, the funding spigot would run dry.

As the official death toll from Covid-19 passes 100,000, these plutocratic priorities look even more glaring. Amid a crisis that's laid bare American inequality, Republicans' first instinct has remained the same: to go to the mat for the superrich. They've twisted relief bills to provide unrelated tax cuts and no-strings bailouts, shuttered the Senate amid a national health and economic crisis (though opened it long enough to strong-arm conservative judges onto the bench) and continued to float toxic ideas in an election year — say, making people give up some of their Social Security benefits in return for a financial lifeline today. If there's an idea popular among conservative billionaires and nobody else, Republicans are probably pushing for it now.

But if Republicans lose big in the fall, then those who benefit from their consistent embrace of plutocracy lose, too. Why do Republicans and their organized allies think they can get away with it — or at least have a good enough chance to justify the risk?

The answer offers a stark warning about American democracy. Republicans benefit from two formidable bulwarks against electoral accountability. The first is tribalism: Republican elites have encouraged their high-turnout voting base to see every election as an epic battle to save white Christian America from a socialist, secular, gun-seizing left, with right-wing media and surrogate groups like the N.R.A. leading the charge.
The second bulwark isn't solely of Republicans' creation. Our political system guarantees less populated areas outsize clout in the Senate and gives control over election administration to the states. Republicans have built a growing advantage in rural America over the past two decades. The result is that the Senate (and, to a lesser extent, the Electoral College) remains a counter-majoritarian stronghold — not invulnerable to electoral reversal but highly resistant to it.

At the same time, Republicans in red states have used partisan gerrymandering and voter restrictions to disadvantage citizens outside their base. The latter include voter ID laws, the indiscriminate purging of the voter rolls and rules that make it harder to register, get to the polls, vote early and (especially crucial now) vote remotely. In the latest move, the Republican National Committee and other Republican groups sued California to stop the state from mailing all registered voters absentee ballots for the fall election. Besides being fundamentally at odds with democratic equality, all these efforts further undermine electoral accountability.
In the pandemic, these strategies have become much more dangerous. If Republicans stick to their unpopular positions, they will have to build their twin bulwarks even higher to escape accountability, magnifying racial and cultural divisions and undermining free and fair elections in ways that threaten not just the health of citizens but the health of our democracy
Republicans could end up losing, despite all this. But their determination to defy the most basic law of electoral gravity — that you respond to the pull of voters as an election approaches — should set off a blaring alarm. In the midst of a health and economic catastrophe, they are putting their dangerous indifference to popular sentiment to the ultimate test.

Jacob S. Hacker, a professor of political science at Yale University, and Paul Pierson, a professor of political science at the University of California at Berkeley, are the authors of the forthcoming "Let Them Eat Tweets: How the Right Rules in an Age of Extreme Inequality".
--
****
Juan
CoronaTrump is a nasty virus, and if we distance ourselves like
Patriots, like a miracle it will all be gone in the Fall.
Posted by 1ma2t