Paul Krugman writes about one leader who is as human as one could ask, including home-spun gaffes and stuff you wish he would not have said.   But good Ole Joe is man enough to admit his wrongs.  On the other hand, we have an individual, devoid of empathy, and so cowardly that he cannot stand to ever admit that he is ever wrong; ever.  HCR goes even deeper into trump's dark closet .
https://www.nytimes.com/2020/05/25/opinion/trump-biden-president.html
Opinion

In Praise of Fallible Leaders

We need a president who can admit it when he's wrong.

Last week Joe Biden made an off-the-cuff joke that could be interpreted as taking African-American votes for granted. It wasn't a big deal — Biden, who loyally served Barack Obama, has long had a strong affinity with black voters, and he has made a point of issuing policy proposals aimed at narrowing racial health and wealth gaps. Still, Biden apologized.
And in so doing he made a powerful case for choosing him over Donald Trump in November. You see, Biden, unlike Trump, is capable of admitting error.
Everybody makes mistakes, and nobody likes admitting having been wrong. But facing up to past mistakes is a crucial aspect of leadership.
Consider, for example, changing guidance on face masks. In the initial phase of the pandemic, the Centers for Disease Control and Prevention told Americans it wasn't necessary to wear masks in public. In early April, however, the C.D.C. reversed course in the light of new evidence on how the coronavirus spreads, in particular that it can be spread by people who aren't showing any symptoms. So it recommended that everyone start wearing cloth masks when outside the home.

What would have happened if the C.D.C. had refused to admit it had been wrong, keeping its initial recommendations instead? The answer, almost surely, is that the death toll from Covid-19 so far would be much higher than it is. In other words, refusing to admit mistakes isn't just a character flaw; it can lead to disaster.

And under Donald Trump, that's exactly what has happened.
Trump's pathological inability to admit error — and yes, it really does rise to the level of pathology — has been obvious for years, and has had serious consequences. For example, it has made him an easy mark for foreign dictators like North Korea's Kim Jong-un, who know they can safely renege on whatever promises Trump thought they made. After all, for him to condemn Kim's actions would mean admitting he was wrong to claim he had achieved a diplomatic breakthrough.
But it took a pandemic to show just how much damage a leader with an infallibility complex can inflict. It's not an exaggeration to suggest that Trump's inability to acknowledge error has killed thousands of Americans. And it looks likely to kill many more before this is over.
Indeed, in the same week that Biden committed his harmless gaffe, Trump doubled down on his bizarre idea that the anti-malarial drug hydroxychloroquine can prevent Covid-19, claiming that he was taking it himself, even as new studies suggested that the drug actually increases mortality. We may never know how many people died because Trump kept touting the drug, but the number is certainly more than zero.

Yet Trump's strange foray into pharmacology pales in significance compared with the way his insistence that he's always right about everything has crippled America's response to a deadly virus.

We now know that during January and February Trump ignored repeated warnings from intelligence agencies about the threat posed by the virus. He and his inner circle didn't want to hear bad news, and in particular didn't want to hear anything that might threaten the stock market.
What's really striking, however, is what happened in the first half of March. By then the evidence of an emerging pandemic was overwhelming. Yet Trump and company refused to act, persisting in their happy talk — largely, one suspects, because they couldn't bring themselves to admit that their earlier reassurances had been wrong. By the time Trump finally (and briefly) faced reality, it was too late to prevent a death toll that's about to pass 100,000.
And the worst may be yet to come. If you aren't terrified by photos of large crowds gathering over Memorial Day weekend without either wearing masks or practicing social distancing, you haven't been paying attention.

Yet if there is a second wave of Covid-19 cases, Trump — who has insistently called for a relaxation of social distancing despite warnings from health experts — has already declared that he won't call for a second lockdown. After all, that would mean admitting, at least implicitly, that he was wrong to push for early reopening in the first place. 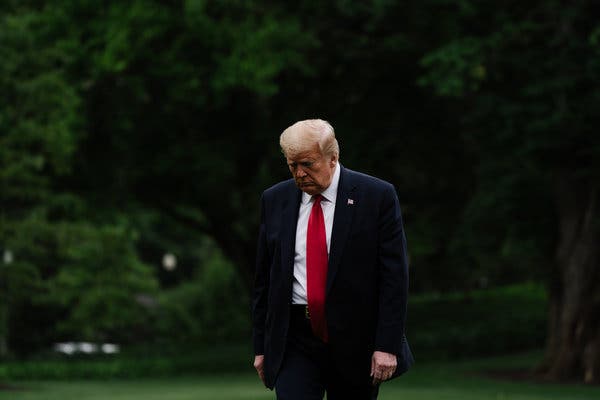 There's reason President Trump can't hold his head up high.Credit...Anna Moneymaker/The New York Times
Which brings me back to the contrast between Trump and Biden.
In some ways Trump is a pitiful figure — or would be, if his character flaws weren't leading to so many deaths. Imagine what it must be like to be so insecure, so lacking in self-regard, that you not only feel the need to engage in constant boasting, but have to claim infallibility on every issue.

Biden, on the other hand, while he may not be the most impressive presidential candidate ever, is clearly a man comfortable in his own skin. He knows who he is, which is why he has been able to reconcile with former critics like Elizabeth Warren. And when he makes a mistake, he isn't afraid to admit it.
Over the past few months we've seen just how much damage a president who's never wrong can do. Wouldn't it be a relief to have the White House occupied by someone who isn't infallible?
--
****
Juan
CoronaTrump is a nasty virus, and if we distance ourselves like
Patriots, like a miracle it will all be gone in the Fall.
Posted by 1ma2t