If you have now become an HCR fan, you can see her latest from last night by clicking here .   The concern over how the management of the lockdown and the so-called "re-opening" is the subject of this space today:

The Worst Is Yet to Come

The coronavirus and our disastrous national response to it has smashed optimists like me in the head. 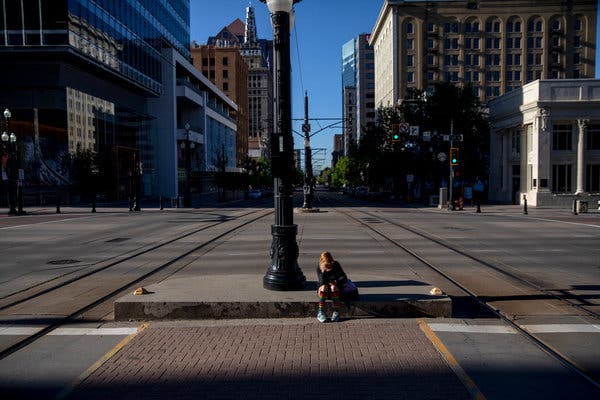 For as long as I can remember, I have identified as an optimist. Like a seedling reaching toward the golden sun, I'm innately tuned to seek out the bright side.
Of course, in recent years this confidence has grown tougher to maintain. The industry I've long covered, technology, has lost its rebel edge, and grown monopolistic and power hungry. The economy at large echoed these trends, leaving all but the wealthiest out in the cold. All the while the entire planet veered toward uninhabitability.
And yet, for much of the last year, I remained an optimist. A re-energized Democratic Party looked poised to push for grand solutions to big problems, from health care to education to climate change. There was finally some talk about reining in monopolies and creating a fairer economy. Things weren't looking good, exactly, but if you squinted hard, you could just make out a sunnier future.
Now all that seems lost. The coronavirus and our disastrous national response to it has smashed optimists like me in the head. If there is a silver lining, we'll have to work hard to find it.


To do that, we should spend more time considering the real possibility that every problem we face will get much worse than we ever imagined. The coronavirus is like a heat-seeking missile designed to frustrate progress in almost every corner of society, from politics to the economy to the environment.

The only way to avoid the worst fate might be to dwell on it. To forestall doom, it's time to go full doomer.
Why so glum? It is not just that nearly 92,000 Americans are dead and tens of millions are unemployed. It's not just that our federal government has been asleep, with Congress unable or unwilling to push a disaster-response bill on anything like the scale this crisis demands, and an inept president unable to muster much greater sympathy than, "It's too bad." It's not only that global cooperation is in tatters when we need it most.
It is all these things and something more fundamental: a startling lack of leadership on identifying the worst consequences of this crisis and marshaling a united front against them. Indeed, division and chaos might now be the permanent order of the day.
In a book published more than a decade ago, I argued that the internet might lead to a choose-your-own-facts world in which different segments of society believe in different versions of reality. The Trump era, and now the coronavirus, has confirmed this grim prediction.


That's because the pandemic actually has created different political realities. The coronavirus has hit dense, racially diverse Democratic urban strongholds like New York much harder than sparsely populated rural areas, which lean strongly to the G.O.P. That divergent impact — with help from the president and his acolytes — is feeding a dangerous partisan split about the nature of the virus itself.

Consider the emerging culture war about wearing masks or about whether to take certain unproven therapies. Look at the protests over whether it's safe to reopen. Now play these divisions forward. As The Times's Kevin Roose wrote last week, when a vaccine does emerge, what if many Americans, fed on anti-vax rumors, simply refuse to take it?
The virus's economic effects will only create further inequality and division. Google, Facebook, Amazon and other behemoths will not only survive, they look poised to emerge stronger than ever. Most of their competition — not just small businesses but many of America's physical retailers and their millions of employees — could be decimated.
Worst of all, it's possible that the pain of this crisis might not fully register in broad economic indicators , especially if, as happened after the 2008 recession, we see a long, slow recovery that benefits mainly the wealthy. There are already signs that this is happening: Thousands died, millions lost their jobs, but stock indexes are rebounding.

The economic impacts feed into the political ones: The virus-induced recession could further destroy the news industry and dramatically reduce the number of working journalists in the country, our last defense against misinformation.
Even worse, the virus is making a hash of emerging solutions to entrenched problems. As The Times's Conor Dougherty chronicled in "Golden Gates," his recent book on America's housing crisis, activists have lately been finding success in pushing to build more housing in restrictive regions like the San Francisco Bay Area. The virus may put such reforms on ice. And consider the grim future of public transportation after the pandemic: Will people just get back in their cars, driving everywhere they go?
I called a few economists, activists and historians to discuss my growing alarm about the future. Many were less pessimistic than I am; some suggested that the virus could prompt much-needed action. The most instructive example is the Great Depression. In the 1930s, after years of inaction, reformers who came into office with Franklin D. Roosevelt were able to push through laws that improved American life for good.


Matt Stoller, an antimonopoly scholar at the American Economic Liberties Project, a think tank, agreed that this crisis could be the jolt we need to fix American institutions. But he also noted that the United States has failed to make the best of our most recent national calamities. The 9/11 attacks pushed us into needless quagmires in the Middle East. The 2008 recession deepened inequality.
Let us not squander another crisis. We need to take a long, hard look at all the ways the pandemic can push this little planet of ours to further ruin — and then work like crazy, together, to stave off the coming hell.

Office Hours With Farhad Manjoo
Farhad wants to chat with readers on the phone. If you're interested in talking to a New York Times columnist about anything that's on your mind, please fill out this form. Farhad will select a few readers to call.

--
****
Juan
CoronaTrump is a nasty virus, and if we distance ourselves like
Patriots, like a miracle it will all be gone in the Fall.
Posted by 1ma2t