Something to Know - 24 April

Like a flash fire, we all know about Dr. DJ Trump, whose speciality is in insidious medical practices, and his suggestion that sick people receive pulmonary injections of either Lysol, bleach, or similar household disinfectants, as a sure fire way of killing the Covid-19 problem (the cure is worse than the disease?).   What we now know is that his side-kick in the Senate is not the only one to come up with equally hideous statements.   Paul Krugman writes in today's NY Times:

McConnell to Every State: Drop Dead

Blocking federal aid is vile, but it's also hypocritical. 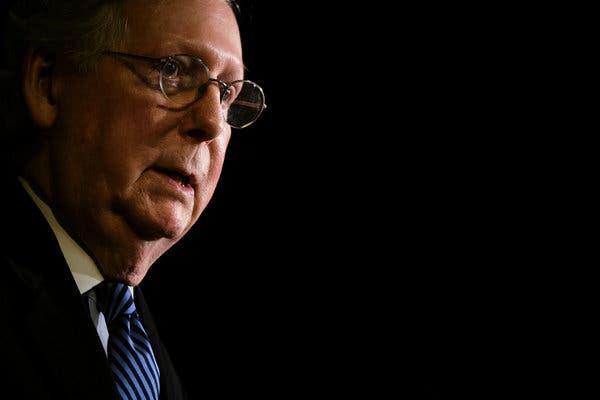 Covid-19 has killed tens of thousands of Americans, and will clearly kill many more. The lockdown needed to contain the coronavirus is causing an economic slump several times as deep as the Great Recession.

Yet this necessary slump doesn't have to be accompanied by severe financial hardship. We have the resources to ensure that every American has enough to eat, that people don't lose health insurance, that they don't lose their homes because they can't pay rent or mortgage fees. There's also no reason we should see punishing cuts in essential public services.

Unfortunately, it's looking increasingly likely that tens of millions of Americans will in fact suffer extreme hardship and that there will be devastating cuts in services. Why? The answer mainly boils down to two words: Mitch McConnell.

On Wednesday, McConnell, the Senate majority leader, declared that he is opposed to any further federal aid to beleaguered state and local governments, and suggested that states declare bankruptcy instead. Lest anyone accuse McConnell of being even slightly nonpartisan, his office distributed two memos referring to proposals for state aid as "blue state bailouts."

When I say that we have the resources to avoid severe financial hardship, I'm referring to the federal government, which can borrow vast sums very cheaply. In fact, the interest rate on inflation-protected bonds, which measure real borrowing costs, is minus 0.43 percent: Investors are basically paying the feds to hold their money.

So Washington can and should run big budget deficits in this time of need. State and local governments, however, can't, because almost all of them are required by law to run balanced budgets. Yet these governments, which are on the front line of dealing with the pandemic, are facing a combination of collapsing revenue and soaring expenses.

The obvious answer is federal aid. But McConnell wants states and cities to declare bankruptcy instead.

This is, as I said, stupid on multiple levels. For one thing, states don't even have the legal right to declare bankruptcy; even if they somehow managed all the same to default on their relatively small debts, it would do little to alleviate their financial distress — although it could cause a national financial crisis.

Oh, and the idea that this is specifically a blue state problem is ludicrous. Fiscal crises are looming all across America, from Florida to Kansas to Texas — hit especially hard by crashing oil prices — to, yes, McConnell's home state, Kentucky.

And if states and local governments are forced into sharp budget cuts, the effect will be to deepen the economic slump — which would be bad for Donald Trump and could cost Republicans the Senate.

So yes, McConnell's position is stupid. But it's also vile.

Think of who would be hurt if state and local governments are forced to make drastic cuts. A lot of state money goes to Medicaid, a program that should be expanding, not shrinking, as millions of Americans are losing their health insurance along with their jobs.

As for the state and local government workers who may be either losing their jobs or facing pay cuts, most are employed in education, policing, firefighting and highways. So if McConnell gets his way, America's de facto policy will be one of bailing out the owners of giant restaurant chains while firing schoolteachers and police officers.

Last but not least, let's talk about McConnell's hypocrisy, which like his stupidity comes on multiple levels.

At one level, it's really something to see a man who helped ram through a giant tax cut for corporations — which they mainly used to buy back their own stock — now pretend to be deeply concerned about borrowing money to help states facing a fiscal crisis that isn't their fault.

At another level, it's also really something to see McConnell, whose state is heavily subsidized by the federal government, give lectures on self-reliance to states like New York that pay much more in federal taxes than they get back.

We're not talking about small numbers here. According to estimates by the Rockefeller Institute, from 2015 to 2018 Kentucky — which pays relatively little in federal taxes, because it's fairly poor, but gets major benefits from programs like Medicare and Social Security — received net transfers from Washington averaging more than $33,000 per person. That was 18.6 percent of the state's G.D.P.

True, relatively rich states like New York, New Jersey and Connecticut probably should be helping out their poorer neighbors — but those neighbors don't then get the right to complain about "blue state bailouts" in the face of a national disaster.

Of course, McConnell has an agenda here: He's hoping to use the pandemic to force afflicted states to shrink their governments. We can only hope both that this shameless exploitation of tragedy fails and that McConnell and his allies pay a heavy political price.