Something to Know - 2 March (especially those from the Claremont Colleges)

— The only Republican running for the 34th Congressional District in Los Angeles has repeatedly tweeted that the novel coronavirus was "man made" and implicated Pope Francis, Hillary Clinton and others in the spread of the illness. The state Republican Party has denounced her comments.

The only Republican running for the 34th Congressional District in Los Angeles has repeatedly tweeted that the novel coronavirus was "man made" and implicated Pope Francis, Hillary Clinton and others in the spread of the illness.

"Bill Gates is one of the financiers of the Wujan (sic) lab where it was being developed," congressional candidate Joanne Wright wrote in a Feb. 24 tweet that has since been deleted. "I wouldn't put it past them and by 'them' I mean everyone from [Rep.] Adam Schiff to George Soros, Hillary Clinton and the Pope."

Wright's tweets appear to refer to a conspiracy theory that posits the coronavirus was created in a laboratory in Wuhan, China, where the COVID-19 outbreak was first reported.

Well, look at that. The Chinese Communist Party's propaganda rag finally admits what I've said for a month: coronavirus didn't start in Wuhan food market. So where did it originate? Time for answers from CCP. https://www.globaltimes.cn/content/1180429.shtml …

The California Republican Party has denounced Wright's comments. "These views are not representative of the @CAGOP regarding this serious public health issue," the organization tweeted Saturday.

In addition to incumbent Jimmy Gomez, Wright is running against three Democratic candidates who are vying for the seat that represents swaths of central, east and northeast L.A.

Wright, a real estate broker and vocal supporter of President Trump, did not respond to a request for comment.

As recently as September, Wright has tweeted from her personal Twitter account the slogan for QAnon, a far-right conspiracy theory that centers on a supposed secret plot by an alleged "deep state" against Trump and his supporters.

Wright posted a video in May titled "QANON THE GREAT AWAKENING" that promoted the conspiracy theory.

YouTube ‎@YouTube
The California GOP has endorsed Wright by default because she is the lone Republican running in that district, according to Cynthia Bryant, executive director of the California Republican Party. Bryant said the organization plans to review the rule that gives automatic endorsements to GOP candidates if they're the sole Republican on the ballot.

"There's a little thing called the 1st Amendment," Bryant said of Wright's tweet. "Candidates can say whatever they want to."

So much coronavirus-related misinformation has proliferated in recent weeks that the World Health Organization coined a term for the flurry of unsubstantiated claims: "infodemic."

U.S. Sen. Tom Cotton (R–Ark.) questioned the origins of the coronavirus on Fox News in mid-February, noting that a large laboratory is "a few miles away" from a seafood market that had a large cluster of some of the first cases detected.

"We don't have evidence that this disease originated there but because of China's duplicity and dishonesty from the beginning, we need to at least ask the question to see what the evidence says," Cotton said.

A group of 27 prominent public health scientists condemned the coronavirus conspiracy theories in a statement, saying that several scientists have concluded that the virus originated in wildlife.

"The rapid, open, and transparent sharing of data on this outbreak is now being threatened by rumors and misinformation around its origins," the scientists wrote.

As of Sunday, 40 cases of COVID-19 have been reported in California. 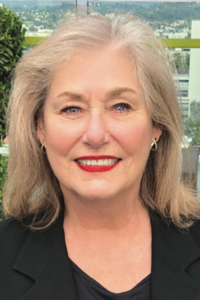 Joanne Wright (Republican Party) is running for election to the U.S. House to represent California's 34th Congressional District. She is on the ballot in the primary election on March 3, 2020.

Joanne Wright was born in Los Angeles, California. She earned a bachelor's degree from Scripps College and a master's degree in education from Claremont Graduate University. Wright's career experience includes working as a real estate broker and a teacher.[1]