Something to Know - 14 February (no, this is not a valentine card from Putin)

Trump and Barr Are Out of Control

The prosecutor who quit over the Roger Stone sentencing is sending a powerful message about political weaponization.

Mr. Bauer was a White House counsel in the Obama administration. 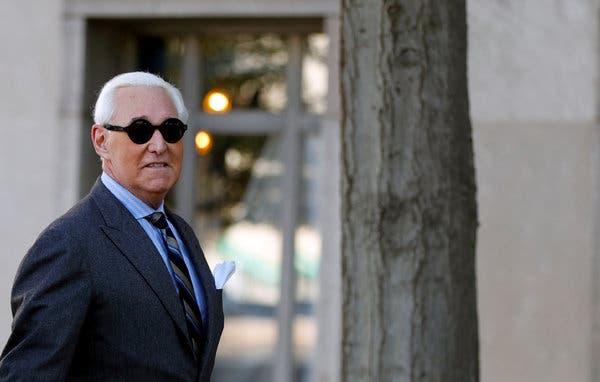 The resignation of a Justice Department prosecutor over the sentencing of Roger Stone is a major event. The prosecutor, Jonathan Kravis, apparently concluded that he could not, in good conscience, remain in his post if the department leadership appeared to buckle under White House pressure to abandon a sentencing recommendation in the case of Mr. Stone, the associate of President Trump who was convicted of obstructing a congressional inquiry into Russian meddling in the 2016 election.

Three of his colleagues quit the Stone case but remain with the department: Mr. Kravis left altogether. Even though the president for years has derided federal law enforcement officials, accusing them variously of conflicts of interest and criminality and weakness in not pursuing prosecution of his political opposition, Mr. Kravis's is the first resignation in the face of these assaults.

Dramatically forceful responses to Mr. Trump's assaults on rule-of-law norms have been all too rare. A resignation can set off an alarm bell for an institution whose failings an official might be unable to bring to light in no other way, or as effectively. It upholds rule of law norms in the very act of signaling that they are failing. It makes its point with power and transparency, and stands a chance of rallying support from those who remain in place and compelling other institutions like the press and Congress to take close notice.The government official who resigns for these reasons is, paradoxically, doing his or her job by leaving it.xx

Why did the Stone matter so clearly warrant resignation? The president has used Twitter to denounce and pressure department officials, senior administration lawyers and the Mueller team. When he did that to Attorney General Jeff Sessions, his deputy attorney general, Rod Rosenstein, and the special counsel Robert Mueller, they stuck it out. They must have thought that the best way to serve the rule of law was to hold off or humor the president, maintaining regular order as much as possible even as Mr. Trump raged that he could not fully control his department.

And there is a case to make for their choice. Mr. Sessions stood up to the president and adhered to his decision to recuse himself from the Russia investigation. Mr. Mueller was not fired and completed his investigation in the Russia matter.

But this time, the president got what he wanted. Mr. Trump attacked the department sentencing recommendation as an unacceptable "miscarriage of justice" that was "horrible and unfair." And then the department did switch positions on the sentencing, criticizing its own prosecutors for failing to be "reasonable" in their recommendation to the court.

This, then, could be seen as the extreme case, whereas normally a lawyer might decide that "working from the inside" is the best, most responsible answer to the president's behavior.

Still, if resignation had been seen earlier as viable, even necessary option, it's possible that we would not have arrived at this point. Mr. Sessions could have resigned over the president's public calls for him to ignore his recusal requirements or prosecute Hillary Clinton. If Mr. Mueller had resigned over the president's attacks on him and refusal to sit for an interview, he might not have completed his report but he would have rendered a devastating and unequivocal judgment. And, without a report he felt compelled to rely on, Mr. Mueller might have felt himself more at liberty to testify in detail to Congress.

Resignation, while an act of professional conscience, can be effective in pushing back against violations of norms of impartial, professional law enforcement insulated from political pressure. According to the Mueller report, having been finally pushed too far, the White House counsel Don McGahn threatened to resign in June 2017 over Mr. Trump's directive to fire Mr. Mueller. What did the president do? He backed down.

That was then. Mr. Trump has established a new normal at the senior legal leadership of his administration. The rhetoric of Mr. Sessions's successor, William Barr, suggests that he accepts, to a disturbing degree, the president's desire for a politically responsive Justice Department. Mr. McGahn's successor, Pat Cipollone, defended the president in the impeachment proceeding with arguments of the kind, in tone and variance from the factual record, you would expect to hear from Trump surrogates on Fox News.

We can't know if a wave of resignations early in this administration would have made a difference in preventing or tempering the unfortunate appearance, and perhaps increasing reality, that the administration of justice is being politicized. During the Watergate scandal, the Saturday Night Massacre resignations by Justice Department leaders certainly made an impression on President Richard Nixon, who then appointed an effective independent prosecutor, Leon Jaworski.

Resignations can be a shock to the system, just what is needed to clarify the issues, force Congress to pay attention and alter a president's behavior.

What government lawyers are prepared to accept, the conditions under which they are willing to work, still matters. Institutions can be severely damaged in one huge blow or whittled away.

Of course, resignation as an act of protest is not a choice to be lightly made by those who join an administration and find themselves in disagreement with the president. It is not justified by policy decisions that a subordinate official would have made differently.

But the president should not be able to command this loyalty when the conflict concerns something as fundamental as the professionalism and independence of the Justice Department — and involves a case in which the president has a direct personal interest and the defendant is a political associate.

For senior administration lawyers to just manage these kinds of conflict — ignoring Mr. Trump's tweets and disregarding his inappropriate if not unlawful presidential orders — allows the abnormal to become normal and professional standards to crumble.

The prosecutor who resigns rather than remain in a decaying institution is upholding crucial norms. To his credit, at least one lawyer has chosen to do this, even if it is the rare case and it may have come too late to protect the Department of Justice from Mr. Trump's demands and Attorney General Barr's apparent willingness to accommodate them.

Bob Bauer, a professor of practice and distinguished scholar in residence at New York University School of Law, was a White House counsel in the Obama administration.

--
--
****
Juan
Freedom's just another word for nothing left to lose.
- Kris Kristofferson
Posted by 1ma2t