Sharpie's chief of staff (MIck Mulvaney) throws out insults as he attempts to make us believe that he did not say what he previously said.  He would just have us believe that he and Donnie can just throw their swampy crap under the rug and that we should just get over it.
https://www.nytimes.com/2019/10/20/opinion/trump-impeachment-united-states.html?nl=todaysheadlines&emc=edit_th_191021?campaign_id=2&instance_id=13240&segment_id=18083&user_id=af58c63b30a52a2ca05d6e1633e35b95&regi_id=23180491021

We dare not fail this test of our constitutional government. 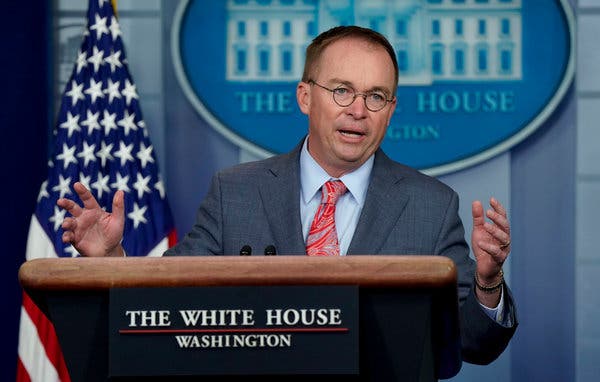 Acting White House Chief of Staff Mick Mulvaney.CreditCreditLeigh Vogel for The New York Times
For weeks Donald Trump and his defenders have insisted that his decision to hold up aid to Ukraine was not dependent on that nation investigating Trump's political opponents in the United States. They all insisted that there was no quid pro quo.
But, last week the acting White House chief of staff, Mick Mulvaney, lifted the veil on that lie, confirming during a televised briefing that there was indeed a quid pro quo. As The New York Times reported, "Mr. Mulvaney told journalists … that the aid was withheld in part until Ukraine investigated an unsubstantiated theory that Ukraine, not Russia, was responsible for hacking Democratic Party emails in 2016 — a theory that would show that Mr. Trump was elected without Russian help."
Since making this shocking statement, Mulvaney has been struggling to clean it up, to tell the world that he didn't say what he clearly said.
And, in the moment of making the statement, Mulvaney proudly proclaimed: "I have news for everybody: Get over it. There's going to be political influence in foreign policy."


No, Trump world, we are not just going to get over it, not now or ever.
Trump's strategy is simple: Be brazen. Conduct your corruption in plain sight. And, it follows a simple logic: If it were wrong, I would be ashamed of it and attempt to conceal it. The fact that I haven't attempted to shroud it is proof of its virtue.
That is what's maddening about the Trump presidency: how much harm has been done as America looked on, with full awareness of the damage, and Trump has yet to be held accountable for any of it.
But that time is drawing to an end.
Wrong is wrong, whether you parade it or put it away. In fact, it is the flaunting of wrongdoing that should carry more of a penalty, not less of one. We can't allow our numbness to make this normal. It isn't.
This impeachment inquiry is the best thing Congress has done to help the country in years. Some worry that an impeachment would tear the country apart. To the contrary, I believe that it will bring the country together. A majority of Americans will recognize and rally around a common set of facts, a common truth, and reject Trump's attempt to bend reality.
A Pew Research Poll released last week found that 58 percent of Americans, including a quarter of Republicans, believe that Trump has done things that are grounds for impeachment.


No matter how much he says that the call he made to the president of Ukraine was perfect, no matter how much he attacks the whistle-blower, no matter how much he lies, most Americans see through it and are appalled by it.
And now that Mulvaney has made the disastrous mistake of actually telling the truth, some Republicans are even signaling that they are open to at least entertaining a vote to impeach the president.
This is another step that is important to the repairing of the country. It's not that I believe that the Senate would be in any danger of actually voting to convict and remove Trump. It's that we need to know that at least some of these Republican men and women who make our laws are not totally craven and devoid of morality.
And, Republicans and independents need to know that holding Trump accountable is not a sour grapes pursuit to relitigate 2016, or born out of maddening personal hatred of the man himself.
This is far bigger than all that. Trump is a stress test on our system and constitutional government and we dare not fail. Trump must be held accountable not only because his corruption dictates it, but also because we must demonstrate that accountability is possible.
If Americans chose to just "get over it" as Mulvaney demanded, the power of the president to degrade, corrupt and evade the system would be enshrined. Trumpism would  mar the future.
That can't happen. Trump wrongdoing in the Ukraine case is clear. (I would argue that it's clear in other areas as well.)

Republican Congressman Francis Rooney of Florida made it clear that he's not ruling out the possibility of supporting impeachment. Sunday on CNN he told Jake Tapper that Mulvaney's attempt to walk back his admission was a farce, saying: "I don't see how you walk back something that's clear. I would say game, set, match on that."
And, as The Washington Post reported:
"Rooney told reporters Friday when asked about the political consequences of potentially impeaching Trump that he wanted 'to get the facts and do the right thing because I'll be looking at my children a lot longer than I'm looking to anybody in this building.' "
Each of us will have to look at our children, to look at ourselves in the mirror and be held accountable for how we responded to the threat Trump poses.
As the late Elijah Cummings put it:
"When we're dancing with the angels, the question will be asked: In 2019, what did we do to make sure we kept our democracy intact?"
--
****
Juan
Freedom's just another word for nothing left to lose.
- Kris Kristofferson
Posted by 1ma2t