Something to Know - 30 April 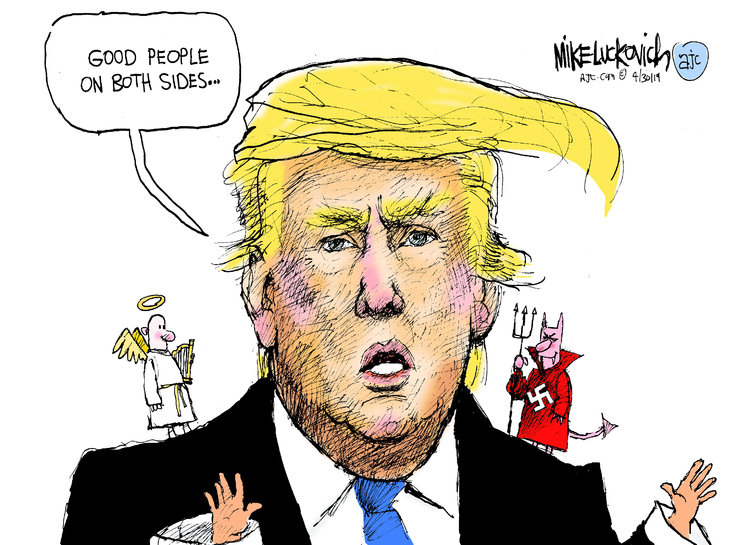 All candidates aside, one of the biggest issues that would capture attention is the fact that there are some big corporations that do not pay one one DIME in taxes, and even get a rebate.  At the same time, small mom-and-pops and average small businesses pay a great deal.   This does not compute well to all-but-the very wealthy, and Individual #1's tax program is guilty as hell.   If you have access to the NY Times, this article has all the bells and whistles of graphics to show.  If not, just the text is enough to command your interest:
https://www.nytimes.com/2019/04/29/us/politics/democrats-taxes-2020.html?emc=edit_th_190430&nl=todaysheadlines&nlid=23180490430

AKRON, Ohio — Colin Robertson wonders why he pays federal taxes on the $18,000 a year he makes cleaning carpets, while the tech giant Amazon got a tax rebate.

His concerns about a tilted economic playing field recently led Mr. Robertson to join the Akron chapter of the Democratic Socialists of America. At a gathering this month, as members discussed Karl Marx and corporate greed over chocolate chip cookies, it wasn't long before talk turned to income inequality and how the government helps the wealthy avoid taxes.

"One of the benefits of taxation is taking it and using it for the collective good," said Mr. Robertson, 25, comparing his minimal income to the roughly $150 billion net worth of Jeff Bezos, Amazon's chief executive and the world's richest person.

"He could be taxed at 99.9 percent and still have millions left over," Mr. Robertson said, "and I'd be homeless."

It's a topic that several presidential candidates, led by Senators Bernie Sanders and Elizabeth Warren, have hammered recently as they travel the campaign trail, spurred by a report that 60 Fortune 500 companies paid no federal taxes on $79 billion in corporate income last year. Amazon, which is reported to be opening a center in an abandoned Akron mall that will employ 500 people, has become the poster child for corporate tax avoidance; last year it had an effective tax rate of below zero — receiving a rebate — on income of $10.8 billion.

For decades, profitable companies have been able to avoid corporate taxes. But the list of those paying zero roughly doubled last year as a result of provisions in President Trump's 2017 tax bill that expanded corporate tax breaks and reduced the tax rate on corporate income.

"Amazon, Netflix and dozens of major corporations, as a result of Trump's tax bill, pay nothing in federal taxes," Mr. Sanders said this month during a Fox News town hall-style event. "I think that's a disgrace."

Corporations' ability to whittle down their tax bills has long been a target of criticism by Democrats, and this presidential campaign is no exception, particularly among left-wing candidates who argue that corporations should be accountable for wage inequality and its impact on low- and middle-income workers.

Though both parties have sought to lower the top corporate tax rate in the last decade — President Barack Obama proposed lowering it from 35 percent to 28 percent — Republicans in 2017 pushed it down to 21 percent, in addition to expanding some generous tax breaks. The new law allowed immediate expensing of capital expenditures, for example, in order to goose investment. That was one of the primary reasons that more corporations paid no federal taxes, according to the report.

Mr. Trump and his Republican allies argued that the tax changes would stimulate investment and economic growth. That has happened, though not by as much as they predicted.

Here in Ohio, even though unemployment has hit an 18-year low, several counties still have jobless rates significantly higher than the national rate, 3.8 percent, and the statewide rate, 4.4 percent. Ohioans have witnessed so many factory closures over the years that they seem to live with a permanent sense of economic wariness. The question for Democrats is how to leverage that to their advantage as they try to retake the state, which Mr. Trump won by 8 percentage points in 2016.

David Betras, the Democratic chairman in Mahoning County, a traditionally blue stronghold of union voters that President Trump nearly carried in 2016, said that Democrats had not yet figured out how to use the economic angst of laid-off employees and minimum-wage workers to defeat Mr. Trump in Ohio in 2020.

"Believe it or not, if you listen to the president, he addresses that issue," Mr. Betras said. "He does it with a lot of smoke and very many mirrors, but he's at least talking about how good the economy is and what I've done for you. 'I'm with you. I have your back.'"

Even as candidates focus on corporate taxation, Mr. Betras said the issue didn't resonate with voters in the same way as more familiar topics like health care or immigration. (Mr. Betras, a lawyer, has endorsed Representative Tim Ryan of Ohio for the Democratic nomination.)

A Gallup poll last fall suggested that taxes were generally a more important issue for Republicans than for Democrats.

In an election in which Democrats will seek to win back voters who supported Mr. Obama in 2008 and 2012, then switched to Mr. Trump, some worry that calls to increase corporate taxes might turn off swing voters in this critical state, those like Thomas Chhay, a student at the University of Akron.

"I lean Republican," Mr. Chhay, 18, said recently while having lunch at the university's student union. "I agree with corporate tax cuts unless the companies ship the jobs overseas."

The list of profitable companies that pay no corporate taxes, compiled by the Institute on Taxation and Economic Policy, a left-leaning think tank, also includes Goodyear and three other Ohio companies, including the Akron-based electric utility FirstEnergy.

FirstEnergy paid no taxes last year on $1.5 billion in income, according to the analysis, and will receive additional tax credits that can be used in the future. In a win for consumers, some of that will be returned to the utility's customers

Several of the Democratic candidates have called for changes to the corporate system, and Ms. Warren has gone the furthest in issuing a detailed plan. Under her proposal, corporations would pay a new 7 percent tax on every dollar over $100 million in profits they earn anywhere in the world. She estimated the new tax would apply to roughly 1,200 companies and bring in $1 trillion over 10 years.

Under Ms. Warren's plan, Amazon would have paid $698 million instead of $0 in federal taxes for 2018. In a statement, the company said it "pays all the taxes we are required to pay in the U.S. and every country where we operate." (In a separate statement, Netflix said that it did, indeed, pay federal taxes in 2018.)

Mr. Sanders, in his 2016 presidential campaign and in this one, has routinely talked about closing loopholes and capturing some of the billions in profits that multinationals have kept overseas in tax havens.

Amy Klobuchar, the Minnesota senator who is also running, has taken a different approach. She has tied a proposed increase in the corporate tax rate, to 25 percent from the current 21 percent, to plans to rebuild bridges, roads and airports. About $400 billion of her trillion-dollar infrastructure plan would be financed by the tax increase.

Former Vice President Joseph R. Biden Jr., who officially entered the race on Thursday, has not issued a formal proposal on corporate taxes. In remarks last May, however, he blamed a "yawning" income gap for tearing the country apart. "We have to deal with this tax code," he said. "It's wildly skewed toward taking care of those at the very top."

In surveys, more Americans support raising the corporate tax rate than lowering it or leaving it unchanged. And several Democratic candidates, like the former housing secretary Julián Castro, invoke "fair share" rhetoric in speeches or vow to undo the recent Republican tax law. Others, like Senator Kamala Harris of California, have focused more on the individual income tax and reducing the burden on working families.

But raising the headline tax rate on corporations won't eliminate the corporate zero-rate club, which also results from companies taking advantage of loopholes and the way global profits are taxed.

Two years ago, Mr. Trump appeared at a rally in working-class Youngstown, the seat of Mahoning County, and delivered a messagefull of economic reassurance.

In Ohio, it has not entirely worked out that way.

General Motors, one of the companies on the zero-tax list, recently idled a large plant near Youngstown that produced the Chevrolet Cruze, a decision that helped increase the company's stock price even as G.M. paid no federal taxes on $4.32 billion in income.

"What was promised to these people was more jobs," said David Green, president of United Auto Workers Local 1112, which represents workers at the plant, which is in Lordstown. "When you give them the tax break and they take the jobs away, that's like a double whammy. That's a lose-lose."

Lordstown is in Trumbull County, where the unemployment rate was 6.6 percent in March and many of those who work are eligible for public assistance.

Tyler Savin, a real estate agent, said the idling of the plant had added to his home listings and that many sellers wouldn't get their asking prices as they left Ohio for other G.M. locations.

Mr. Savin, 22, was among the customers recently at Tommy Dogg's Bar and Grill in nearby Niles, the birthplace of both Mr. Ryan, the local favorite-son candidate, and William McKinley, a Republican president who was known for imposing tariffs on foreign goods.

Mr. Savin likes Mr. Sanders, Mr. Biden and former Representative Beto O'Rourke of Texas, but will ultimately vote for whoever the Democratic nominee is, he said in a whisper lest pro-Trump patrons overhear.

"I think corporations should pay their taxes, like Amazon," he said. But he said health care and support for abortion rights were more important to him.

Jeff Williams, 57, who manages a convenience store on the midnight shift, had heard about Amazon's tax breaks on the radio. As he sat outside his home in Niles, he also was doing some comparison.

He was treated for cancer, heart disease and two hernias last year but wasn't able to deduct his expenses, he said. Amazon, meantime, availed itself of a full suite of tax breaks. "Amazon doesn't pay taxes, but I pay taxes," Mr. Williams said.

Akron, about an hour west, is faring better economically. Mayor Daniel Horrigan won't confirm or deny it, but Amazon is believed to be the company he has recruited to move into the old Rolling Acres Mall, which closed in 2008. Amazon would not comment on whether it planned to open a facility there.

Mr. Horrigan has been working to invigorate the economy of Akron, historically known as the Rubber City for its role in tire manufacturing. The tire jobs have mostly moved elsewhere.

Goodyear, which made the list of 60 by paying no federal corporate income taxes, employs 64,000 people worldwide, but only 3,000 of them remain here, mostly in the company's headquarters. A spokesman said the company's 2018 tax situation stemmed from "historical losses in U.S. operations."

The Democratic Socialists have close to 100 members in Akron, many of them supporters of Mr. Sanders. Those attending this month's meeting ranged from a stay-at-home mother who said she hadn't been able to pay her water bill for a year to a college professor, David Pereplyotchik.

Mr. Pereplyotchik, 37, said he believed the group should come up with a viable alternative to the American corporate tax and wage system.

"If we're fighting for something, what version of the thing are we fighting for?" asked Mr. Pereplyotchik, who teaches philosophy. "It seems like if you just make them pay employees more, they're just not going to hire employees."