Something to Know - 20 April 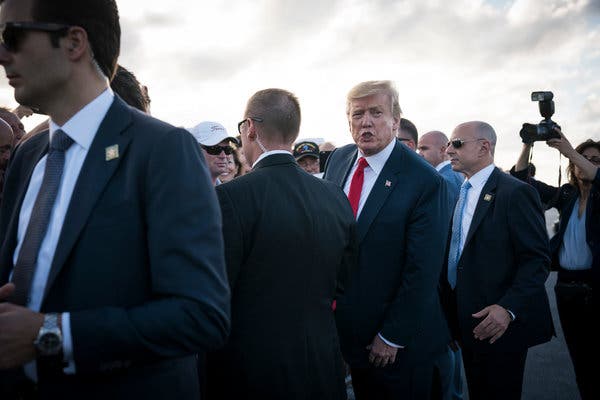 President Trump in Florida, hours after the release of the Mueller report.CreditCreditSarah Silbiger/The New York Times

In a Functional Country, We Would Be on the Road to Impeachment

Mueller laid out the evidence for members of Congress to take action against President Trump. Will they?

In 2017, a brilliant visual effects expert created a video montage called "It's Mueller Time! Trump Administration Season Ending." Set to the crooning of the 1963 song "From Russia With Love," it shows F.B.I. agents rounding up the central figures who brought us Donald Trump's presidency, culminating in Trump himself being led away with his hands behind his back.

I'll admit to having watched this over and over again; it's one of the most satisfying bits of wish fulfillment I've ever seen. Wish fulfillment is all it was, though. It's a national disgrace that Trump sleeps in the White House instead of a federal prison cell, but it has been a while since I had any expectation that the special counsel Robert Mueller's findings, many of which were finally released to the public on Thursday, could set things right. Instead, I'd desperately hoped for something more modest: clarity. A rough public consensus on what happened in the 2016 election and its aftermath, akin to the Warren Commission report on the assassination of President John Kennedy, or the 9/11 Commission Report. A set of facts that serious people could agree on, leaving conspiracy theories at least somewhat marginalized.

There are a lot of reasons Trump's election remains a festering wound. It was a horrifying shock to many of us and, given his decisive loss in the popular vote, an insult to democracy. But there was also so much destabilizing weirdness surrounding it. Trump's relationship with President Vladimir Putin of Russia has long been suspect; as Kevin McCarthy, the California Republican who was the House majority leader at the time, told colleagues in a secretly recorded 2016 conversation, "There's two people I think Putin pays: Rohrabacher and Trump." (He was speaking of Dana Rohrabacher, the slavishly pro-Putin former Republican congressman.)

Several weeks before Trump was inaugurated, America's intelligence agencies reported that Russia had engaged in cyberoperations to help him win. In the months that followed, there was one staggering revelation after another about secret conversations between Trump's circle and various figures linked to Russian intelligence.

At the same time, the new administration unleashed on the public a degrading cacophony of lies, of the sort many of us associate with authoritarian countries like Russia. The day after the new president was sworn in, Sean Spicer, Trump's first press secretary, stood in the White House briefing room and insisted that the inauguration crowd had been unprecedented in size. This was terrifying, despite the petty stupidity of the untruth, because Americans were not yet used to being told to believe government diktats over the clear evidence of their senses.

This quickly became our new normal. Once Republicans realized the power they could amass by collaborating in Trumpian mendacity, most of them gleefully abandoned any sense of epistemological solidarity with their fellow Americans. There's a reason "gaslighting" has become one of the most overused terms of the Trump era. And perhaps the biggest lie of all was that Mueller's investigation, rather than the events that precipitated it, was the real scandal, an attempt to frame Trump rather than an effort to get to the bottom of an assault on our democracy.

It was probably naïve to think that Mueller could cut through such a thick web of falsity. But if anyone could have, it would have been him, the embodiment of a set of old-fashioned virtues that still ostensibly command bipartisan respect. Over the months of the investigation, he came to represent for many an ideal of manliness that rebuked Trump's insecure machismo. He was a war hero, Trump was a shirker. He was a public servant, Trump a venal con man. He was honest, Trump a liar. America doesn't have a Walter Cronkite anymore, a person whose word is trusted implicitly across the political spectrum. Mueller was as close as we were going to get.

He and his team have now given us the clearest picture yet of the murky events surrounding Trump's ascension. "The Russian government interfered in the 2016 presidential election in sweeping and systematic fashion," they wrote. The Trump campaign welcomed this interference, but, we now know, did not assist in it. "Although the investigation established that the Russian government perceived it would benefit from a Trump presidency and worked to secure that outcome, and that the Campaign expected it would benefit electorally from information stolen and released through Russian efforts, the investigation did not establish that members of the Trump campaign conspired or coordinated with the Russian government in its election interference activities."

Once in office, Trump sought to thwart the investigation into what Russia had done. He believed — correctly, as it happens — that Russia's actions cast doubt on the legitimacy of his victory. The report says he may also have feared that what appears to be his advance notice of the WikiLeaks dumps of hacked Democratic emails and his campaign's now infamous Trump Tower meeting with Russian emissaries offering dirt on Hillary Clinton "could be seen as criminal activity by the President, his campaign, or his family." Further, although "the President publicly stated during and after the election that he had no connection to Russia," his company was negotiating to build a Trump Tower Moscow throughout most of the campaign, a fact that could have hurt him politically if it got out.

Numerous commentators have said that the report reads like a road map for impeachment, and in a remotely functional country that's what it would be. Mueller makes it clear that because of the Office of Legal Counsel's opinion that a sitting president cannot be indicted, "we determined not to apply an approach that could potentially result in a judgment that the President committed crimes." Instead, the evidence is laid out for congressional action, or even for prosecutors to indict after Trump leaves office.

The test for us now is how much evidence still matters. Before the report came out, William Barr, Trump's attorney general, created a fog of disinformation around it, blatantly misleading the public about what it contained.

Weeks before anyone else could read the report, he tried to close the door on obstruction, implying falsely that Mueller meant to leave the decision to him. In a news conference on Thursday, Barr repeatedly said that Mueller had found no "collusion" between the Trump campaign and Russia. Mueller, however, never examined the case through the lens of "collusion," which isn't a term in criminal law: "In evaluating whether evidence about collective action of multiple individuals constituted a crime, we applied the framework of conspiracy law, not the concept of 'collusion,'" the report says. Barr claimed that "evidence of non-corrupt motives weighs heavily against any allegation that the President had a corrupt intent to obstruct the investigation." The report is overstuffed with evidence of corrupt motives.

But most people aren't going to read the nearly 500-page report. Republicans have already seized on Barr's words — and on the lack of criminal charges in a document that was never going to contain criminal charges — to claim total vindication for Trump. The president's manifest disloyalty to the country in trying to halt an investigation into a foreign attack on an American election is, to the right, of no account. Nor are the counterintelligence implications of Mueller's findings, which aren't part of the report. In the eyes of the president's supporters, his campaign did not participate in the criminal conspiracy that helped elect him, so no more needs to be said.

The reaction to the report shows that between the minority of Americans who support Trump and the majority who do not, there may no longer be even the possibility of a shared sense of reality or national purpose. Even as exemplary a figure as Mueller cannot change that.

Compounding the problem, Republicans are willing to act unilaterally on their perception of reality, but Democrats are not. As Hannah Arendt wrote in 1951, "Totalitarianism will not be satisfied to assert, in the face of contrary facts, that unemployment does not exist; it will abolish unemployment benefits as part of its propaganda." The same logic underlies Republican threats to actualize fantasies about an attempted deep-state coup by opening an investigation into the Mueller investigation's origins.

Most Democrats, conversely, have facts on their side, but not conviction. They are reluctant to begin an impeachment inquiry into Trump because majorities, in polls, don't support it, and there is no Republican buy-in. Whether or not this is politically wise, failing to impeach would be a grave abdication. If you want people to believe that the misdeeds enumerated in the Mueller report are serious, you have to act like it. To not even try to impeach Trump is to collaborate in the Trumpian fiction that he has done nothing impeachable.

On Friday, Senator Elizabeth Warren took the lead among Democratic presidential candidates in calling for impeachment proceedings to begin. Others should follow her. Mueller has given us the truth of what Trump has done, and in that sense the hokey faith the Resistance put in him was not misplaced. But right now only a political fight can make that truth matter.