Something to Know - 25 February 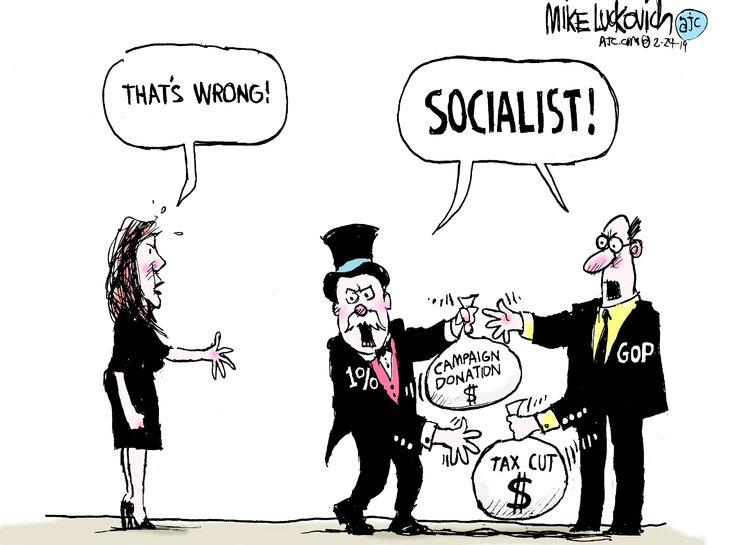 BREXIT.   The showdown for the Brits is due at the end of the if this month, and it looks like it got extended a couple of weeks.  What a MESS.  It is a situation worth looking at, since it could be really messy, and become a historical catastrophe for the folks who were involved in the creation of our nation.   Just look at it as a collision of kusterbumbling ideologies which never figured out what they were doing in the first place and went ahead and did it anyway.

Britain in the Crazed Brexit Vortex

The land of milk and honey promised by the Vote Leave campaign in 2016 has turned into a nightmare.

It has come down to this with a few weeks to go until the March 29 deadline for Britain to leave the European Union, as it voted to do almost three years ago: a jumble of jargon, jousting and gibberish, with everyone sucked into the vortex of confusion, to the exclusion of every other issue in the world. Britain's biggest political parties are splintering, and there is clarity only on the fact that nobody has a clue what is about to happen.

So much for the panacea offered in 2016 by leaders of the Vote Leave campaign — a land of milk and honey in which an island liberated from European shackles would become "Global Britain," money would flow, impetigo would be cured, children would become more beautiful, the soil more bountiful, and the world Britain's oyster. These days, the fantasy has sagged into a mumbled, "Well, Brexit is not the end of the world."

Not quite. "Leaving and going somewhere are not the same thing," Sam Gyimah, a Conservative politician who quit the government of Prime Minister Theresa May late last year in protest at her proposed accord with the 27-nation European Union, told me. "Nobody agrees on where we should go."

May's deal, overwhelmingly rejected by Parliament last month, is a fudge. It leaves the nature of Britain's future relationship with the European Union to be decided over the next two years. Everything — the fate of the customs union, of the single market, of the Ireland-United Kingdom border — remains unresolved under this proposal that May is now scrambling to rescue.

Article 7 of May's proposed agreement — call it the disempowerment clause — says that after March 29, European Union law "shall be understood as including the United Kingdom" except as regards "the participation in the decision making and governance of the bodies, offices and agencies of the Union." In other words, things remain as they are except that Britain loses "its voice, its vote and its veto," in Gyimah's phrase, as it embarks retrospectively on negotiating what its on-time exit from the union actually means.

"It would be the greatest voluntary transfer of sovereignty in memory," Pat McFadden, a Labour M.P. opposed to Brexit, told me.

So much for the "Take Back Control" slogan Brexiteers wielded in 2016 to foist every frustration of voters onto Brussels. In fact, the best the Tory government could come up with over negotiations consuming the entire political energy (and untold treasure) of this country is a kick-the-can measure designed to avert the calamity of a no-deal Brexit.

This, absent an accord or deferral, would involve Britain crashing out of the union on March 29 into a void. Bring it on! So say the hard-line Tories in May's party, their appetite for destruction not yet sated. Many of them are members of the European Research Group, an entity whose anodyne name masks its pro-Brexit zeal. It has apparently never heard of a multinational supply chain.

Honda's recent decision to close a plant in Swindon with the loss of 3,500 jobs — unrelated, it says, to Brexit (ha-ha) — and Nissan's recent retrenchment are signs, along with slower growth and lower investment, of the price Britain has already paid for uncertainty. No-deal Brexit would turn uncertainty into mayhem.

So May maneuvers to save her deal, chiefly by adjusting the "backstop," an insurance policy to preserve an open border in Ireland that has enraged hard-line Brexiteers because they see it as a Trojan horse for keeping Britain in the customs union through all eternity.

Jeremy Corbyn, the feckless Labour leader, maneuvers to keep his fingerprint off the British exit he not-so-secretly favors, while the majority of his party wants to remain in the European Union and eight M.P.s quit to form an independent group in Parliament to protest his policies.

Yvette Cooper, a leading Labour politician, pushes a bill to defer the March 29 deadline; and two other Labour M.P.s, Peter Kyle and Phil Wilson, have drawn up an amendment that would see the House of Commons approve May's accord on condition that it is put to a second referendum. (As for the Malthouse Compromise and forms of a soft or free-trade Brexit modeled on Norwegian or Canadian ties to the union, consign them, dear reader, to the vast T.M.I. Brexit archive).

The bottom line is simple: Brexit has been, is and will be a disaster for Britain. The 2016 vote was manipulated through lies. A country that has benefited from its 46-year participation in a union of more than a half-billion Europeans is drifting toward a self-amputation understood by few, opposed by the young, abetted by a dissembling anti-American Labour leader, driven by little-England Tory right-wingers holding the country for ransom, and, according to polls, no longer wanted by the majority.

Here are the odds in descending order of likelihood: An adjusted May accord secures parliamentary approval; the March 29 deadline is extended; no deal; a second referendum. Fight on! The best option, now that the country has sobered up, is to put Britain's real future to a second people's vote