Something to Know - 17 December 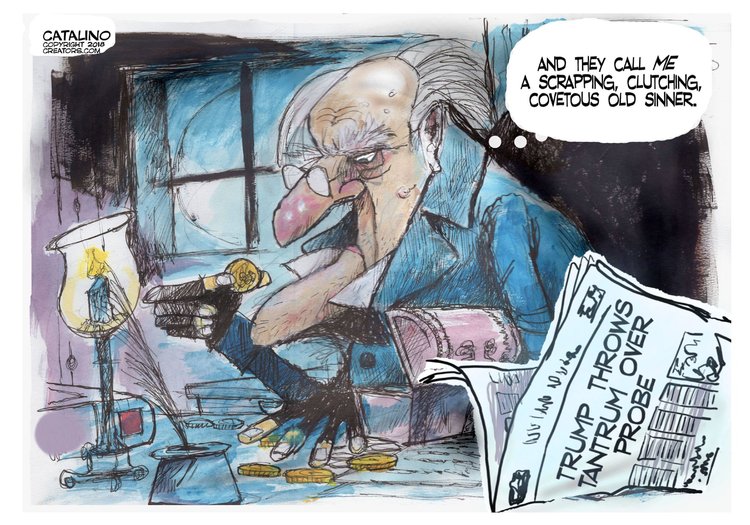 Morning Joe reminded us this morning that Individual #1 really had no intention of winning.  It was all a branding exercise to plush up his real estate resumé and hotel holdings, so that he might profit mightily and biggly.  The fact that he won is an inconvenience to him, and a disaster for the nation.  Now, as all facets of his businesses, the political campaign, his finances, and of course the collusion play out, in the end we all suffer the game of fools.   The disgrace he carries with him is an insult all around.   Just the act of getting on his big plane and going to the areas known as war zones to visit those who he has put in harms way is beyond this guy.   For the next several weeks, we will be going to the Amazon River on a nice boat with several friends to visit a real swamp loaded with critters, piranhas, and alligators - not the GeeOpie two-legged kind- returning on 9 January.   Be well.

Put Down the Golf Clubs, Visit the Troops

President Trump, the commander in chief, should not look away from the wars he oversees.

By The Editorial Board

The editorial board represents the opinions of the board, its editor and the publisher. It is separate from the newsroom and the Op-Ed section.

President Trump is happy to send the military to the border as a political prop before the midterm elections, to order up a grand parade down Pennsylvania Avenue for his review and to berate athletes who kneelduring the national anthem as disrespectful of the military.

But visiting the troops that he has ordered to the front lines in places like Iraq, Afghanistan and Syria has been a bridge too far for this commander in chief.

"I'm going to a war zone," Mr. Trump told reporters in November, when pressed about his conspicuous lack of war zone visits.

So far, he's all talk and no boots on the ground.

The president is expected to spend 16 days at his home in Palm Beach, Fla., over the Christmas and New Year's holidays — his longest trip to the "Southern White House" since the inauguration in 2017. The weather there is expected to be a sunny 75 degrees. Perfect for a few rounds of golf, or more than a few.

Temps in Kabul, Afghanistan, during the same period are forecast to be in the mid-40s. There, more than 8,000 soldiers from the United States and more than three dozen allied countries are fighting against a resurgent Taliban after 17 years of war. Little wonder that the mission and the morale of those charged with achieving it are both being seriously questioned.

The forecast is rosier for the border with Mexico, where several thousandsoldiers will have to spend the holidays away from their families, having been deployed there in a pre-election ploy by the president to rile up anti-immigrant sentiment.

He probably won't have to worry about rain, which was the excuse given by the White House for his decision not to visit an American military cemetery in France while he was in Paris last month to commemorate the end of World War I.

There have been numerous and conflicting explanations for why Mr. Trump has avoided visiting troops downrange — he doesn't agree with all the conflicts and doesn't want to be associated with them, he's too busy, he's scared for his safety. Never mind that nearly every president since Dwight Eisenhower has safely visited soldiers in conflict zones from Vietnam and Korea to Iraq and Afghanistan. Barack Obama, for one, visited Iraq as a senator in 2008 and returned within his first three months in the White House. He went to Afghanistan four times.

What Mr. Trump's excuses all reveal, however, is a basic misunderstanding. Visiting soldiers and sailors and Marines in the field isn't about the president. It is about the troops. It's about those who are close to the enemy and far from home, following orders and serving a cause greater than themselves.

A visit from the president isn't just about raising morale and smiling for a few photos, though that can mean more to a young grunt than most civilians may realize. Americans want a president who isn't afraid to look at and reflect upon the consequences of his decisions. It's why presidents visit wounded soldiers at Walter Reed National Medical Center and why they lay wreaths at Arlington National Cemetery, as Mr. Trump did this weekend.

"I'm here on behalf of your commander in chief and all of the American people to pay a debt of honor and respect and gratitude to each and every one of you for your service and your sacrifice," Vice President Mike Pence told soldiers and airmen at Bagram Airfield in Afghanistan during a surprise visit in late December last year.

This holiday, it would be heartening to see the president himself deliver the same sentiment to America's troops on the front lines, in his own words.