Something to Know - 5 October 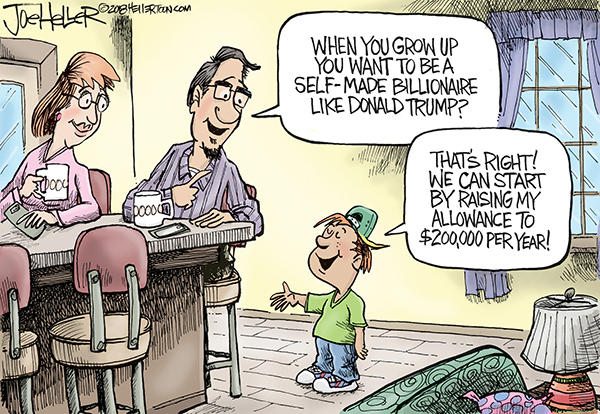 The news roller coaster at this moment is in bleak nadir (Nay, dear.....it don't look good).  On the other hand, this little ditty that started out with the NY Times, and now it's here in the New Yorker for your reading.  This puts trumpy in ego nadir. if there is such a term, which there probably isn't.   News that shows the Donald to be nothing more than a "self-made sham" pisses him off.  He and his family may be liable for hundreds of million dollars in back taxes and penalties, and possible charges of tax evasion.  Take heart; the news is not all depressing:
https://www.newyorker.com/news/swamp-chronicles/how-the-states-could-force-trump-to-liquidate-parts-of-his-business-empire?mbid=nl_Daily%20100518&CNDID=24467358&utm_source=Silverpop&utm_medium=email&utm_campaign=Daily%20100518&utm_content=&spMailingID=14380696&spUserID=MTMzMTgyNTAwOTU5S0&spJobID=1500413903&spReportId=MTUwMDQxMzkwMwS2

Sean Shaw, the Democratic candidate for state attorney general in Florida, has a message for Donald Trump. If elected, Shaw will investigate the President's financial activities across the Sunshine State. "We'll pursue any area that is worthy of pursuit," Shaw told me in an interview this week. "The charity not being charitable. Trump Mar-a-Lago and emoluments." Shaw told me he would go "where the law takes me." He plans to investigate whether "the President of the United States is personally profiting from the Presidency in Florida."

Trump, of course, has several properties in Florida, including Mar-a-Lago, a private club that doubled its initiation fee after Trump was elected. Since Trump took office, three of its members have exerted sweeping influence on the Department of Veterans Affairs. Another member was named the U.S. Ambassador to the Dominican Republic. Shaw also said that he will investigate reports that a Trump-branded development project in Sunny Isles, Florida, bears hallmarks of possible money laundering. Shaw made clear that his investigations would be broad and open-ended: "They may lead you to tax returns, financial records. I don't know where they lead. No one is above the law in Florida. No one. We are going to make it such that if I find bad stuff going on, we're going to go where it takes us, no matter how big."

One recent poll put Shaw just behind his Republican opponent, Ashley Moody, who has expressed support for President Trump. Even if Shaw loses, Trump may be vulnerable in several other states where he has done business. In New York, the Democratic candidate for attorney general, Letitia James, is all but assured a victory. James is promising Democratic voters that she will aggressively investigate the President. After this week's stunning Timesinvestigation alleged that the Trump Organization's wealth was built, in large part, on a variety of complex tax schemes, many of which could be illegal, she issued a statement:

There must be a full examination of these claims. I welcome the New York State Department of Taxation and Finance's inquiry, and call on every agency with jurisdiction‚ from the Internal Revenue Service to the New York Attorney General's Office—to follow the facts wherever they may lead. No stone should be left unturned. Donald Trump's days of defrauding Americans are coming to an end.

The current New York attorney general, Barbara Underwood, has already launched an investigation into the Trump family foundation that has revealed questionable accounting practices. The Mayor of New York City similarly promised to pursue any taxes the President may owe.

In New Jersey, where Trump owns several businesses, the Democratic attorney general, Gurbir Grewal, told Politico in May that he would investigate Trump and, "if there's any indication of any criminal activity, or anything like that, we'll use the powers at our disposal to investigate. We have a lot of tools at our disposal."

California's Democratic attorney general, Xavier Becerra, has already filed dozens of lawsuits against the Trump Administration and has made clear that he sees himself as a part of the anti-Trump resistance. (Becerra did not respond to requests for comment.) And if Democrats win a majority in the U.S. House of Representatives, they will be able to direct investigations—and issue subpoenas—focussed on a host of potential federal crimes. The House cannot force the Department of Justice to investigate, of course, but congressional investigations can be effective at swaying public opinion and creating political pressure.

Since the appointment of the special counsel, Robert Mueller, President Trump's legal team and many Republicans in Congress have employed a "red line" strategy, arguing that Mueller's investigation should not delve into the Trump Organization's business conduct and should focus solely on the Trump campaign's possible collusion with the Russian government. The red-line strategy appears designed to focus Congress and the nation on a narrow question: Did President Trump knowingly collude with the Russian government to sway the 2016 election, and, if so, should he be impeached? Mueller's investigation has so far revealed much illegal activity by high-ranking members of the Trump campaign, but no final answer regarding collusion. Many in Trump's orbit have expressed confidence that there will be no definitive proof that could justify impeachment and removal from office. In seeking to keep the legal, political, and public discussions focussed on whether Trump colluded, the President's team likely hopes to reach a post-investigation phase of Trump's Presidency.

That no longer seems possible. There will be no post-investigation phase of this Presidency; there will be no narrow conversation limited to collusion. Rather, new Trump Presidency battlegrounds will open as attorneys general in several states examine nearly every aspect of the President's business practices and finances. President Trump has done business in New York, New Jersey, Connecticut, Florida, Virginia, Washington, D.C., California, Arizona, and several other states. Nearly all of his companies are registered in Delaware. The Times investigation suggests he may owe taxes in all of these states and others, so attorneys general may investigate whether his tax schemes affected the amount he owes.

Perhaps the single most striking fact in the Times investigation is that even now, after so many investigations over so many years, there is much to learn about the Trump family's business operations. Since the investigation focussed on Fred Trump's papers, its information ends long before Donald Trump sought the Presidency. In 2019, with investigations occurring in New York and, potentially, several other states, it seems all but certain that we will learn more about how Trump made and spent money over the past decade. With every new disclosure so far, Trump's business practices have been revealed to be even sloppier and more unethical and possibly illegal than I and others who have investigated Trump's finances imagined.

Next year, Charles (Chip) Irby, Jr., may become famous. Irby is expected to be released after serving several years in federal prison. His obscure criminal case could be a flashpoint in American politics. Irby, from Laurel, Mississippi, was a stockbroker who viewed taxation as unconstitutional. He used a complex set of shell companies to hide his income so that he could avoid paying taxes. He was indicted in 2011, found guilty, and sentenced to prison. Soon after, he filed an appeal, arguing that his conviction was illegal because the taxes he owed were due in 2001. The statute of limitations for tax fraud is six years. The U.S. Court of Appeals for the Fifth Circuit ruled against Irby, "because we hold that the statute of limitations accrues from the last evasive act." In other words, the clock on the statute of limitations would only start when he ceased all evasive activity.

It now seems that a previously obscure ruling about how long after an alleged crime a person can be indicted for tax fraud could become central to a new set of legal issues that will cloud the Trump Administration, roil Republicans against Democrats, and test the Constitution. What happens when a state attorney general investigates and potentially seeks to indict a sitting U.S. President? Whatever the legal battles, of course, the likelihood of Trump's removal from office seems remote. Republicans are likely to maintain their majority in the Senate and continue to embrace Trump enthusiastically. The likelihood that a sitting President or an immediate ex-President will be arrested by a state is remote.

Trump, though, has made clear throughout his life that his core goal is not political power; it is money. Or, more accurately, creating the public perception that he has a great amount of it. The Times investigation revealed that his wealth has been far more dependent on his father's largesse and potential fraud than on Trump's own business savvy. But 2019 could bring far worse news for Trump. Crain's has reported that, based on the Times investigation, Trump and his siblings could owe four hundred millions dollars in taxes, interest, and penalties in New York State alone. His exposure to comparable tax bills at the federal level and in several other states could force the liquidation of parts of his family fortune. For Trump, the fear of losing money could be more terrifying than the fear of losing his office. He should be afraid.