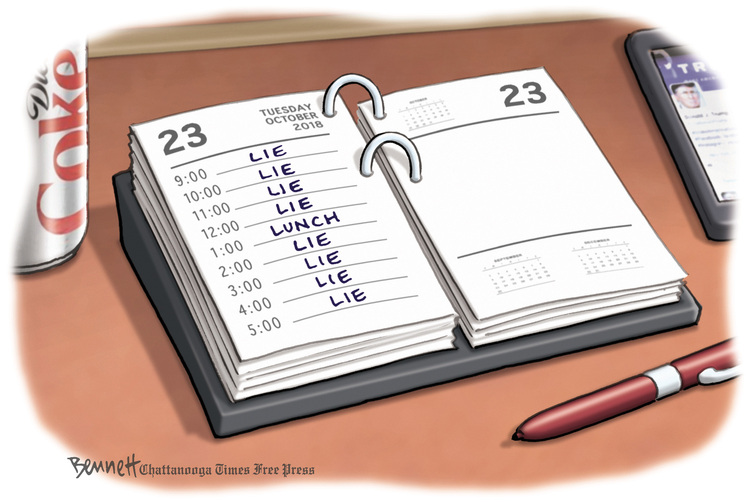 I'm back on the regular news cycle after a 12-part attempt to bring great journalism to you from the Atlantic.  Here's today's NY Times editorial about our out-of-control leader.   The shame this guy has brought to the office of President of the United States is beyond normal conversation.   It is too bad that the opposition does not have the power, the stage, nor the messenger to counter each and every lie that vomits out of the collection of biomass under that spiff of fraudulent follicle suggestions.

There he goes again.

With Republicans struggling to keep their grip on Congress, President Trump is dialing up the demagogy. At campaign rallies and on social media, he's spewing dark warnings about a Democratic mob clamoring to usher in an era of open borders, rampant crime, social chaos and economic radicalism.

As is so often the case, Mr. Trump is not letting reality interfere with his performance. At a rally in Nevada this weekend, the president told the crowd that Californians were rioting to "get out of their sanctuary cities." (They aren't.) He also suggested that Democrats will soon be looking to hand out free luxury cars to illegal immigrants. (They won't.) "Give 'em a driver's license. Next thing you know, they'll want to buy 'em a car," he riffed. "Then they'll say the car's not good enough, we want — how about a Rolls-Royce?"

Mr. Trump's Twitter feed has been electrifying as well, full of statements intended to thrill his fans — and, better still, bait his opponents into a partisan rage. In recent days, he has dubbed Stormy Daniels "Horseface," escalated his taunting of Senator Elizabeth Warren as "Pocahontas" and grumbled about the fact that Bruce Ohr, one of Mr. Trump's nemeses in the "rigged" Russian "witch hunt," is still employed by the Department of Justice. He has asserted that the Democratic nominee for governor in Florida, Andrew Gillum, is looking to turn the state into "the next Venezuela." He has threatened to dispatch troops to shut down the southern border and renewed his vow to cut off the "massive foreign aid" sent to El Salvador, Guatemala and Honduras for those nations' failure to stop their people from flocking to the United States.

In particular, the caravan of Honduran migrants making its way north has emerged as a focus of his fantasies. Mr. Trump has repeatedly implied that Democrats are paying Honduran youth to join the caravan. On Monday, he claimed, based on nothing, that the caravan is awash in "criminals and unknown Middle Easterners."

On Sunday, news broke of yet another move by the Trump administration to assault L.G.B.T. rights. According to a draft memo leaked to The Times, the Department of Health and Human Services is leading the charge to establish a legal definition of "sex" based strictly on "immutable biological traits identifiable by or before birth," eliminating the category of transgender individuals in the eyes of the federal government. In cases when a person's birth sex was in dispute, genetic testing would be used to settle the matter.

Such a shift has been in discussion among administration officials for more than a year, and the memo in question has been floating around since the spring. Health and Human Services is expected to present its official case to the Department of Justice by year's end. Yet, like Mr. Trump's prior reversals of Obama-era policies that expanded transgender rights, the news understandably sent a ripple of fear and anguish through the community of 1.4 million transgender Americans, their loved ones and anyone who cares about civil rights.

Mr. Trump plays the polarization game because he enjoys it — he does love a brawl — and because he doesn't appear to care about much beyond his political and personal fortunes. And, more practically speaking, these days he doesn't have much else to talk about.

It's not that this president has failed to achieve anything in his first couple of years in office. The economy is chugging along right now, and many Republican candidates would be happy for him to play that up on the campaign trail.

But his most notable achievements do not resonate beyond Mr. Trump's base. He has overseen a conservative overhaul of the federal judiciary, seating a record number of judges, including two Supreme Court justices. And he has been an aggressive deregulator in areas ranging from education to transportation to health care to the environment.

Meanwhile, the Republicans' much-ballyhooed tax cut hasn't proved especially popular. The party failed to repeal and replace Obamacare, as it had been promising for seven years. The president's big talk about infrastructure investment has devolved into a bad political joke. His tariffs and trade war talk are giving even members of his own team migraines. And that's without even getting into all the foreign policy drama.

It is notable if not surprising that two of the widely popular policy issues Mr. Trump has been talking up — his commitment to protecting health care coverage for people with pre-existing conditions and his promise to put forward "a very major tax cut" for middle-income people in the next few weeks — have no basis in reality. This administration has specifically declined to defend pre-existing conditions against pending legal challenges. And with Congress out of session until after the elections, there can be no serious movement on tax policy until the lame-duck session.

Thus, as Mr. Trump moves to make the case for Republicans in the midterms, he has few options beyond revving up his base. Which might be motivating — possibly even energizing — for some die-hard partisans on both sides of the battle. But it is more than a little dispiriting for the millions of Americans already exhausted by seemingly endless outrage. And it is really bad for the country.
--
****
Juan
"Patriotism is supporting your country all the time, and your government when it deserves it."
- Mark Twain
Posted by 1ma2t