Something to Know - 10 September 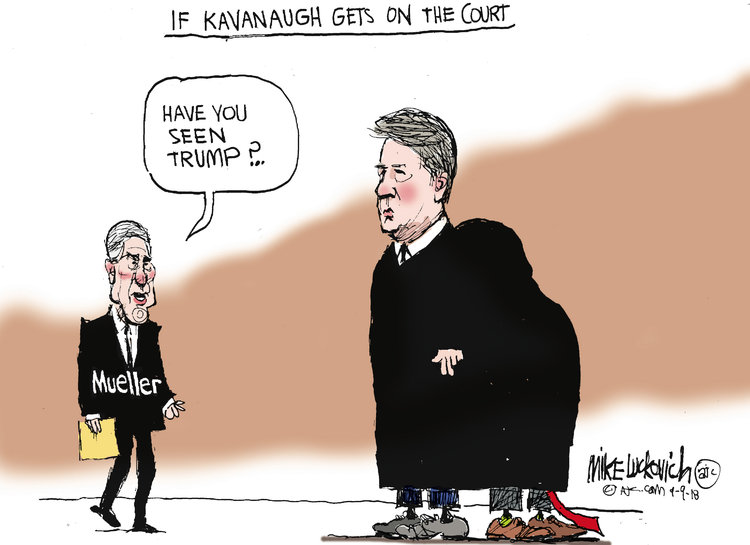 Last night I watched a re-run of the 2013 film "All the Presidents Men Revisited".  Watching the Robert Redford documentary of Watergate is always a riveting experience.  Reliving the scandal and corruption of Nixon and his downfall should be required material for all high school graduates.  Just like the series of documentaries concerning the Holocaust, we need to periodically revisit the dark periods of history to realize the depths of corruption, cruelty and inhumanity so that future generations understand how evil and corrupt governments fail us.   One of the memorable lines of Watergate is Deep Throat (Mark Felt), who advises Woodward and Bernstein to "follow the money".   That instruction applies to this story from today's NY Times:
https://www.nytimes.com/2018/09/09/opinion/trump-money-laundering-russia-mueller.html?emc=edit_th_180910&nl=todaysheadlines&nlid=23180490910

Donald Trump has a long history of doing what he thinks is best for Donald Trump. If he needs to discard friends, allies or wives along the way, so be it. "I'm a greedy person," he has explained.

It's important to keep this trait in mind when trying to make sense of the Russia story. Trump's affinity for Russia, after all, is causing problems for him. It has created tensions with his own staff and his Republican allies in Congress. Most voters now believe he has something to hide. And the constant talk of Russia on television clearly enrages Trump.

He could make his life easier if only he treated Vladimir Putin the way he treats most people who cause problems — and cast Putin aside. Yet Trump can't bring himself to do so.

This odd refusal is arguably the biggest reason to believe that Putin really does have leverage over Trump. Maybe it's something shocking, like a sex tape or evidence of campaign collusion by Trump himself. Or maybe it's the scandal that's been staring us in the face all along: Illicit financial dealings — money laundering — between Trump's business and Russia.

The latest reason to be suspicious is Trump's attacks on a formerly obscure Justice Department official named Bruce Ohr. Trump has repeatedly criticized Ohr and called for him to be fired. Ohr's sin is that he appears to have been marginally involved in inquiries into Trump's Russian links. But Ohr fits a larger pattern. In his highly respected three-decade career in law enforcement, he has specialized in going after Russian organized crime.

It just so happens that most of the once-obscure bureaucrats whom Trump has tried to discredit also are experts in some combination of Russia, organized crime and money laundering.

It's true of Andrew McCabe (the former deputy F.B.I. director whose firing Trump successfully lobbied for), Andrew Weissmann (the only official working for Robert Mueller whom Trump singles out publicly) and others. They are all Trump bogeymen — and all among "the Kremlin's biggest adversaries in the U.S. government," as Natasha Bertrand wrote in The Atlantic. Trump, she explained, seems to be trying to rid the government of experts in Russian organized crime.

I realize that this evidence is only circumstantial and well short of proof. But it's one of many suspicious patterns about Trump and Russia. When you look at them together, it's hard to come away thinking that the most likely explanation is coincidence.

"Russians make up a pretty disproportionate cross-section of a lot of our assets," Donald Trump Jr. said a decade ago. "We have all the funding we need out of Russia," Eric Trump reportedly said in 2013. And what was the rare major bank to work with Trump? Deutsche Bank, which has a history of illegal Russian money laundering.

Trump also had a habit of selling real estate to Russians in all-cash deals. Money launderers like such deals, because they can turn illegally earned cash into a legitimate asset, usually at an inflated price that rewards the seller for the risk. One especially dubious deal was Trump's $95 million sale of a Palm Beach house to a Russian magnate in 2008 — during the housing bust, only four years after Trump had bought the house for $41 million.

Then there is Trump's paranoia about scrutiny of his businesses. He has refused to release his tax returns. He said that Mueller's investigation would cross a red line by looking into his finances. When word leaked (incorrectly) that Mueller had subpoenaed Deutsche Bank's records on Trump, he moved to fire Mueller (only to be dissuaded by aides). Trump is certainly acting as if his business history contains damaging information.

For months, Adam Schiff, the top Democrat on the House Intelligence Committee, has been trying to get Congress to pay attention to the possibility of money laundering. He points out that Mueller's mandate does not necessarily include a full investigation of Trump's businesses. But those businesses could still have behaved in ways that give Putin, a hostile foreign leader, leverage over the president of the United States.

Which means that the November elections may determine whether we ever get answers. If Democrats win House control, Schiff will gain subpoena power. If Republicans keep control, just imagine how emboldened Trump will feel. He could mount a full-on assault on the rule of law by shutting down Mueller's investigation and any other official scrutiny of the Trump Organization.

At this point, who can doubt that Trump wants to do so? Presumably, he has a good reason.

"I fell in love with my country when I was a prisoner in someone else's."- John McCain