Something to Know - 9 June 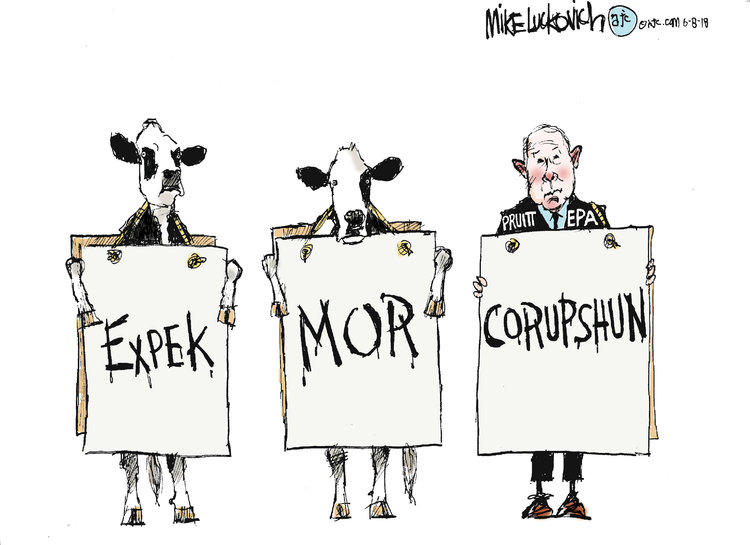 I almost overlooked this one from a couple of days ago, and it needs to be shared with you.  It's been a while since Krugman has appeared here, but he is not to be forgotten.   In this  column, he is pointing out that what we have along 45th's Street, which used to be known as 1600 Pennsylvania Avenue, is not a Swamp, but a Sewer:
Opinion 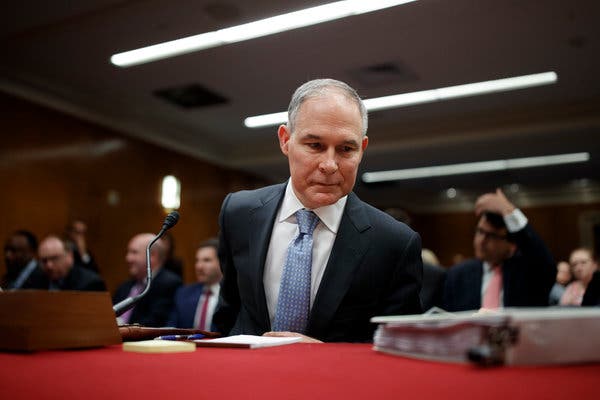 Of course Donald Trump is corrupt. Everyone with any sense knew he would be, although the scale of his personal profiteering, the strong likelihood that his family's financial interests have distorted U.S. foreign and national security policy, have startled even the cynics. And, of course, the example set by the grifter in chief has infected his whole administration.

But what's really striking to me is not so much the extent of corruption among Trump officials as its pettiness. And that pettiness itself tells you a lot about the kind of people now running America.

Corrupt cabinet members used to look like Albert Fall, Warren Harding's secretary of the interior, who was at the center of the Teapot Dome scandal. Fall used his office to secure sweetheart leasing deals for two oil companies, and in return received more than $400,000 in bribes — well over $5 million in today's prices.

That's the kind of corruption you can understand and sort of respect.

Corrupt Trump officials, by contrast, look like Tom Price, who managed to lose his job as secretary of health and human services by taking too many private planes at public expense; Ryan Zinke, who holds Fall's old job at Interior and has a problem similar to Price's but with helicopters and a general habit of using public funds to pay for private travel; Ben Carson of Housing and Urban Development, with his $31,000 dining set; and Steve Mnuchin, the Treasury secretary, who likes taking military jets, sometimes on what appear to be private vacations.

And then there's the prince of perks: Scott Pruitt, head of the Environmental Protection Agency, whose list of petty grifts includes everything from customized fountain pens, to telling an aide to procure a used mattress, to an attempt to use his office to secure a Chick-fil-A franchise for his wife.

One thing that immediately strikes me about these stories is that all these officials are failing the marshmallow test — the famous if controversial psychological experiment in which children are told they can get two marshmallows if they can wait a few minutes before eating the one in front of them.

Think about it: If you're a cabinet official willing to do the bidding of special interests — to let corporations make profits off public land, to let polluters poison the air and water — a couple of years of circumspect behavior will set you up for an extremely lucrative future career as a lobbyist. Consider how weak your self-control must be if you're willing to put this huge payoff at risk for the sake of a used mattress.

But the downward arc of corruption from Teapot Dome to Chick-fil-A isn't just telling you about Trump officials' immaturity; it's also a window into the emptiness of their souls.

Long ago Tom Wolfe wrote a memorable essay on what really drivesmany powerful men. It's not so much a taste for the finer things; the truth is that private planes aren't all that comfortable, and my guess is that most of the people who drink $400 bottles of wine couldn't tell the difference if you served them a $20 bottle instead.

It is, instead, the pleasure of "seeing 'em jump" — of watching people abase themselves, jump through hoops, to cater to your whims. It's about making yourself feel bigger by getting other people to act small.

Doesn't this explain everything Pruitt does? The absurdity of his demands is a feature, not a bug: I have doubts about whether he ever uses that $43,000 soundproof phone booth, but he surely took pleasure in making his staff jump to provide it.

Why is the Trump administration full of small-time grifters? Clearly, they take their cues from their boss, who famously enjoys sycophancy and demeaning his subordinates, up to and including top officials. Indeed, I suspect that many of his officials are engaged in what I once saw described as "bicycling": bowing to the man above while trampling on those below.

And it has been striking how supportive Trump has been of officials like Pruitt caught out in petty abuses of their position, despite the bad press. Clearly, he sees nothing wrong in what they're doing; it's what he would do, and in fact does himself.

So as I said, we're being governed by men with small and empty souls. Does it matter?

In a direct sense, not really. There's a good case that Trump's own profiteering is doing huge damage, but the small ways in which his officials have been ripping off taxpayers are trivial compared with the big things they're doing to make America worse: undermining health care, environmental protection, financial regulation, and more.

In a deeper sense, however, petty corruption and cruel, destructive policy are indeed linked. Men who see high office largely as a license to live large, act like big shots and force government employees to act as their personal servants aren't likely to care much about serving the public interest.

We don't need a government of saints; people can be imperfect (who isn't?) yet still do good. But a government consisting almost entirely of bad people — which is what we now have — is, in fact, going to govern badly.

****
Juan
I've often been asked, 'What do you old folks do now that you're retired?' Well…I'm fortunate to have a chemical engineering background and one of the things I enjoy most is converting beer, wine and vodka into urine. I do it every day and I really enjoy it.
- Anonymous