Something to Know - 5 June 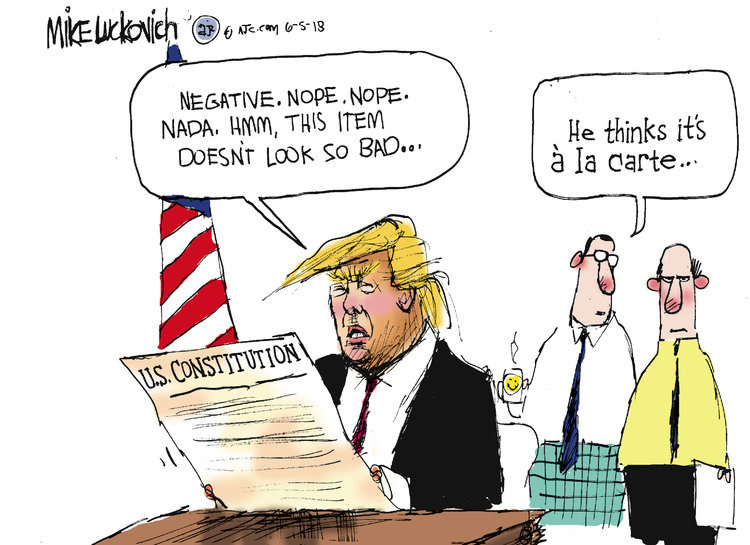 Many of you know of my disgust with Big Pharma as it continues on its voyage of reflecting the capitalist underbelly of our nation's health care system.  This article from today Los Angeles Times and its author David Lazarus does not shake loose any new corruption or lapses of morality.  It is just another story to add to the pile of stories just so that we do not forget, but might be inspired to act to take steps to regulate the industry with a vengeance.

The myriad problems with the U.S. healthcare system aren't the fault of any one person. But every so often, an industry executive spouts something so wrong-headed, it shines a helpful light on what we're up against.

Heather Bresch, chief executive of the drug company Mylan, maker of EpiPens, stepped into it Monday in a CNN podcast.

After about 40 minutes of benign, getting-to-know-you questions, interviewer Poppy Harlow finally got around to asking about the lingering stink that surrounds Bresch having jacked up the price of life-saving EpiPens by more than 400%.

Mylan didn't invent the devices. It bought the rights to sell them in 2007.

Bresch tap danced a little, talking about how the price hike was justified because of a brand-awareness campaign and a package redesign. She then slid past her money-grubbing behavior and focused instead on her company's sensitive and caring response to public outrage.

After hearing that people were angry about Mylan raising the price of a two-pack of EpiPens from about $100 to more than $600, Bresch said Mylan didn't hesitate to bring out a generic version of the EpiPen that sold for just $300.

The public "needed a solution and wanted a solution," she said. "And so before we did anything else, before I testified in Congress, before I did anything, we came to the market with a generic and cut the price in half."

This is bogus on many levels.

First off, the outrage had been building for months, especially among families who relied on EpiPens to keep children with severe allergies alive. Momentum picked up after Bloomberg ran a story on the price increases in September 2015.

He's the guy who shamelessly raised the price of a six-decade-old anti-infection drug called Daraprim from $13.50 to $750 a pill.

Shkreli became the poster boy for industry avarice in February 2016 when he refused to testify in Congress, invoking his 5th Amendment right against self-incrimination and smirking all the while at frustrated lawmakers.

In August of that year, members of Congress started asking Mylan about the more than 400% markup of EpiPens.

It was at this point that Bresch announced an "authorized generic" EpiPen — that is, manufactured by the same company that makes the name-brand version for twice the price.

When it was released to the public in December 2016, Bresch patted herself on the back for taking "decisive action" and "unprecedented action" to help American families.

I asked Mylan if it cared to comment on Bresch's version of events. No one got back to me.

Be that as it may, let's just think about that "lower-cost" alternative, shall we?

If you're catching hell for more than quintupling the price of a drug for which you did no research to create, do you really get points for merely tripling the price? I don't think so.

Moreover, Mylan was profitably selling EpiPens in Canada and Europe for a fraction of the U.S. price.

Again, the company had done no R&D. All it did was purchase the rights to the device.

Yet Monday's CNN podcast gave Bresch plenty of room to define herself as a strong, damn-the-torpedoes corporate leader, the kind of person who won't hesitate to do what's right.

She described the EpiPen scandal as "a defining moment" that left her a better person.

"There is no question it strengthened me," Bresch said. "Things happen for a reason."

What reason is that? Unfettered corporate greed?

No. Bresch painted herself as a victim of a broken system.

"I wasn't going to be apologetic for operating in the system that existed," she said. "What I decided to do was put my effort and energy to … talk about what needed to be fixed."

Bresch added that she hopes she can be part of the solution as President Trump seeks to fulfill repeated pledges to reduce drug prices, although he hasn't announced a single meaningful move.

As for her sky-high increase in pay as she was gouging patients, she said people should be happy that a woman in the drug industry was making as much as the guys. #YouGoGirl.

I'd love to say that CNN called Bresch on all this nonsense, but it didn't. It gave her an hour's worth of podcast time to sing her own praises and rewrite history.

Harlow wound things up by saying, "Finish this sentence for me: 'I will have succeeded when ...'"

Bresch didn't hesitate. "I will have succeeded when I have done everything I can possibly do to impact how healthcare is delivered."

Last August, Mylan finalized a $465-million settlement with the U.S. Justice Department to resolve claims it overcharged the government for EpiPens by misclassifying them as a generic rather than a branded product. This resulted in the company making smaller rebates to state Medicaid programs.

"Mylan misclassified its brand name drug, EpiPen, to profit at the expense of the Medicaid program," acting U.S. Atty. William D. Weinreb said at the time. "Taxpayers rightly expect companies like Mylan that receive payments from taxpayer-funded programs to scrupulously follow the rules."

The company admitted no wrongdoing.

Things happen for a reason.