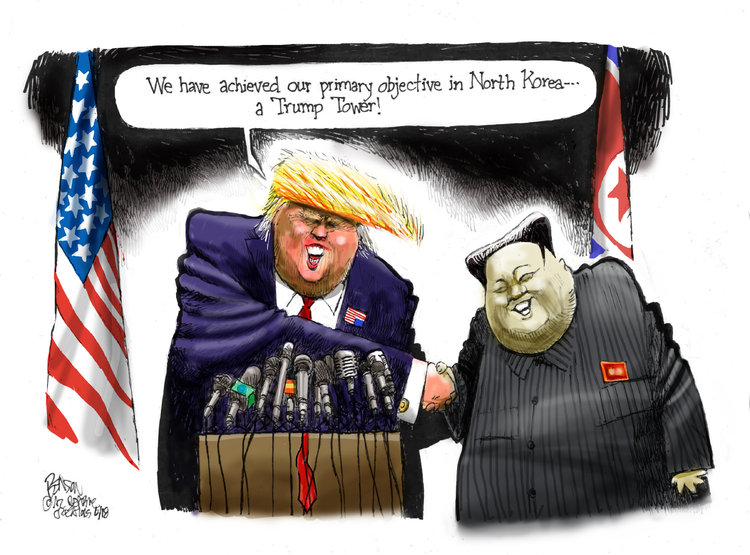 A good thing happened yesterday in Singapore.  The good is that two antagonistic characters sat down and seemed to agree that nukes are not good and it is a good idea to get rid of them.   Festering over half a century and more, the meeting is momentous.  However, the cynicism in me wonders if the 45th did this to get the mounting pressure from Mueller off of his back.  In a press conference after the two met, Trump mentioned that he discussed condos and vacation spots in N. Korea.   Okay, we will see where this all goes when the diplomats work out the details.   Make no mistake, there is a fragile and non-defined positive sign that did not exist before.  However,  to get to Singapore, our dear leader trashed our allies and broke decades of alliances with this tempestuous tantrum in Toronto, and that does bother me greatly today.  It bothers me that we bullied and denigrated our friends and neighbors and created chaos and hostility just to set a stage where he could dominate the discussion in Singapore.  Stay tuned for the fallout of a different nature:

By The Editorial Board

The editorial board represents the opinions of the board, its editor and the publisher. It is separate from the newsroom and the Op-Ed section.

When Vladimir Putin ordered his hackers to surreptitiously help Donald Trump in the presidential race, he could hardly have anticipated that once in office, Mr. Trump would so outrageously, destructively and thoroughly alienate America's closest neighbors and allies as he did at the Group of 7meeting in Canada. The lame explanation from Mr. Trump's courtiers, that he needed to look tough for his meeting with Kim Jong-un, made matters worse by implying that he felt he needed to publicly kick friends aside to impress a murderous dictator.

Nations represented at the meeting — and especially Canada, whose prime minister, Justin Trudeau, was personally insulted in a way defying basic social norms — reacted with horror and dismay. International diplomacy cannot be conducted by "fits of anger," said President Emmanuel Macron of France, who Mr. Trump only recently embraced in Washington. "In a matter of seconds, you can destroy trust with 280 Twitter characters," said the German foreign minister, Heiko Maas. Editorials were less restrained: "When roused, we don't roll over at the request of an insulting bully, no matter how big," hissed Canada's Globe and Mail.

Indeed, the Group of 7 was just the kind of forum a bully like Mr. Trump cannot abide, not out of geopolitical considerations, but because he cannot dominate and preen. He knew he would be on the defensive — over backing out of the Paris environment accord and the Iran nuclear deal, and now over the tariffs he slapped on European and Canadian steel and aluminum — so he made a point of being late, acting petulant, leaving early and lashing out at Mr. Trudeau.

That behavior, at a meeting intended to project a unified front on the major economic issues of the day, seemed to summarize all the damage and insults Mr. Trump has thrown at the community of democratic nations. The allies had been wary of Mr. Trump from the outset, given his aversion to international organizations and multilateral trade agreements, his conviction that the United States is being ripped off by its military allies and trade partners, and his impatience for the details of foreign affairs. But there was a lingering hope, most recently demonstrated by Mr. Macron's chummy state visit to Washington, that he would respond to old allies and grow into his office.

But no. Instead, as photographs from the Quebec resort showed, Mr. Trump faced the other leaders with arms defiantly crossed and face locked in a pout. It was a confirmation that so long as Mr. Trump is in the White House, and maybe beyond that, something fundamental in the community of Western democracies will be missing. America, the leader of the free world and the architect of so much of the modern world order, had decided to go its own way.

For the six other Group of 7 nations, this must be a time of resolve and unity. For Americans, it's past time to recognize that this president has transformed "America First" into "America Alone," and that this is the last place a great and powerful nation wants to be.