Something to Know - 24 July

Without the benefit of an open-to-the-public session this week, we will not have a TV show, and a  sworn-to-oath  testimony by a Kushner, Manaforte, or Don Jr.  There is a new Director of Comms in the White House, who, to me, comes off like an informercial slick selling us underbelly sleaze like a patriotic sycophant.  This article from today's LA Times tries to get at the chaotic mind and tension in the oval office, and lays out a scenario that we should fear.   By the way, Lynne and I are going to Yorba Linda tomorrow to the "revised and relevant" Nixon Library.  In preparation for this, I viewed a recent "20/20" ABC TV program, which was very good because it had all of the film and digital videos of the actual characters in Watergate.   Is there is a connection between this article and the TV program? 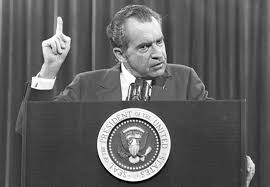 The president's dangerous endgame
By Paul W. Kahn
President Trump is besieged. He is reportedly looking for ways to close down the Russia investigation by the Justice Department. He already tried at least once, when he fired FBI Director James Comey. He still has the power to fire special counsel Robert S. Mueller.
President Nixon fired a special prosecutor, Archibald Cox. It did not go well for him, but he did it anyway. To fire Mueller, Trump probably first would have to fire Rod Rosenstein, the deputy attorney general. And to do that, he would have to finish what he's already loudly hinting at: ridding himself of Atty. Gen. Jeff Sessions. Nixon, too, had to eliminate his attorney general and his deputy attorney general before he could get rid of Cox. No doubt, Trump will push them out with all the glee that he used to show on "The Apprentice."
Next, the president will want to avoid the pressure that Nixon experienced to hire yet another special prosecutor. Trump reportedly is investigating pardons for all of those involved in his campaign's interactions with the Russians. A presidential pardon need not wait for indictment, let alone conviction. Trump will announce that, with the pardons, he is putting all these "endless, groundless attacks" behind him, clearing the way so he can address the problems the voters elected him to solve. The agenda was "to make America great again," not to waste time and energy defending against baseless charges brought by Democrats who cannot accept the results of the election.
With these two moves, the president will have substantially undermined the federal government's power of criminal accountability. What Trump cannot do, however, is shut down the congressional investigations. He controls the Justice Department, not the House or the Senate. In our system, when law ends, politics begins. The president is ultimately accountable to our elected representatives in Congress.
To avoid impeachment, Trump will have to invoke yet more powers of the presidency. Here, the nation's future looks dark. Trump can divert attention from impeachment to a national security crisis. As president, he has extraordinary power to deploy the military. He already has attacked Syria with no authorization from Congress. In this respect, too, we have a pretty good idea of what he might do: attack North Korea. It would have to involve more than the limited strikes against weapons facilities we saw in Syria, which didn't divert much attention for very long.
Is it really possible that Trump would put the lives of hundreds of thousands of Koreans in jeopardy for the sake of his own position? Would he risk a nuclear confrontation with China for personal reasons? To ask the question is to answer it. A man with no sympathetic imagination, a man whose narcissism knows no bounds, will be guided by only one thing: what is good for the Trump family. Of course, Hillary Clinton was right that such a person should never have control of the nuclear codes. Only willful blindness could keep even his supporters from acknowledging this now. We have no evidence whatsoever of the president exercising self-control. No evidence that he can separate the personal from the political. No evidence that he cares about innocent people abroad.
Is this endgame unavoidable? Surely no one should believe that one or another of his advisors could convince Trump to behave himself. He will always fire the messenger. And it only gets more unlikely that he will simply let the investigation play itself out; far too many secrets may be revealed. Every day, we hear more about Russians, loans, meetings and attempted cover-ups.
By all accounts, Trump is raging within the White House. He will act.
Congressional leadership should be considering all of this long and hard right now. If Trump is to be stopped, legislators need to tell him in no uncertain terms that any move in the direction of this endgame will trigger impeachment. They need to proceed rapidly with their own investigations to make clear that firing Mueller and pardoning members of his family will not stop the truth from coming out. If he cannot face the truth, then Nixon's end should be his as well. He needs to go before the missiles start flying.
Paul W. Kahn is a professor
of law and humanities at Yale Law School.
--
****
Juan
Patriotism is not a short and frenzied outburst of emotion but the tranquil and steady dedication of a lifetime.
- Adlai Stevenson