Something to Know - 9 June

Taking your mind off of the noise in Washington D.C. is appropriate today.  Trumpy is going to New Joisey to pretend to be enjoying golf, while his handlers are shadowing him to make sure he stays off his Tweeting device.   So, fixate on the fact that the House (by party line) gutted Wall Street financial regulations, and look at this fallout from Trump's regulations on immigration.   If you have ever been to Mackinac Island in Michigan, you know that it reeks of a playground for the 1%, or at least the upper 5%.   I found myself there several years ago while the state GOP was having its convention; interesting people.   Anyway the tourism industry and swanky places there are finding difficulty enough workers to staff their plush sites.   Here it is for your amusement and distraction.  Let Robert Mueller assemble the dots and pieces while we pay attention to other matters:
https://www.nytimes.com/2017/06/08/us/summer-jobs-visas.html?emc=edit_th_20170609&nl=todaysheadlines&nlid=2318049 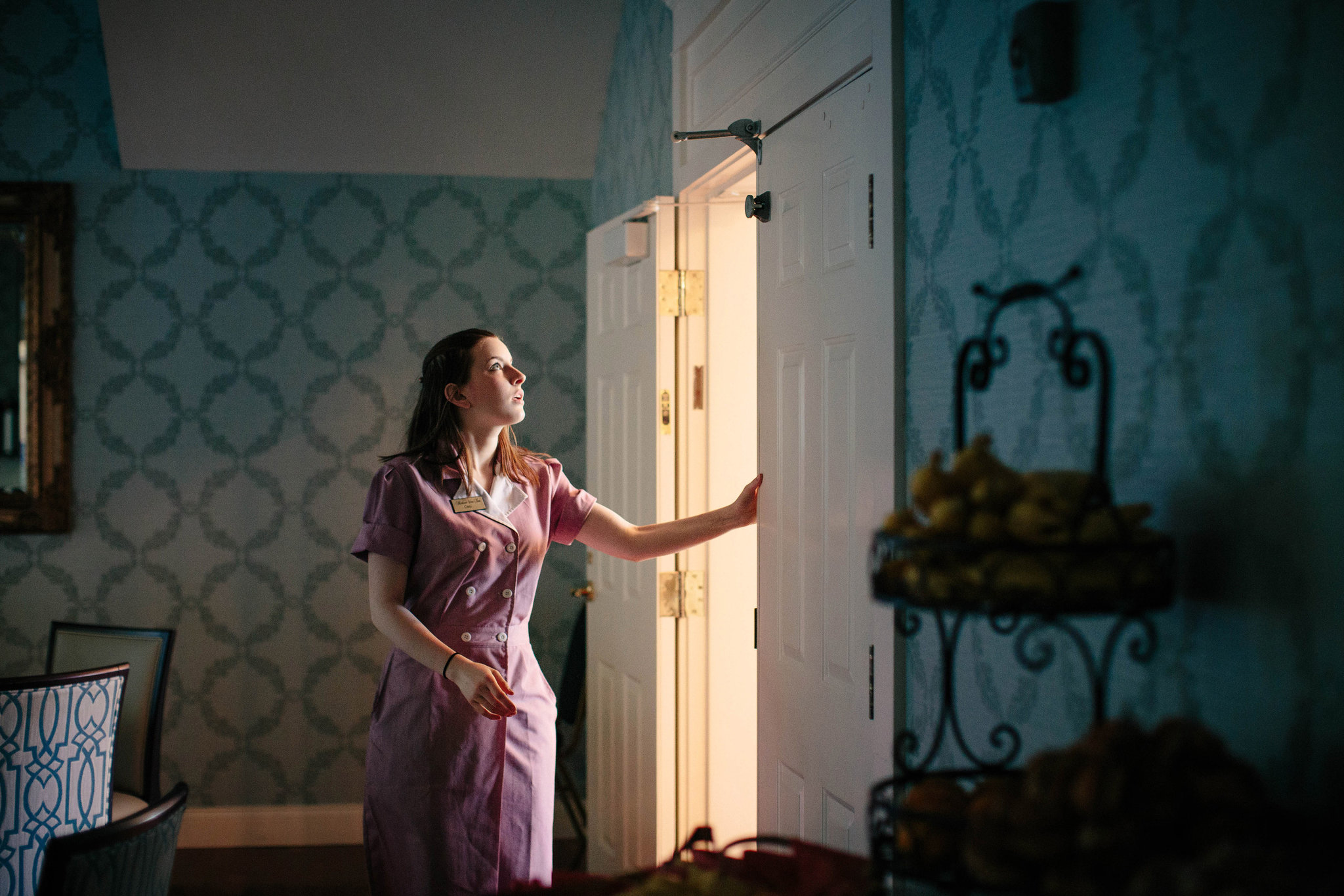 Cecilia Wooley opening the dining room at the Harbor View Inn on Mackinac Island, Mich. She now does some housekeeping, a job previously done by foreign workers under the H-2B visa program. Credit Alyssa Schukar for The New York Times
Visa Shortage Spurs Vacancies, for Jobs, at a Tourist Getaway
By MIRIAM JORDANJUNE 8, 2017
Mackinac Island has a permanent population of about 500 people and just as many horses, but no cars. From May to October, the picturesque Michigan getaway relies on about 3,000 workers to power its economic engine: summer tourism.
Historically, up to a third of those workers are foreigners, including Mexicans, Filipinos, Canadians and Jamaicans, who are hired on seasonal visas. But when many of the island's business owners applied for those visas this year, they heard from the government that none were left.
So at the Iroquois Hotel, a Victorian property on the waterfront where rooms command up to $1,200 a night, the owner is trying to figure out how to maintain its high standards without 30 Jamaican housekeepers. Other hotels are contemplating closing off whole sections. Even those who own the ubiquitous horses are wondering if they will have enough workers.
"It's urgent for us to get more visas to save the season," Brad Chambers, who operates horse tours and taxis, said.
The island whose selling point is being stuck in time is now suffering because it is stuck in the middle of a modern-day struggle over jobs and who should be doing them. So, too, are a number of the regional industries that define the American summer but have increasingly relied on non-American workers, from vacation spots in Maine and Minnesota to Gulf Coast shrimpers and the salmon fisheries of Alaska.
Shantel Scarlett, a Jamaican, clearing dishes at the Grand Hotel's afternoon tea. The hotel has been hiring seasonal foreign workers for decades. Credit Alyssa Schukar for The New York Times
The visas in question, known as H-2Bs, have an annual nationwide quota of 66,000, divided between winter and summer. But the summer allotment was exhausted quickly because Congress, concerned about the program's impact on American workers, chose in December not to renew a provision that allowed workers who had H-2Bs in some previous years to work without being counted against the quota. That decision effectively sliced the number of visas by at least 50 percent.
Congress has also given the homeland security secretary, John F. Kelly, the authority to release more visas, and a bipartisan group of lawmakers urged him in a May 12 letter to do so swiftly.
Citing the importance of the $5.8 billion seafood industry to her state, Senator Lisa Murkowski, an Alaska Republican, told Mr. Kelly during a recent Senate hearing that a "short-term fix is urgently needed."
Mr. Kelly responded, "For every senator or congressman who has your view, I have another who says, 'Don't you dare. This is about American jobs.' "
He added that he would probably release additional visas but did not specify when or how many. Even if he does, it would take two to four weeks for new workers to arrive because they must first pass an interview at an American consulate in their country of origin to obtain a visa. 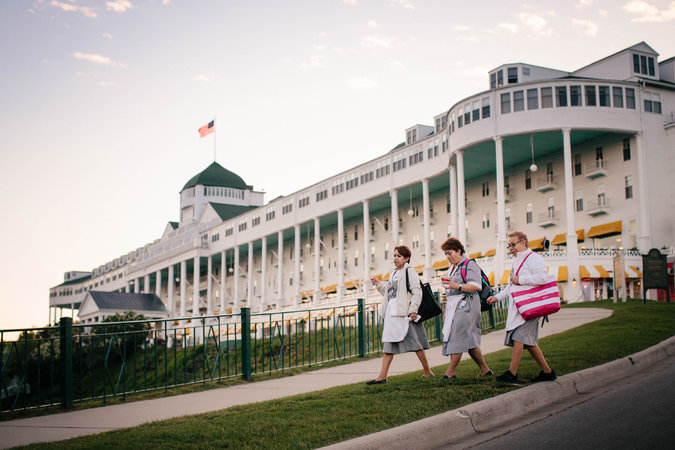 Visa workers from Mexico, from right, Lidia Rendon, Lupita Flores and Concepcion Romero after a shift at the Grand Hotel. Ms. Rendon has worked at the hotel for 22 years, Ms. Flores for 13 and Ms. Romero for 18. Credit Alyssa Schukar for The New York Times
President Trump — who uses H-2B workers in the winter at his Mar-a-Lago club in Palm Beach, Fla. — campaigned on a promise of reducing immigration and protecting American jobs. And while the H-2B, the offshoot of a temporary work visa created in 1952, has spawned less controversy than the H-1B visas for tech and other skilled workers, critics say the program displaces Americans just the same.
Unions, citing low wages, dispute employers' assertions that they need the visas because domestic workers will not take the low-skilled jobs. In a 2015 report, the Labor Department's inspector general expressed concern that employers were not trying hard enough to recruit Americans, as they are required to do before applying for the visas. The department has also documented cases of exploitation of foreign workers.
"Immigration flows are often driven by a desire to exploit a new foreign labor pool," said Dan Stein, the president of Federation for American Immigration Reform, which advocates stricter immigration policies. "Nowhere is there more evidence of this than in the illegal and temporary foreign labor pools."
Employers say that they would not use a program they regard as bureaucratic and expensive — they must pay fees for lawyers and for workers' transportation to the United States — unless they had to. And they complain that they are falling victim to a dysfunctional immigration system, even as they do the right thing by hiring legal workers.
Simply put, the companies say, Americans are not very interested in menial, short-term work.
Eric Haugen, who runs a landscaping company in the Denver area, regularly posts ads in newspapers, on Craigslist and on street signs for positions that pay $14 to $25 an hour, with health care and benefits.
Erik Schubert, a farrier, looked on as Shelbie Mosley cared for a horse's hooves at the Mackinac Island Carriage Tours stable. In previous years, this job fell to the company's longtime farrier, who lives 50 miles away in Canada but who was not granted an H-2B visa despite his previous 22 years of service on the island. Credit Alyssa Schukar for The New York Times
"We hire every single person who shows up" for an interview, he said. "We are lucky if one reports to work."
Mr. Haugen has offered current workers $100 bonuses for referrals, to no avail. "The labor pool really doesn't exist," he said, which is why he turns to the H-2B program for part of the year. He has secured 32 visas for Mexican workers who arrived in April.
Making matters more difficult is the tight labor market. In Maine, where unemployment is 3 percent, innkeepers and other employers have been hit hard by the dearth of H-2B visas. Last month, Gov. Paul R. LePage, a tough-on-crime conservative, conditionally commuted the prison sentences of some low-level offenders to help fill tourism jobs.
In late May, dozens of employers phoned in to an emotional 90-minute conference call with the United States Citizenship and Immigration Services, which administers the visa program.
On the call was Andrea Hance, president of the Texas Shrimp Association. The industry, which has been buffeted by cheap Asian imports, is now "in crisis" because of the visa shortage, she said. Some 400 to 500 H-2B visa holders, mainly Mexicans, work on vessels that ply the Gulf of Mexico from mid-July to early November. Efforts to find Americans willing to spend 30 to 60 days at sea have failed, Ms. Hance said.
During the salmon run, Alaska Glacier Seafoods in Juneau operates two shifts seven days a week to process the catch. The company typically relies on H-2Bs to fill 60 out of 200 positions but did not get any this year. "That may cause us to buy less fish, which would impact fishermen and their families," Mike Erickson, the company's president, said.
He dispatched two human resources workers to recruit in other states. In a month, they hired only 12 people. "At the end of the day, a lot of Americans think working in a fishy, smelly environment is not the thing for them," Mr. Erickson said.
On Mackinac, Mr. Chambers, the horse-tour operator, said he had found five workers to fill 20 positions for which he sought H-2B visas.
"We have done recruiting over the internet, in newspapers and in horse country to get people to come," he said.
His great-great-grandfather wrote a bill in 1898 banning cars, giving the island in Lake Huron its vintage appeal that draws a million visitors annually.
The 393-room Grand Hotel, the setting for the 1979 movie "Somewhere in Time," starring Christopher Reeve and Jane Seymour, has been hiring seasonal foreign workers for decades. "Without them, we would be looking at changing our entire business model," Jennifer King, general manager of the property, said.
The hotel got the visas it needed. Other businesses on the island have not been as lucky.
Phil Harrington, the sous chef at Yankee Rebel Tavern, has been coming in at noon instead of 3 p.m. to make sure preparations are complete before dinner guests arrive. "With the shortage of visas, it's more stress on me and others who have to work longer hours to do more of the grunt work," he said while chopping herbs, a task usually relegated to foreign workers.
Patti Ann Moskwa, the owner and a fourth-generation restaurateur, has been washing dishes herself.
"This is a legal program to supplement American workers," she said of the visas. "We aren't taking jobs from anybody".
--
****
Juan
Patriotism is not a short and frenzied outburst of emotion but the tranquil and steady dedication of a lifetime.
- Adlai Stevenson