To a large extent, the daily activities in Washington D.C. run our national mood.   The midnight eruptions and temper tantrums from Mt. Orange Volcano affect national and global communities.  The harsh reality is that we being led by a shameless tabloid news character.   It appears that he is the embodiment of Steve Bannon's edict to "deconstruct the administrative state".   At his immediate level, the president has appointed a bevy of inarticulate and incompetent cabinet secretaries and others who carry forth the mission to provide for the wealthy.  As we enter the 9th week of the new administration, we realize that there is no one running the store.   Outside of a draconian posture by ICE, and a flurry of executive edicts (resulting in no legislative action), the matter of business in not being run.   The guy runs around tweeting at all hours, and follows a measured and seemingly presidential performance with outbursts when his ego is bruised.  He is beyond rehabilitation, and serious constitutional acts need to begin to straighten things out:
The Opinion Pages | EDITORIAL
Home Alone in the Trump Administration
By THE EDITORIAL BOARD
MARCH 3, 2017
President Trump has appointed fewer than three dozen of the top 1,000 officials he needs to run the federal government. Worse, he doesn't think that's a problem.
The president seems to have lost interest in the nomination process after making his cabinet and Supreme Court picks, people involved in the transition say. Now, he's trying to pass off his inattention as some kind of plan. "In many cases, we don't want to fill those jobs," he said on Fox News this week. "What do all these people do? You don't need all those jobs."
Most incoming administrations move slowly during their first month. Mr. Trump has named only slightly fewer top officials at this point than Bill Clinton, George W. Bush or Barack Obama. But those administrations had scores of candidates in the pipeline by this time. Mr. Trump does not.
The Partnership for Public Service, a nonpartisan organization that assists transitions, recommends administrations should fill the top 400 Senate-confirmed agency slots before the August congressional recess. This means the White House has to get cracking, especially to fill roles vital to national security and the economy. It also means that aides like Steve Bannon, Kellyanne Conway and Reince Priebus might consider expending more effort finding good candidates than competing for Mr. Trump's attention. 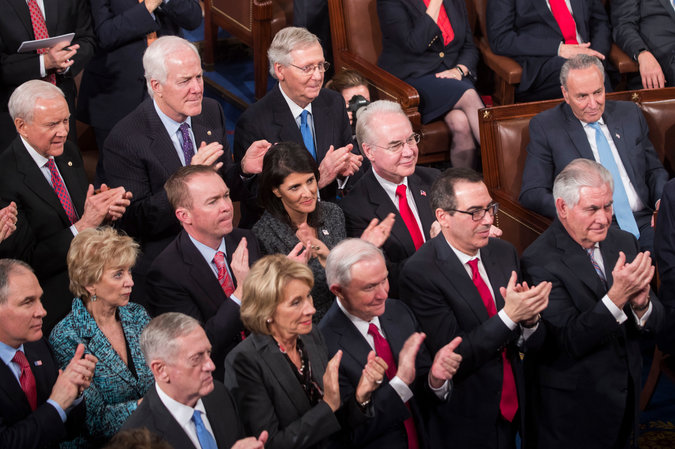 Members of President Trump's cabinet attended his speech on Tuesday. Credit Stephen Crowley/The New York Times
The National Security Council reflects the chaos: Lt. Gen. H. R. McMaster, the national security adviser hired after Michael Flynn's firing, inherited a council of career staff members and nervous, often unqualified Flynn loyalists. The federal agencies are effectively run by Trump "beachhead" teams, some 600 people who mostly are campaign donors, Trump employees, pals or allied politicos. Many know little about the agencies they inhabit, and they are understandably resented by career staff members.
None of this is surprising to people familiar with Mr. Trump's managerial style, a kind of mom-and-pop approach involving a tiny knot of family members and loyalists that is poorly suited to a federal government with three million employees around the world.
A story about Mr. Trump's management style in Politico Magazine this week makes for nerve-racking reading: As his business was going bust in the 1990s, it emerged that Mr. Trump didn't even have a chief financial officer — his lenders forced him to appoint one. The empty desks at the Treasury Department, which is led by Steve Mnuchin, who currently has nobody on his senior leadership team, aren't exactly an example of lessons learned. Mr. Mnuchin has had his nominees nixed because their views haven't jibed with those of someone in the White House, or because they have criticized Mr. Trump in the past.
Other cabinet officials, including Rex Tillerson at the State Department, have encountered hurdles at the White House. Shermichael Singleton, a senior adviser to Ben Carson, the secretary of Housing and Urban Development, may have set a record by getting fired before his boss's first day on the job. He was booted for writing critically about Mr. Trump during the campaign. He was replaced by a Trump Organization employee Mr. Carson doesn't know.
Mr. Trump promised a management mind-set "to make this country great again." First he needs managers.
--
****
Juan
Courage is resistance to fear, mastery of fear, not absence of fear.
- Mark Twain