Something to Know - 12 February 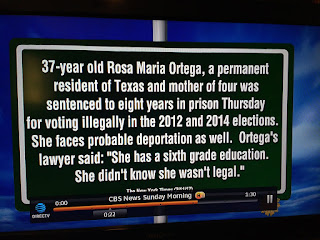 The trump Trunk is full of junk.  He also keep pulling stuff out of it, in seemingly unorganized and reckless fashion.  The more he pulls out and thrashes through executive order or tweeties, the faster his Steve-adores (Bannon and Miller) keep resupplying the trunk.   As I awake at night, and think of mothers being ripped from their families and children, to be deported by ICE raids - one has to wonder what how deep the inhumanity is going to go.   In Texas, a mother of 4 children was sentenced to eight years in prison for the crime of being here and voting (see attached photo).   Our perception of being is threatened.   As the world of journalism is being compromised the deception and fakery, we will depend on those who tell truth to power, and remind us of our core values and where our focus needs to be.
https://www.nytimes.com/2017/02/10/opinion/preserving-the-sanctity-of-all-facts.html?emc=eta1
The Opinion Pages | OP-ED COLUMNIST
Am I Imagining This?
Roger Cohen
Roger Cohen FEB. 10, 2017
Fact-based journalism is a ridiculous, tautological phrase. It's like talking about oxygen-based human life. There is no other kind. Facts are journalism's foundation; the pursuit of them, without fear or favor, is its main objective.
But in this time of President Trump's almost daily "fake news" accusations against The New York Times, and of his counselor Kellyanne Conway's "alternative facts," and of untruths seeping like a plague from the highest office in the land, there's increasing talk of "real" or "fact-based" journalism.
That's ominous. Fact-based as opposed to what other type? To state the obvious, fake news websites fed by kids in Macedonia to make a buck are not journalism. These sites use fabricated stuff in journalism's garb to further political ends.
There's a targeted "Gaslight" attack on journalists designed to make them doubt their sanity. It's emanating from the White House and aims to drag everyone down the rabbit hole where 2+2=5.
Velocity trumps veracity. That is the puzzle and the menace of our age.
Speed and disruption have more psychological impact than truth and science. They shape the discourse. The debunking of a fake news story is seldom as powerful as the story itself. Trump says "X." Uproar! Hordes of journalists scurry to disprove "X." He moves on, never to mention it again, or claims that he did not say it, or insists that what he really said was "Y."
People begin to wonder: Am I imagining this? They feel that some infernal mechanism has taken hold and is dragging them toward an abyss. The president is a reference point; if he lies, lying seeps deep into the culture. Americans start to ask: Will we ever be able to dislodge these people from power? What are they capable of?
Simon Schama, the British historian, recently tweeted: "Indifference about the distinction between truth and lies is the precondition of fascism. When truth perishes so does freedom."
The enormity of the defiling of the White House in just three weeks is staggering. For decades the world's security was undergirded by America's word. The words that issued from the Oval Office were solemn. It was on America's word, as expressed by the president, that the European continent and allies like Japan built their postwar security.
Now the words that fall from Trump's pursed lips or, often misspelled, onto his Twitter feed are trite or false or meaningless. He's angry with Nordstrom, for heaven's sake, because the department store chain dropped his daughter Ivanka's clothing line! This is the concern of the leader of the free world.
Unpresidented!
I was struck by how Paul Horner, who runs a big Facebook fake-news operation, described our times in The Washington Post: "Honestly people are definitely dumber. They just keep passing stuff around. Nobody fact-checks anything anymore — I mean, that's how Trump got elected. He just said whatever he wanted, and people believed everything, and when the things he said turned out not to be true, people didn't care because they'd already accepted it. It's real scary. I've never seen anything like it."
We've never seen anything like it because when hundreds of millions of Americans are connected, anyone, clueless or not, can disseminate what they like with a click.
Horner came up, during the campaign, with the fake news story that a protester at a Trump rally had been paid $3,500. It went viral. We've had fake news accounts of how Hillary Clinton paid $62 million to Beyoncé and Jay Z to perform in Cleveland, and how Khizr Khan, the father of the Muslim American officer killed in Iraq, was an agent of the Muslim Brotherhood. Fake news — BREAKING! SHOCKING! — swayed the election.
Now we have President Trump suggesting that the real fake news is his negative polls — along with CNN, The New York Times, The Washington Post and any other news organizations that are doing their jobs: holding his authority to account and bearing witness to his acts. Stephen Bannon, Trump's man of the shadows, thinks the media should "keep its mouth shut." We won't.
Sometimes I try to imagine what Trump's Reichstag fire moment might be. In February 1933, a few weeks after Hitler became chancellor, fire engulfed the parliament in Berlin — an act of arson whose origin is still unclear. A recent New Yorker article by George Prochnik quoted the Austrian writer Stefan Zweig on Hitler's savage reaction: "At one blow all of justice in Germany was smashed."
From a president who loathes the press, who insults the judiciary, who has no time for American ideals of liberty or democracy, and whose predilection for violence is evident, what would be the reaction to a Reichstag fire in American guise — say a major act of terrorism?
We can only shudder at the thought.
Facts matter. The federal judiciary is pushing back. The administration is leaking. Journalism (no qualifier needed) has never been more important. Truth has not yet perished, but to deny that it is under siege would be to invite disaster.
--
****
Juan