Something to Know - 23 January

Settling down to matters less emotional (speeches and marches and crowd sizes), the business of the day is that the 45th president is being sued in the State of New York for violating the emoluments clause of the US Constitution.  It's not like he was not warned about it before, and that he would be sued.  The Thin-Skinned Tangerine tried to comb it over with a cosmetic sham that puts his family members in control of his financial empire, even though he will still own all of the goodies.    So, this is what it is all about: 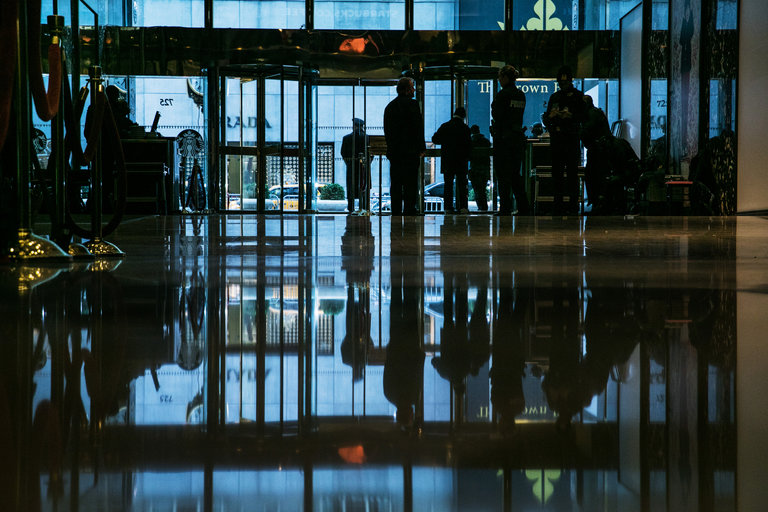 WASHINGTON — A team of prominent constitutional scholars, Supreme Court litigators and former White House ethics lawyers intends to file a lawsuit Monday morning alleging that President Trump is violating the Constitution by allowing his hotels and other business operations to accept payments from foreign governments.

The lawsuit is among a barrage of legal actions against the Trump administration that have been initiated or are being planned by major liberal advocacy organizations. Such suits are among the few outlets they have to challenge the administration now that Republicans are in control of the government.

In the new case, the lawyers argue that a provision in the Constitution known as the Emoluments Clause bans payments from foreign powers like the ones to Mr. Trump's companies. They cite fears among the framers of the Constitution that United States officials could be corrupted by gifts or payments.

The suit, which will not seek any monetary damages, will ask a federal court in New York to order Mr. Trump to stop taking payments from foreign government entities. Such payments, it says, include those from patrons at Trump hotels and golf courses; loans for his office buildings from certain banks controlled by foreign governments; and leases with tenants like the Abu Dhabi tourism office, a government enterprise.

"The framers of the Constitution were students of history," said Deepak Gupta, one of the lawyers behind the suit. "And they understood that one way a republic could fail is if foreign powers could corrupt our elected leaders."

The president's son Eric Trump, who is an executive vice president of the Trump Organization, said the company had taken more steps than required by law to avoid legal exposure, such as agreeing to donate any profits collected at Trump-owned hotels that come from foreign government guests to the United States Treasury.

"This is purely harassment for political gain, and, frankly, I find it very, very sad," he said in an interview on Sunday.

The president's lawyers have argued that the constitutional provision does not apply to fair-market payments, such as a standard hotel room bill, and is intended only to prevent federal officials from accepting a special consideration or gift from a foreign power.

"No one would have thought when the Constitution was written that paying your hotel bill was an emolument," one of the lawyers, Sheri A. Dillon, a partner at Morgan Lewis, said at a news conference this month.

The legal team filing the lawsuit includes Laurence H. Tribe, a Harvard constitutional scholar; Norman L. Eisen, an Obama administration ethics lawyer; and Erwin Chemerinsky, the dean of the law school at the University of California, Irvine. Among the others are Richard W. Painter, an ethics counsel in the administration of George W. Bush; Mr. Gupta, a Supreme Court litigator who has three cases pending before the court; and Zephyr Teachout, a Fordham University law professor and former congressional candidate who has been studying and writing about the Emoluments Clause for nearly a decade.

Ms. Teachout said the one place of potential concern was a nation like China, which rents space at Trump Tower in New York and is a major lender to an office building in New York that Mr. Trump controls in part.

Foreign governments, Ms. Teachout and other ethics experts warn, could rent out rooms in Trump hotels as a way to send a message to the Trump family. "If you think other countries are not going to try to leverage relationships with Trump's companies to influence trade or military policy, that is naïve," she said.

But Andy Grewal, a University of Iowa law school professor, argued in an academic paper published last week that a payment to a hotel owned by the Trump family, like the Trump International Hotel in Washington, would not violate the Emoluments Clause because the money is paid to a corporate entity and not to Mr. Trump directly.

"There is no connection between the payment and performance of services by the president personally," Mr. Grewal said.

"It would be a lot of fun to watch," he said of the lawsuit, "but I imagine it will be kicked out."

Mr. Eisen said the legal team intended to use the lawsuit to try to get a copy of Mr. Trump's federal tax returns, which are needed to properly assess what income or other payments or loans Mr. Trump has received from foreign governments.

The plaintiff in the lawsuit is a liberal group known as Citizens for Responsibility and Ethics in Washington, which until recently was controlled by David Brock, a Democratic Party operative and fervent supporter of Hillary Clinton's campaign.

Mr. Eisen now serves as chairman of the organization's board, and Mr. Painter is vice chairman.

The lawsuit may run into trouble, other legal experts said, given that CREW, as the organization is known, must demonstrate that it would suffer direct and concrete injury to give it standing to sue.

The group says it has suffered harm by having to divert resources from other work to monitor and respond to Mr. Trump's activities. For example, the group said, it has answered hundreds of questions from news organizations.

In a 1982 decision, the Supreme Court ruled that a civil rights organization had standing to sue because its use of black "testers" to see whether landlords and home sellers were abiding by federal law had hurt its ability to conduct other activities. But in recent decades, and outside the context of civil rights violations, the court has often been skeptical of broad assertions of standing.

Regardless of the lawsuit's fate, it is just the first hint of the legal assault that the Trump administration will face.

Anthony D. Romero, the executive director of the American Civil Liberties Union, said it was separately looking for plaintiffs to file a lawsuit alleging that Mr. Trump is violating the Emoluments Clause. It hopes to find a hotel or bed-and-breakfast that might compete against a Trump hotel as a party with standing to sue.

The A.C.L.U. filed an extensive Freedom of Information Act request on Thursday asking the Justice Department, the General Services Administration and the Office of Government Ethics for all legal opinions and memos they have prepared addressing financial or ethical conflicts that Mr. Trump might face. It could potentially use those documents in litigation against the Trump administration.

CREW filed a separate complaint with the General Services Administration on Friday over a provision that appears to prohibit the leasing of the Old Post Office building on Pennsylvania Avenue in Washington to an elected federal official. The building is the site of Mr. Trump's hotel.

Democracy is a pathetic belief in the collective wisdom of individual ignorance.
H. L. Mencken
Posted by 1ma2t