Something to Know - 10 August 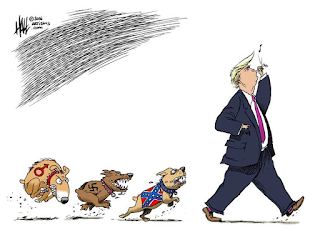 Folks, this is just not going away.   Thomas Friedman, writing for the NY Times , continues as we go into Day 2:
http://www.nytimes.com/2016/08/10/opinion/trumps-ambiguous-wink-wink-to-second-amendment-people.html?ref=opinion
And that, ladies and gentlemen, is how Israeli Prime Minister Yitzhak Rabin got assassinated.
His right-wing opponents just kept delegitimizing him as a "traitor" and "a Nazi" for wanting to make peace with the Palestinians and give back part of the Land of Israel. Of course, all is fair in politics, right? And they had God on their side, right? They weren't actually telling anyone to assassinate Rabin. That would be horrible.
But there are always people down the line who don't hear the caveats. They just hear the big message: The man is illegitimate, the man is a threat to the nation, the man is the equivalent of a Nazi war criminal. Well, you know what we do with people like that, don't you? We kill them.
And that's what the Jewish extremist Yigal Amir did to Rabin. Why not? He thought he had permission from a whole segment of Israel's political class.
In September, I wrote a column warning that Donald Trump's language toward immigrants could end up inciting just this kind of violence. I never in my wildest dreams, though, thought he'd actually — in his usual coy, twisted way — suggest that Hillary Clinton was so intent on taking away the Second Amendment right to bear arms that maybe Second Amendment enthusiasts could do something to stop her. Exactly what? Oh, Trump left that hanging.
"Hillary wants to abolish, essentially abolish, the Second Amendment," Trump said at a rally in Wilmington, N.C., on Tuesday. "By the way, and if she gets to pick her judges, nothing you can do, folks. Although the Second Amendment people, maybe there is, I don't know."
Of course Trump's handlers, recognizing just how incendiary were his words, immediately denied that he was suggesting that gun owners do anything harmful toward Clinton. Oh my God, never. Trump, they insisted, was just referring to the "power of unification." You know those Second Amendment people, they just love to get on buses and vote together.
But that is not what he said. What he said was ambiguous — slightly menacing, but with just enough plausible deniability that, of course, he was not suggesting an assassination. Again, it's just like the Rabin story. When I wrote about this issue back in the fall it was to urge readers to see the new movie "Rabin: The Last Day," by the Israeli director Amos Gitai, timed for the 20th anniversary of Rabin's assassination.
As The Times's Isabel Kershner reported from Israel when the film was released, it "is unambiguous about the forces it holds responsible" — the extremist rabbis and militant settlers who branded Rabin a traitor, the right-wing politicians who rode the "wave of toxic incitement against Mr. Rabin as they campaigned against the Oslo accords," and the security services that failed to heed the warnings that the incitement could get out of hand.
"Mr. Rabin is almost invisible in the first two hours of the film," she reported. "Benjamin Netanyahu, the opposition leader at the time, is shown in now-infamous historical footage addressing a feverish right-wing rally from a balcony in Jerusalem's Zion Square, as protesters below shouted for the death of Rabin — the 'traitor' — and held up photomontage posters of him dressed in an SS uniform."
Mr. Netanyahu, now prime minister, insisted he never saw the posters or heard the curses.
I am sure that is what Trump's supporters will say, too. But Trump knows what he is doing, and it is so dangerous in today's world. In the last year we have seen a spate of lone-wolf acts of terrorism in America and Europe by men and women living on the fringes of society, some with petty criminal records, often with psychological problems, often described as "loners," and almost always deeply immersed in fringe jihadist social networks that heat them up. They hear the signal in the noise. They hear the inspiration and the permission to do God's work. They are not cooled by unfinished sentences.
After all, an informal Trump adviser on veteran affairs, Al Baldasaro, a Republican state representative from New Hampshire, already declared that Clinton should be "shot for treason" for her handling of the Benghazi terrorist attack.
During the Republican convention, with its repeated chants about Clinton of "lock her up," a U.S.-based columnist for Israel's Haaretz newspaper, Chemi Shalev, wrote: "Like the extreme right in Israel, many Republicans conveniently ignore the fact that words can kill. There are enough people with a tendency for violence that cannot distinguish between political stagecraft and practical exhortations to rescue the country by any available means. If anyone has doubts, they could use a short session with Yigal Amir, Yitzhak Rabin's assassin, who was inspired by the rabid rhetoric hurled at the Israeli prime minister in the wake of the Oslo accords."
People are playing with fire here, and there is no bigger flamethrower than Donald Trump. Forget politics; he is a disgusting human being. His children should be ashamed of him. I only pray that he is not simply defeated, but that he loses all 50 states so that the message goes out across the land — unambiguously, loud and clear: The likes of you should never come this way again.
--
****
Juan