Something to Know - 9 July

There is an apparent convergence between our long-standing undercurrent of racism and the actions by some police that brings us to where we are today.  Despite the efforts by some police departments to educate and train their forces on better community relations and police work with people of color, things don't always work well.  All it takes is one small-town cop to do something horrifically wrong, and it reflects on all police departments in our nation.   The quality of our policing is only as good as the weakest and most-inept officer on duty in any city.   Now, with Racism, we are dealing with an even greater problem, for we all are part of the community of intolerance and ignorance, while the police are but one small component of our community.   Having lived in the South for 24 years, I saw a whole different subtle form of racial intolerance and bigotry than I had seen growing up and living in Southern California.  I "joined" the Tea Party back in 2008 for the purpose of investigating why this new organization was able to use, rent-free, our local public venue for a city-wide Tea Party event, while the Democrats would have to pay to rent the place.   The Tea Party Patriots have been sending me all of their emails ever since that time, and they have allowed me to see what Jenny Beth Martin (the leader of the TPP) is up to.  Seems as though she is grooming herself to run for something.   Anyway, read this article for a flavor of how the TPP has provided a sanitized sanctuary for the descendants of the KKK.   As the article points out, what is to become of of the TPP after Obama leaves office?:
http://www.vox.com/2016/7/7/12118872/southern-racism-tea-party-trump
POLICY & POLITICS

How Southern racism found a home in the Tea Party 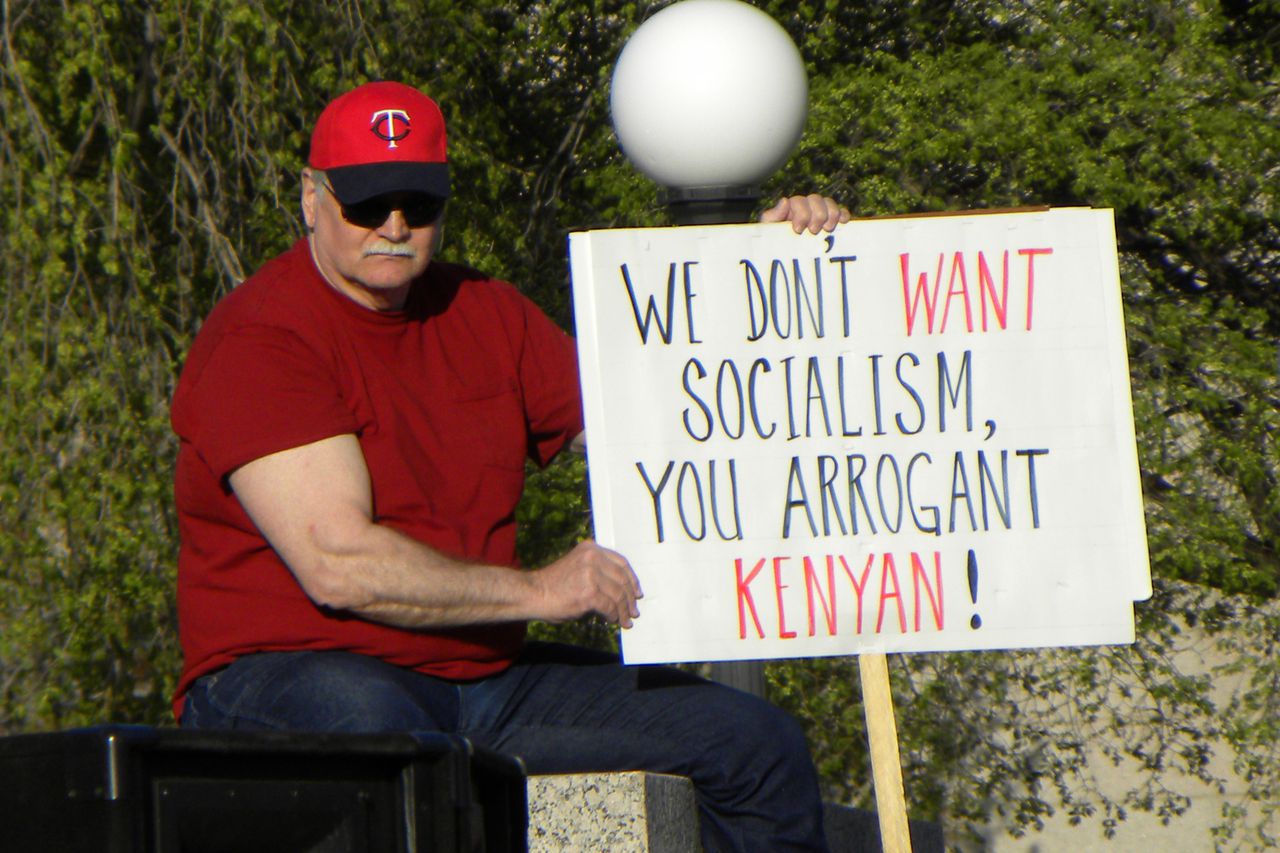 The Tea Party's small-government message coexists with ... other stuff.Fibonacci Blue

Within days of President Obama's inauguration seven and a half years ago, the Tea Party took national politics by storm. Sympathetic pundits and affiliated politicians claimed that the movement amounted to the formation of a new third party that represented widespread economic concerns, its motivation based on outrage over deficit spending, the stimulus package, and the national debt.

Yet coverage of Tea Party rallies also included images of protest signs covered with racist slogans such as ''A Village in Kenya Is Missing Its Idiot: Deport Obama!'' ''Congress = Slave Owner; Taxpayer = N**gar,'' and ''Imam Obama Wants to Ban Pork: Don't Let Him Steal Your Meat,'' among other inflammatory proclamations.

Tea Party members argued that their opposition to Obama was based on differences over economic policies and not on racial animus – that those placards were extreme outliers. Yet scholarly debates continue over where Tea Partiers' intolerance for government spending on, say, unemployment benefits for those deemed undeserving ends and racism begins.

Those debates remain significant in the lead-up to the 2016 presidential election, as accusations of racism trail the presumptive GOP presidential nominee, Donald Trump. In other words, what can the Tea Party teach us about Trump's ascension?

A tale of two Tea Parties

One overlooked aspect of the Tea Party is its strongly regional character. National survey data (2012) from the Blair Center of Southern Politics and Society at the University of Arkansas, including a robust oversample of Southerners, allows us to explore more fully this aspect of the movement.

First, the Southern Tea Party makes up a disproportionate amount of the Tea Party movement in general. Although the South, defined as the 11 states of the former Confederacy, constitutes only 31 percent of the American population, it is home to 56 percent of Tea Party members nationally.

And the Southern Tea Party is a different beast from the Northern Tea Party. Our most striking finding in that 2012 data is that racism significantly predicts Tea Party membership in the South — and not just any kind of racism but "old-fashioned racism." A high old-fashioned racism score means a respondent is willing to say on a survey that African Americans are lazy, untrustworthy, and unintelligent on a 7-point scale (meaning there is plenty of room for neutrality, room to hide one's views).

Given today's social norms, only the most defiant, the most willing to embrace racial stereotypes, will admit such prejudice, so researchers had in recent years largely abandoned such questions in favor of subtler measures of racial resentment (including, for instance, a strong denial of institutional racism). But anti-Obama sentiment among whites has brought old-fashioned racism back into the public arena, and the Tea Party in the South gave it a home.

Naturally, racism is far from the whole story of even the Southern Tea Party. Tea Partiers nationally viewed the stimulus package, spending on unemployment benefits, and the size of the budget deficit with more alarm than other Americans. Yet both nationally and in the South, the most significant predictor of Tea Party membership is disapproval of President Obama.

There are, of course, many reasons beyond racism that respondents could disapprove of Obama, including partisanship and ideological differences. Yet in the South, the dovetailing of racist sentiment and intense disdain for the nation's first black president makes it hard to conclude that the Southern Tea Party is not substantially shaped by racial animus.

The history of slavery and Jim Crow, along with the longstanding tendency of white Southerners to define themselves racially as "us versus them" made the racist side of the Tea Party's anti-Obama spirit all the more attractive.

The Southern Tea Party has other distinctive demographic features that set it apart from its cousin beyond the Mason-Dixon Line. Tea Party members in the South are younger, less educated, and more likely to be women.

None of these differences are all that surprising to those who study the region and who know that white Southern women are as conservative as white Southern men (if not more so in some cases), and that the passage of generations have not necessarily eroded Southern racism, particularly in pockets of the region that remain segregated. And education, long considered the most powerful antidote to racism, still lags significantly in the South. All of these factors work in tandem.

But regional distinctiveness is not the only relevant lesson the Tea Party offers for the current political season. Related Blair Center data from 2010 helps illuminate another important feature of the Tea Party nationally — namely, the relationship between core members and fellow travelers or sympathizers.

As I've suggested, the Tea Party is not just a party; it is an idea, a force, an anti-Obama movement that appeals to nonmembers throughout the country. The Tea Party has become an amorphous symbol that can be adopted or lauded by anyone who opposes Obama.

In 2010, only 10 percent of Americans were members of Tea Party organizations. However, if you add in the frustrated Americans who admit feeling very warmly toward the Tea Party, the figure roughly doubles. This larger group includes people who would join the Tea Party if they could, but who live in communities that lack any formal organization to join, which is especially common in rural areas. This dynamic helps to explain why the Tea Party looms larger as an idea than it does as a political party.

In the 2010 data, we found that card-carrying Tea Partiers tend to be purists ideologically and more conservative than the larger sympathetic population. Those who have warm feelings about the Tea Party but are not official members manifested a greater degree of racism, not the bold old-fashioned racism we found in the South in 2012, but a less direct "symbolic racism."

This measure of racism includes a series of questions that probe white resentment towards African-American advancement as well as the degree to which participants deny that black people in America face barriers to advancement that white people do not.

The different characteristics of these two groups may help explain why card-carrying Tea Partiers reject so vehemently the accusations of racism. That rejection reflects tension between the (purist) core and the (racist) periphery of the movement.

In sum, when Tea Party activists argue that they are motivated by economic concerns, these claims may be true — but largely in the non-South. In the South, the motivations for Tea Party membership continue to follow historic white animosity toward African Americans.

The election of the first African-American president highlighted the country's progress toward racial equality, which remains anathema to a minority of white voters. Nowhere was the response more reactionary than in the American South, where pockets of the region remain segregated even now — and in those pockets the idea of an African-American president seems impossible. That direct and vocal Southern white racism, while tainting the Tea Party's economic message, appealed to a larger, but perhaps quieter, resentful American population.

Where will the racist anger go?

Perhaps the greatest test of Tea Party motivation nationwide comes now in 2016, when President Obama is no longer on the ballot. If the Tea Party is, in fact, an anti-Obama party, then when he goes so too should it.

Yet it's also possible that the racism, distrust, and hate brought forth by Obama's election has found a new outlet. Maybe this anti-Obama faction also wants to ban Muslims and build walls along the Mexican border. (Note that some Tea Party signs incorrectly yet viciously attacked President Obama's supposed Muslim faith.)

Donald Trump's campaign gained traction only when he won the early primary in South Carolina and when he dominated the new "SEC primary," in which a group of Southern states collectively moved their primaries to Super Tuesday in the hopes of influencing the GOP nomination.

And influence they did. Without white Southern support, Trump might never have gained the momentum that has made him the presumptive nominee, defeating a crowded field of contenders.

The point is not that racism or xenophobia or an "us versus them" cosmology does not exist in the rest of the country. It's that the Tea Party showed that politicians and political movements can still make direct racist appeals to white Southerners, and a substantial number of them, in the Republican Party's largest geographic voting bloc, will still applaud. And that applause resonates nationally, falling on quite a few sympathetic ears.

Angie Maxwell is an associate professor of political science at the University of Arkansas and director of the Diane D. Blair Center of Southern Politics and Society.