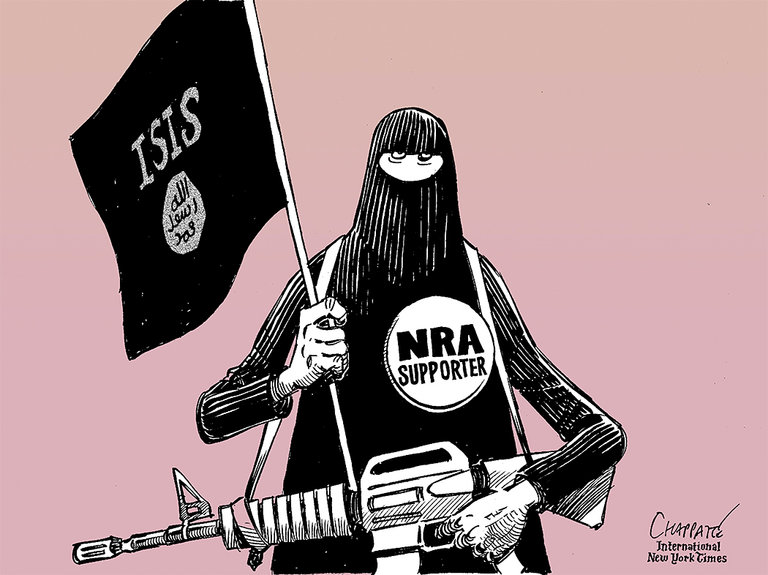 Omar Mateen legally purchased a handgun and a "long gun" within the last few days.

Consider the thought that Donald J. Trump (yes, him) is like Chemo Therapy.   The Cancer that has infected the Republican Party can only be placed in remission by being subjected the a very heavy dose of Trump...a very HUGE dose of Trump.  The concern by many is that the cure may kill the body (the USA), and not just the abnormal growth cells within the GeeOpie.   Stay alert, and healthy of mind and purpose.   We will weather the storm:
http://www.nytimes.com/2016/06/15/opinion/campaign-stops/decoding-donald-trump.html?emc=eta1
The Opinion Pages |   CAMPAIGN STOPS
Decoding Donald Trump
Andrew Rosenthal JUNE 15, 2016
Donald Trump is a stickler for words — other people's words.
In the world according to Trump, the proof of Hillary Clinton's inability to deal with terrorism is that she doesn't use the phrase "radical Islam" enough. That's nonsense, of course, as President Obama pointed out on Tuesday. "There is no magic to the phrase 'radical Islam,'" he said. "It's a political talking point, it's not a strategy."
Actually, for Trump it is a strategy — the strategy of the propagandistic smear, a dark art at which he excels. That's why he figured he could accuse the president of tolerating terrorist attacks — or, he hinted darkly, abetting them. (Because, of course, Obama is secretly a Muslim.)
When he was pressed later about the meaning of his comments, Trump offered a dismissive rhetorical shrug. "I'll let people figure that out for themselves," he said.
It's incredible, and not a little terrifying, that a candidate for president could be that cavalier, but let's try to figure out what he means. After all, it matters a great deal what people who want to be president say and do not say, especially at moments like this, after the murder of scores of innocents.
In speeches on Monday, Trump and Clinton both talked about the specific nature of this killing frenzy, an attack on a gay club in Orlando, Fla. "I want to say this to all the L.G.B.T. people grieving today in Florida and across our country," Clinton said. "You have millions of allies who will always have your back."
Trump, amazingly enough, said something similar: "Our nation stands together in solidarity with the members of Orlando's L.G.B.T. community."
The big difference is that Clinton meant it. She supports marriage equality and laws that ban discrimination against gay, lesbian, bisexual and transgender Americans. Trump has said he would "seriously consider" appointing judges who would reverse rulings in favor of marriage rights. He's fine with the "L.G.B.T. community" as long as it doesn't seek the rights that all Americans should have.
Both Trump and Clinton talked about gun control. Clinton said she supported a ban on firearm sales to people on terrorist watchlists, and added that "weapons of war" like the one wielded by the Florida killer "have no place on our streets."
Clinton did not mention the simple fact that if we stopped selling guns today, there would still be too many. The only real solution is to reduce the number of weapons in circulation, but no politician, including Clinton, wants to talk about that.
Trump merely dished up a version of the usual lie propagated by anti-gun control forces, saying that Clinton wants to revoke the Second Amendment. He intends to do nothing about the scourge of firearms in America.
Clinton offered a serious discussion of terrorism. Trump offered his usual stew of fear, jingoism and hatred. He repeated his call for "a ban" on Muslim immigration into the United States, expanding it to immigrants from countries that are the locus of terrorism. He called it a "temporary" ban, but that's a lie. Trump said the ban would be lifted when Muslims and other immigrants can be screened "perfectly," but that will never happen, and Trump has to know that.
Trump never bothers to talk about what he would do about the millions of Muslims already living in the United States. Would he round them up and deport them, as he is proposing to do with the millions of undocumented immigrants living in the country?
Let's be absolutely clear. This is not just about bigotry. The mass arrest and forced movement of large populations has been an instrument of genocide throughout history. That is how the Turks committed genocide against Armenians in the early 20th century, how the United States government decimated some Native American tribes and how Stalin killed millions of his own citizens.
It's possible that Trump doesn't think about history. It is clear, though, that he thinks about voters, and that he is counting on them to support him out of fear and bigotry. And he is counting on the leaders of the Republican Party to let hi
--
****
Juan