The in-laws are about to depart on a boat, so now I'm in charge of the blog--at least until J5 returns. 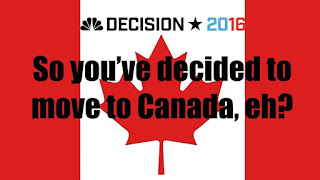 O Canada
Apparently, Google searches of the phrase "move to Canada." are up, in part due to the impending doom of a Trump presidency. (I recall looking at this after W got reelected in 04. Oy.) Vox capitalized on that by running a thoughtful piece that includes interviews with actual Americans who immigrated to Canada, like my college friend Neda Maghbouleh.

Neda and her husband are sociology professors in Toronto. The Vox explainer crystalized the differences in the approaches to immigration and growth by the two countries, which I personally found useful. Canada prioritizes admitting highly skilled workers and refugees. Family reunification - a cornerstone for our policy - is not as much a priority in Canada. My friend Neda shared with Vox story that it doesn't appear that she will be able to obtain visas for her parents to come to Canada from Portland, Oregon until the next decade. Her kid, however, is a Canadian citizen, which is the golden ticket if you wanted my opinion.

Can you really become a software engineer if you were a sociology major at Pomona?
We know that is possible to have a long career in information technology even if your were a sociology major at Pomona. My father-in-law was a sociology major, class of 63 who trained to become an engineer in the army after graduation. Then he went to work for a legacy airline carrier, doing everything from throwing bags onto planes to customer service. Because he understood operations so well, he was uniquely qualified for a project manager role in IT at Delta--and he majored in sociology!!! Today's liberal arts graduates are still making their way into tech jobs, only now they are more likely to be doing it as software engineers (translation: coders).

My friend Kyle (Pomona sociology '05) talked about his journey from the liberal arts to qualifying for a growing vocation in this lovely essay for Quartz. Check it out to learn how young people are trying to adapt to the job market.

Yes, there is such a thing as grandmother hormones
And I am shameless in capitalizing on it. As a mom of a newborn, it's not enough to talk about baby stuff all day with my husband: I thoroughly enjoy recapping the day and whatever my kid has done with his grandmother (Mrs. J5). And she gobbles it up. I thought maybe it was just her being really excited. This NYTimes op-ed suggests some of it is hormones - or basically, a biological instinct. Either way, I'm glad to have the in-laws love and support on this journey. I wish them a lovely time, and can't wait to see them again.