This article from today's NY Times is very closely related to the global drought issues, and brings to mind what we in California are experiencing.   Vietnam has suffered from the heavy-handed policies from a central government that is not listening to the concerns of environmentalists.   Getting all the water to produce an exaggerated rice harvest has resulted in sea water encroaching up the damned rivers to kill the crops and all related plants.   Does this bring to mind a pea-brained blowhard coming to our state of California and vowing to open up the flood gates to unleash all the water?   Poor Donny....he's as dumb as the Communist Party Central Planners of Vietnam:
http://www.nytimes.com/2016/05/29/world/asia/drought-and-rice-first-policy-imperil-vietnamese-farmers.html?emc=eta1

SOC TRANG, Vietnam — When the rice shoots began to wither on Lam Thi Loi's farm in the heart of the Mekong Delta, a usually verdant region ofVietnam, she faced a hard choice: Let them die in the parched earth, or pump salty water from the river to give them a chance.

Like many seasoned farmers here, she risked the saline water. The crop perished within days.

The Mekong Delta, Vietnam's premier rice growing region, is suffering its worst drought since French colonial administrators began recording statistics in 1926. Giant cracks, some a foot deep, gouge the hard earth; brown stalks of dead rice litter the fields; and the dryness is so severe even the pests lie shriveled on the ground.

"I've been planting rice since I was 13, and I have never seen anything like this," Ms. Loi, 38, said as she sat in her neat living room. "In February I got one bag of rice. Last year we harvested 1.4 tons."

The increasingly dramatic effect of El Niño, the weather phenomenon that causes excessive heat and reduced rainfall in Southeast Asia, is the prime reason for the crop failures in the delta, scientists say. But it is not the only one. 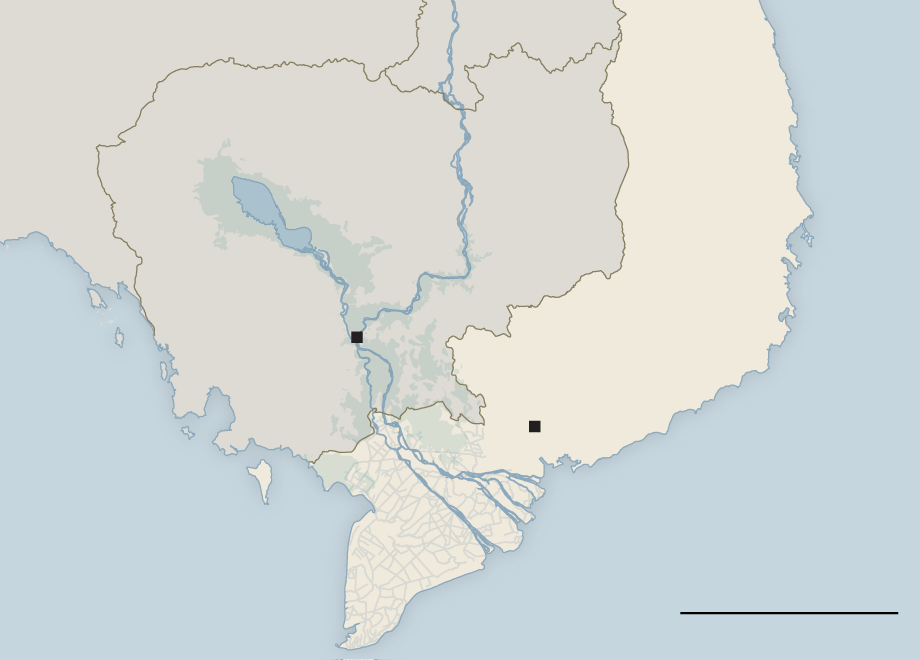 By The New York Times

The Communist government's insistence that farmers grow three rice crops a year, instead of the traditional one or two, has depleted the soil of nutrients, exacerbating the impact of the drought, they say.

And water from the sea has invaded the lower reaches of the Mekong River, which is more shallow than usual, sweeping saline water farther up the delta than ever before and wiping out rice fields.

All 13 provinces in the delta, home to 17 million people, or one-fifth of Vietnam's population, are suffering from salt water in agricultural lands, the government said. The Ministry of Agriculture and Rural Development reported in March that 200,000 households experienced serious water shortages, and that the number was rising.

Saline water has long been invading the delta, but because of the drought there is not enough fresh water in the river and its distributaries to dilute the seawater. The salt is having a more deleterious impact, the scientists say.

The rice crop crisis has highlighted the need for the government to adjust its heavy emphasis on rice growing, and to encourage shrimp farming as a more profitable and practical substitute, said Nguyen Huu Thien, a consultant with the International Union for Conservation of Nature.

"Vietnam is the second-biggest rice exporter after Thailand," Mr. Thien said, referring to the Southeast Asian region. "But there is no glory in that because the farmers are not thriving, and there is a lot of migration out of the delta."

The government is stuck on a "rice first" policy that harks back to the 1970s, after the Communist victory in the Vietnam War, when the people were hungry and the country was isolated, bereft of trading partners and without a manufacturing sector.

In those days, the government mobilized work teams to construct earthen dikes along major canals in the delta to keep the salt water out and to foster better conditions for rice growing, said Timothy Gorman, a researcher on the delta at Cornell University.

Government-financed sluice gates were built in the 1990s, he said. By 2001, some farmers were so fed up with the efforts to hold back the salt water that they attacked the sluice gates and destroyed them, making way for the cultivation of tiger prawns in the western part of the delta.

Many farmers know the saline water is good for producing shrimp, Mr. Gorman said, but while they get subsidies for rice, they are not encouraged to switch to shrimp. 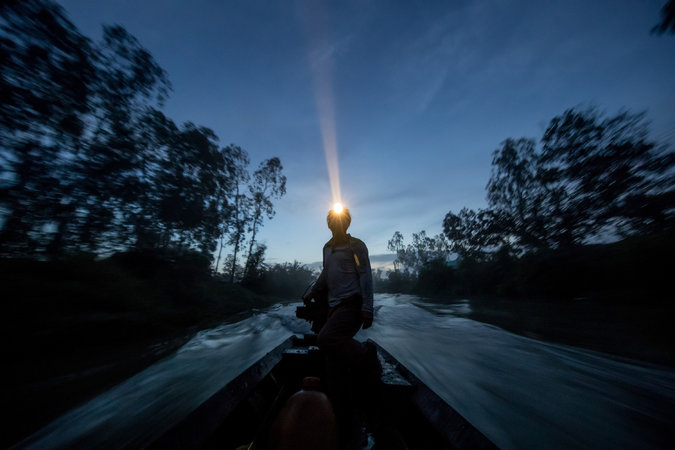 The construction of hydropower dams upstream from the delta, and dams in China's southern province of Yunnan, are adding to the woes.

A 2010 study commissioned by the Mekong River Commission warned against the building of 11 dams in Laos and Cambodia because they would trap valuable sediment and stop it from reaching the delta. The report was ignored, two of the dams are under construction, and the rest are scheduled to go ahead.

In a rare concession to Vietnam, the Chinese released water from dams in Yunnan Province in March, but the flow was too small to make a difference to the failing rice crops, the Vietnamese authorities said.

Resentment toward the government is rising among the villagers.

The provincial authorities kept them in the dark, residents said. In October, the water level in the vast Tonle Sap Lake in Cambodia, which feeds into the Mekong River, was perilously low.

Two other big reservoirs of water in the Vietnamese provinces of An Giang and Dong Thap that help soak the rice fields were also at extremely low levels.

Ms. Loi said she had not been warned. She went ahead, plowing and planting. She has lost more than $1,000 on seeds, fertilizers and labor, she said.

Yet when she attended a meeting called recently by district officials to discuss the problems, the villagers were met with scorn, she said. "They offered me only $120," she said. "It is nothing. We have no right to negotiate with them. They said the farmers don't know anything. But we do know our business."

On the banks of the river two hours away, a more prosperous rice farmer, Huynh Anh Dung, 34, presides over six acres of land, his share of a vast property founded by his grandfather nearly 100 years ago.

When his rice crop failed in February because of salty water, he decided to forsake a third crop. He knew it was folly to try again.

Some farmers have fled to Ho Chi Minh City to find work, leaving villages with only half their population.

In some towns and villages, farmers like Mr. Dung have comfortable homes with polished wood furniture, televisions, motorbikes for getting around on the roads and outboard motor boats on the rivers. A mildly sweet iced tea, with crushed ice, is served as a welcoming drink to visitors.

Mr. Dung is staying put, tethered to his ancestral lands. He had saved enough money from past crops that he did not need part-time work. His uncle had started growing organic bitter melons on a portion of land on the family farm, a project that was doing well.

On a recent morning, he hired a worker to dig shallow trenches in the fields so that when the rains finally arrive the salt now embedded in the earth will run away more quickly.

The signs of well-being will not last, said Mr. Thien, who was one of the authors of the 2010 report on the dams. With so many dams coming on line upstream, the lack of sediment will eventually kill the delta, leaving it a wasteland in the next 100 years or so.

"The impact of the dams will be irreversible," he said.

Mr. Dung could not see so far into the future. As he contemplated the salt damage, and his scorched earth, thunder rumbled in the distance. Gray clouds hung overhead, the first in six months. "I hope it rains," he said.