Something to Know - 6 April

This article is presented because it embodies a hard-core conservative wall that Trump will never win.  This is why Trump will never get the GeeOpie nomination.   The RNC knows this, and is trying to step through the minefield that will discourage Trump from burning up in flames now and running as a 3rd party.   The way I see things play out in Cleveland, is that no one will win on the first ballot.   At that point, all hell will break loose, and Paul Ryan will be thrust forward and will get the GOP nomination.   If Trump is smart, he will just fly out that night back home to Florida and sulk, but his ego just may want to run as a 3rd party, but it will be too late.  At this point, the Democrats will have to make the HUGE decision, and assess who will do better against Paul Ryan (Hillary or Bernie).    The Pragmatic and Unifying Republican or the Social Democrat?    Fortunately for the Dems, their convention is one week after the GeeoPie's and allow time for very deep thought for the correct answer.   Stay tuned for a barrel of fun and suspense:
http://www.nytimes.com/2016/04/05/us/politics/donald-trump-wisconsin-radio.html?emc=eta1

6 Talk Radio Hosts, on a Mission to Stop Donald Trump in Wisconsin

By ASHLEY PARKER and NICK CORASANITIAPRIL 4, 2016 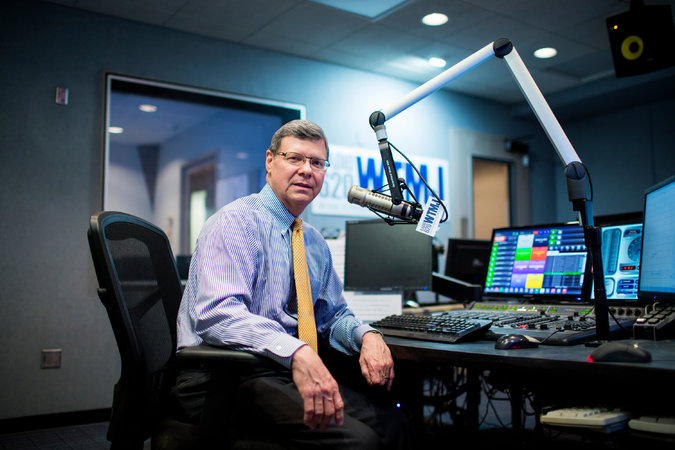 Charlie Sykes, a conservative talk radio host in Milwaukee, has been criticizing Donald J. Trump, charging that Mr. Trump had violated Wisconsin's "tradition of civility and decency" in politics.

MILWAUKEE — Charlie Sykes, a popular talk radio host here and leader of the "Stop Trump" movement, had spent months hammering Donald J. Trump on his show, calling him a "whiny, thin-skinned bully" and dismissing his supporters as "Trumpkins."

So Mr. Sykes was surprised when the Trump campaign reached out to ask if the billionaire reality star turned presidential front-runner could come on his show.

The 17-minute interview last week was contentious and combative, with Mr. Sykes pressing Mr. Trump to apologize for comments he has made denigrating women, calling him a 12-year-old playground tormentor and lamenting that he had failed to introduce him to Wisconsin's "tradition of civility and decency."

Later in the week, as Mr. Trump crossed the state, he seemed to acknowledge the power of Wisconsin's talk radio culture, which has been an anti-Trump force, by railing aloud against it for deceiving voters.

"In certain areas — the city areas — I'm not doing well," Mr. Trump told voters in Racine, bemoaning his lack of support on talk radio. "I'm not doing well because nobody knows my message. They were given misinformation."

Mr. Sykes, along with a handful of other local radio hosts, has spent his mornings criticizing and castigating Mr. Trump over the airwaves. And if Mr. Trump loses the Wisconsin primary on Tuesday, he will have Mr. Sykes and his merry band of talkers partly to blame.

In a nominating contest that has exposed fissures in theRepublican Party, Wisconsin's conservative talk radio apparatus remains remarkably united on at least one point: its deep dislike of Mr. Trump, who for months has been the focus of its fiery attacks.

"Can someone win without talk radio?" Mr. Sykes asked during a commercial break from his program. "Yes, theoretically. Except no one has."

Wisconsin's conservative talk radio has long played an outsize role in a state whose position in the Republican primary calendar has now given it heightened status in the nominating process.

When Mr. Walker, who ended his own presidential bid by offering a pointed rebuke of Mr. Trump, endorsed Mr. Cruz last Tuesday, he did so by calling in to Mr. Sykes's show. And the week before, Mr. Cruz opened his Wisconsin primary bid in a friendly interview with Mr. Sykes.

Mr. Trump, by contrast, has found himself under near constant fire from the conservative talk radio hosts who dominate the southern part of the state, including the three counties that contain parts of Milwaukee: Waukesha, Ozaukee and Washington. They are among the most conservative counties in Wisconsin, and where Mr. Trump is struggling the most.

The most popular conservative talk show hosts here — Mr. Sykes, Jeff Wagner of WTMJ, and Mark Belling, Vicki McKenna and Jay Weber of WISN — are united in their disdain for Mr. Trump, with Jerry Bader, a radio personality at WTAQ in Green Bay, rounding out the group.

"The thing that's been unique in this presidential race is, for some reason, the three who work here — Jay, Vicki and myself — and our competitors, Charlie and Jeff Wagner, all seem to despise Trump," Mr. Belling said in an interview. "We all just kind of came to this conclusion independently. I think it's just that we're not as stupid as some of the people that are falling for Trump's crap."

In Mr. Belling, Mr. Trump has found an antagonist who is just as bellicose as the real estate billionaire himself. In his broadcast on Monday, Mr. Belling called Mr. Trump "the biggest wussy of all time," "a big crybaby," and a "sissy," before turning his attention to the campaign team and declaring: "His staff are probably just a bunch of butt kissers."

Graphic: How the Rest of the Delegate Race Could Unfold

And that was just in the first hour.

"It seems to me that if you are an intelligent, thinking conservative who cares about issues, you'd be mortified that this moderate loudmouth boor would be hijacking a movement that you cared about," Mr. Belling said later in an interview.

Nonetheless, on Monday, Mr. Trump made a round of calls to the state's local radio hosts. The series of interviews, contentious and combative, did not go particularly well.

Ms. McKenna challenged his promise to build a wall at the nation's southern border — "What does it look like? Where does it go?" she pressed him — and urged him to declare "wives and kids off limits," after Mr. Trump's public spat involving pictures of his wife, Melania, and of Mr. Cruz's wife, Heidi.

Yet despite Ms. McKenna's pleas that Mr. Trump "unify" the party, the interview ended on a rough note, with Mr. Trump hanging up on her.

Mr. Bader, the host in Green Bay, began his interview with Mr. Trump bluntly as well. "I have some concerns about both your behavior and what I consider to be vague policy positions," he said.

In an interview, Mr. Bader described his conversation with Mr. Trump as "feeling like a 'Saturday Night Live' skit." "Like this isn't real," he said. "And to me that's what his entire campaign feels like."

That Mr. Trump, who has singled out reporters he does not like and barred certain media outlets he deems critical from attending his events, has pandered to the talk radio crowd here not only highlights the group's clout, but also may reveal a general election calculation.

"The last thing you want to do as a Republican is irritate your base as you go into a general election in a swing state like Wisconsin," said Mark Graul, a Republican strategist who ran George W. Bush's campaign in Wisconsin in 2004 and has run other statewide races since. "And in many ways, talk radio is the voice of base Republicans in Wisconsin."

The electorate, which gave rise to Speaker Paul D. Ryan, whose attraction is predicated on civil discourse and serious policy proposals, is particularly well primed for the talk radio pitch here. It appeals to conservative principles as well as voters' Wisconsin-nice demeanor.

"For whatever reason, there is a pragmatism to Wisconsin hosts that you don't see en masse in a lot of other hosts," Mr. Bader said. "I believe I have a moral responsibility to do whatever small part I can in stopping Donald Trump. It's beyond politics for me. I think he's dangerous."

And from Mr. Sykes: "I think talk radio has been more substantive, more intellectually serious here and, therefore, less prone to embrace an entertainer."

"I feel very strongly that Donald Trump poses a fundamental challenge to the conservative movement, an existential challenge, so, yes, I have made it my mission to stop him," Mr. Sykes added.