This is not about the Cruz/Donald wrestling match, or about feeling the Bern as Hillary quakes, or any of that other catchy stuff.   However, it does get close to the land that nurtures that Wailing Witchy Warbler of Wasilla; Alaska Salmon.  It also makes us aware of another form of pollution coming at us, from of all places- Canada.   Mineral mining in the Canadian Province of British Columbia is dumping its toxins into the headwaters that give birth to the Salmon.  All of this poison may be the result of of years of neglect of the previous Harper administration, but we must be aware of what all of this is causing.  I visited Sitka, Alaska earlier this year, and had no idea of all of this.  Global warming has negatively affected the Salmon catch this past season, and I think we now need to be aware of the dumping of mining trailings.  It has not been enough to kill the XL Pipeline.  It is now time to address the poison that is killing our fish:
http://www.nytimes.com/2016/01/24/opinion/sunday/a-canadian-threat-to-alaskan-fishing.html?emc=eta1
(if you need better details of the inset maps, click on the above web link)

A Canadian Threat to Alaskan Fishing 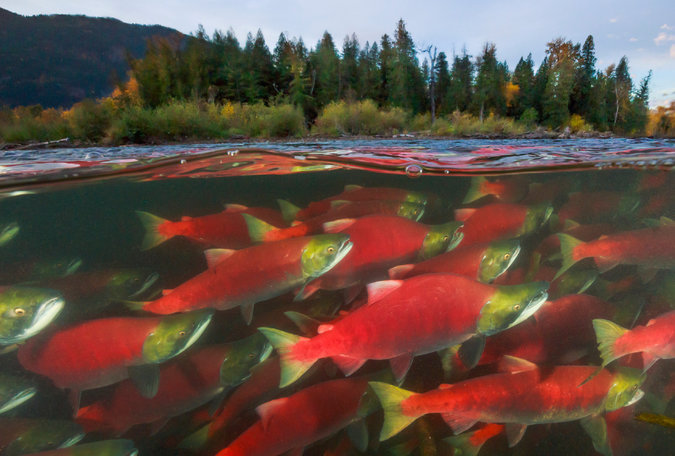 Sitka, Alaska — FROM fall through spring, the fleet of commercial fishing boats here in the panhandle of Alaska stalk winter king salmon. In the mornings prisms of ice sparkle beneath the sodium lights of the docks, where I live on a World War II tugboat with my wife and 8-month-old daughter. This winter I've been out a few times fishing on the I Gotta, catching pristine wild salmon, torpedoes of muscle. But the work is slow, five fish a day, and my skipper recently traveled down to Reno, Nev., for knee surgery.

Carpeted in rain forest and braided with waterways, southeast Alaska is among the largest wild salmon producers in the world, its tourism and salmon fishing industries grossing about $2 billion a year. But today, the rivers and the salmon that create these jobs — and this particular way of life, which attracted me from Philadelphia to Sitka almost 20 years ago — are threatened by Canada's growing mining industry along the mountainous Alaska-British Columbia border, about a hundred miles east of where I now write.

At least 10 underground and open-pit copper and gold mining projects in British Columbia are up and running, in advanced exploration or in review to be approved. These operations generate billions of tons of toxic mine tailings stored behind massive dams, creating an ecological hazard at the headwaters of Alaska's major salmon rivers — the Stikine, Unuk and Taku, which straddle the border with Canada.

Despite being subjected to the environmental and health risks of these upstream mining projects, Alaskans have no say in their approval. Which is why fishermen, Alaska native tribes, local municipalities, tourism businesses, our congressional delegation and thousands of individual Alaska residents have been clamoring for the State Department to refer this issue to the International Joint Commission, an American and Canadian advisory body established in 1909 to ensure that neither country pollutes the waters of the other.

Last August, on a visit to Alaska, Secretary of State John Kerry addressed the issue: "Downstream impacts should not be taken lightly by any country anywhere." But when Alaska's lieutenant governor, Byron Mallott, visited Washington to ask that the International Joint Commission examine the problem, he returned saying that State Department officials told him that this was a local issue.

In August 2014, an earthen dam holding back a nearly one-square-mile waste pond collapsed at the Mount Polley mine in British Columbia. About 4.5 billion gallons of water, full of toxic ​debris, destroyed a creek and fouled two lakes and the surrounding forest. 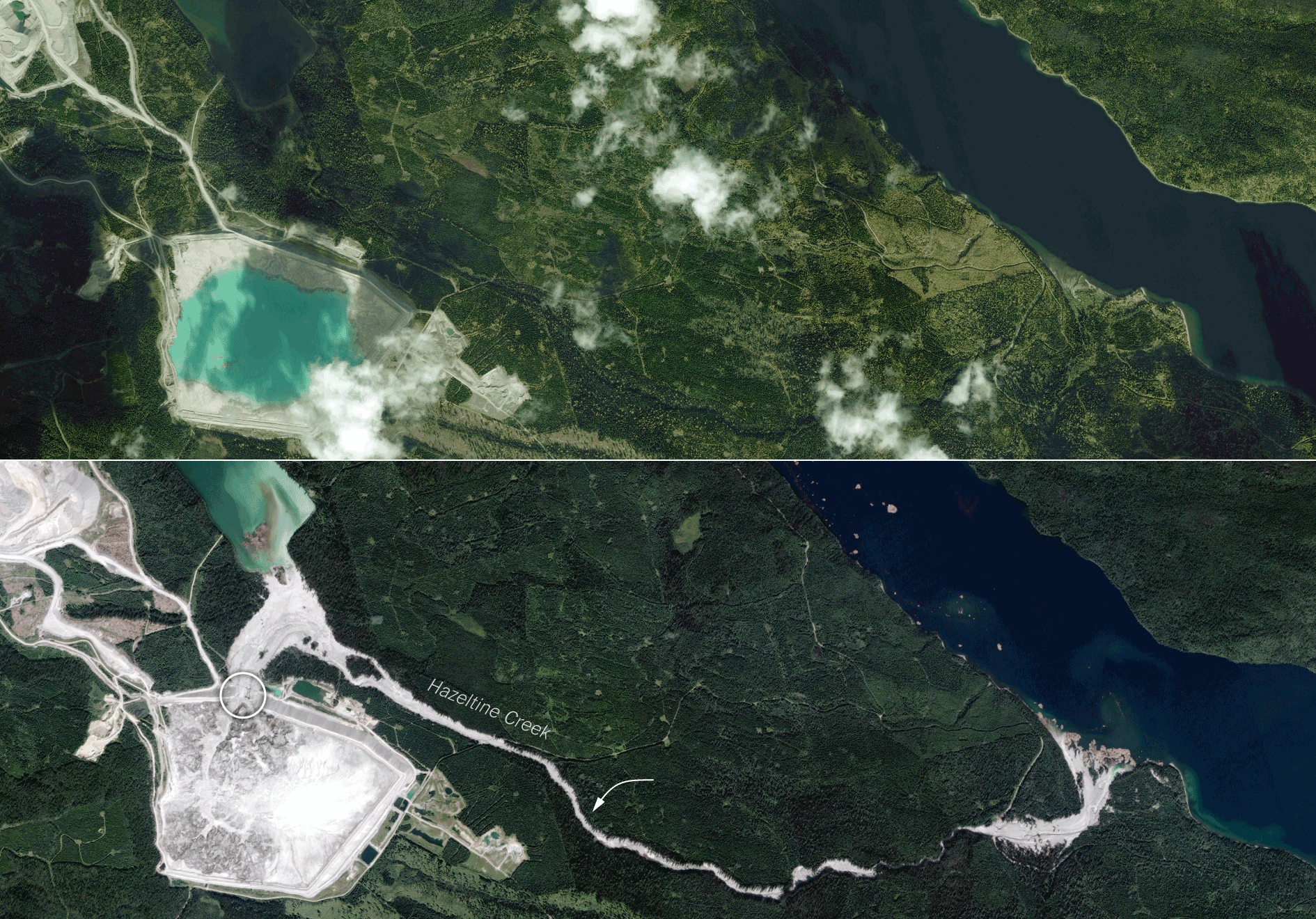 Concerns about these mining projects are not new. In November 2011, a group of 36 scientists wrote an open letter to Christy Clark, the premier of British Columbia, warning of the environmental impact of the province's mining industry. They predicted that "habitat for salmon and other wildlife will be destroyed" and that additional effects would include "altered flow and temperature patterns, disturbance to wildlife interacting with roads, and reduced water quality associated with sedimentation and acid mine drainage."

Three years later, in August 2014, a tailings dam at the Mount Polley mine in British Columbia failed. A volume of water equivalent to thousands of Olympic-size swimming pools, laden with sediment and heavy metals, washed away Hazeltine Creek and dumped into Quesnel Lake, a key salmon spawning ground of the Fraser River watershed. According to Jacinda Mack, a member of the Secwepemc Nation, located downriver from Mount Polley, the following summer was the first time in thousands of years that native tribes didn't gather sockeye salmon, because of concerns over metal in fish tissue. The episode is now considered one of the worst mining spills in North American history.

An independent investigation funded by the government of British Columbia uncovered flaws in how the dam at the Mount Polley mine was built, maintained and operated, and recommended against using similar tailings facilities. The government publicly stated that the recommendations would be implemented. However, shortly after the release of the report, Imperial Metals, the owner of the Mount Polley mine, received a provincial permit to operate an open-pit mine called Red Chris, with a facility similar to that of Mount Polley — except this one was larger, built to contain highly toxic acidic tailings, and made use of an existing freshwater trout lake. So long, trout.

Today, the Red Chris mine processes 30,000 tons of ore a day — the equivalent of three Eiffel towers — about 150 miles from the Alaska border, and leaches untreated acidic water into the salmon-rich transboundary Stikine watershed.

At least six mining operations are proposed, under construction or operating in watersheds that drain into Alaskan waters. Several more sites are being explored for their mining potential. 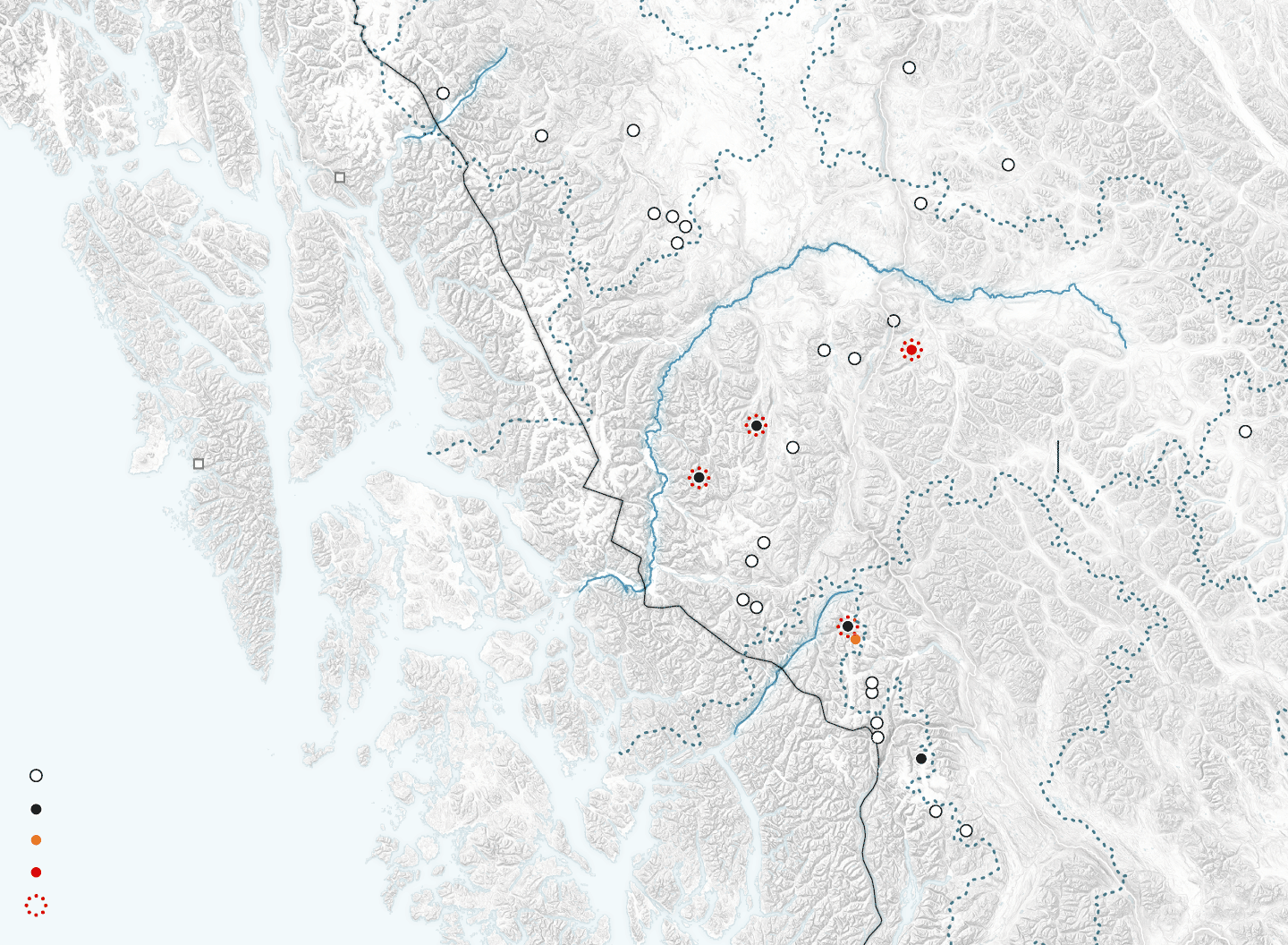 Alongside big events like the Mount Polley disaster is the slow leach of toxins into Alaska waters. The Tulsequah Chief mine, built in the 1950s near the confluence of the Tulsequah River and the transboundary Taku River — and just over the border — has been polluting the Tulsequah for decades. Over the past 15 years there have been numerous remediation and pollution abatement orders from the government of British Columbia, to no good effect.

The government again inspected the Tulsequah Chief mine late last year, and found numerous violations, including continued acid mine drainage flowing into the Tulsequah. Chieftain Metals, the mine's owner, has said it cannot stop the pollution unless it starts up production to gain needed revenue. British Columbia granted the company the permits. And so the game continues.

Except that now people are starting to pay attention. In late November, perhaps to dispel growing unease among Alaskans, Premier Clark signed amemorandum of understanding with Alaska that would supposedly increase the state's role in reviewing mines. It's a charming document, but ultimately toothless: Language in the memorandum contains no legally binding obligations.

If we have learned one thing from depleted salmon runs in places like Norway, Iceland, Scotland, New England and Canada, it's that the waters and the forests nurturing these salmon cannot be destroyed without consequence. Secretary Kerry and the State Department need to take a stand on the part of Alaskans, Americans and some of the last wild rivers on earth, and request that the International Joint Commission act on this issue.

Soon my skipper will be back from Reno with a new knee, and I will fish with him, and perhaps his son. We will go out with our flashers and orange gloves and sharpened hooks and hunt salmon, tricking them onto dry land, as people here have done for thousands of years before us. And should be able to do for thousands more.