Something to Know - 14 January

There have been two naval mishaps recently.  One involved two US Navy patrol boats which, for confusing reasons to us so far, strayed into Iranian waters and were "captured and released" in short in fairly quick order.  Much still has to be explained as to what actually happened, but thanks to our recent dealings and communication over the "Nuclear Deal", things ended peacefully.  The other issue that happened on the high seas of Politics is the one that was revealed this morning in that the Sniper Ship HMS Cruz has suffered a torpedo blow and is apparently going to sink slowly in public opinion.  Seems as that the obnoxious and thoroughly odious Senator Ted Cruz, which flies a US and Canadian flag, failed to report campaign loans from two Wall Street banks (totaling close to $1 million) in the first voyage into Senate waters.   This article reveals some of the details, and only time will tell just how long the bad ship Cruz remains above water:
http://www.nytimes.com/2016/01/14/us/politics/ted-cruz-wall-street-loan-senate-bid-2012.html?emc=edit_th_20160114&nl=todaysheadlines&nlid=2318049 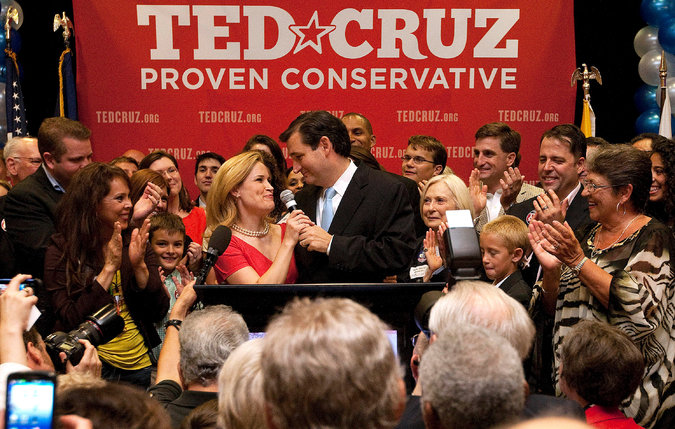 Ted and Heidi Cruz, after he won the runoff for the Republican nomination for a Senate seat from Texas in July 2012.CreditJohnny Hanson/Houston Chronicle, via Associated Press

As Ted Cruz tells it, the story of how he financed his upstart campaign for the United States Senate four years ago is an endearing example of loyalty and shared sacrifice between a married couple.

"Sweetheart, I'd like us to liquidate our entire net worth, liquid net worth, and put it into the campaign," he says he told his wife, Heidi, who readily agreed.

But the couple's decision to pump more than $1 million into Mr. Cruz's successful Tea Party-darling Senate bid in Texas was made easier by a large loan from Goldman Sachs, where Mrs. Cruz works. That loan was not disclosed in campaign finance reports.

Those reports show that in the critical weeks before the May 2012Republican primary, Mr. Cruz — currently a leading contender for his party's presidential nomination — put "personal funds" totaling $960,000 into his Senate campaign. Two months later, shortly before a scheduled runoff election, he added more, bringing the total to $1.2 million — "which is all we had saved," as Mr. Cruz described it in an interview with The New York Times several years ago.

Neither loan appears in reports the Ted Cruz for Senate Committee filed with the Federal Election Commission, in which candidates are required to disclose the source of money they borrow to finance their campaigns. Other campaigns have been investigated and fined for failing to make such disclosures, which are intended to inform voters and prevent candidates from receiving special treatment from lenders. There is no evidence that the Cruzes got a break on their loans.A review of personal financial disclosures that Mr. Cruz filed later with the Senate does not find a liquidation of assets that would have accounted for all the money he spent on his campaign. What it does show, however, is that in the first half of 2012, Ted and Heidi Cruz obtained the low-interest loan from Goldman Sachs, as well as another one from Citibank. The loans totaled as much as $750,000 and eventually increased to a maximum of $1 million before being paid down later that year. There is no explanation of their purpose.

A spokeswoman for Mr. Cruz's presidential campaign, Catherine Frazier, acknowledged that the loan from Goldman Sachs, drawn against the value of the Cruzes' brokerage account, was a source of money for the Senate race. Ms. Frazier added that Mr. Cruz also sold stocks and liquidated savings, but she did not address whether the Citibank loan was used.

The failure to report the Goldman Sachs loan, for as much as $500,000, was "inadvertent," she said, adding that the campaign would file corrected reports as necessary. Ms. Frazier said there had been no attempt to hide anything.

Kenneth A. Gross, a former election commission lawyer who specializes in campaign finance law, said that listing a bank loan in an annual Senate ethics report — which deals only with personal finances — would not satisfy the requirement that it be promptly disclosed to election officials during a campaign."These transactions have been reported in one way or another on his many public financial disclosures and the Senate campaign's F.E.C. filings," she said.

"They're two different reporting regimes," he said. "The law says if you get a loan for the purpose of funding a campaign, you have to show the original source of the loan, the terms of the loan and you even have to provide a copy of the loan document to the Federal Election Commission."

There would have been nothing improper about Mr. Cruz obtaining bank loans for his campaign, as long as they were disclosed. But such a disclosure might have conveyed the wrong impression for his candidacy.

Mr. Cruz, a conservative former Texas solicitor general, was campaigning as a populist firebrand who criticized Wall Street bailouts and the influence of big banks in Washington. It is a theme he has carried into his bid for the Republican nomination for president.

Earlier this year, when asked about the political clout of Goldman Sachs in particular, he replied, "Like many other players on Wall Street and big business, they seek out and get special favors from government."

In recounting the decision to put all of their savings into the campaign, Mr. Cruz said in the 2013 Times interview that Mrs. Cruz immediately agreed to his proposal, even though he was trailing in the polls and still viewed as a long shot against Lt. Gov. David Dewhurst, who spent $24 million of his own money on the race.

"What astonished me, then and now, was Heidi within 60 seconds said, 'Absolutely,' with no hesitation," Mr. Cruz said.

Mrs. Cruz, who is on leave as a managing director at Goldman Sachs, later suggested that the reality was more complicated. She told Politico in 2014 that she thought they should apply "common investment sense" and not use their own money for the campaign "unless it made the difference" in winning. The article did not mention anything about loans from banks.

The money from the Cruzes allowed his campaign to keep running television ads in the period preceding the primary election, including a $300,000 ad buy that highlighted the story of Mr. Cruz's father's flight from Cuba in the 1950s after opposing the Batista regime. Mr. Cruz earned enough votes in the primary to qualify for a runoff, where he defeated Mr. Dewhurst and went on to win the general election.

The ethics reports that candidates file with the Senate require them to list all assets they held at the close of the year or that generated income during the year. Assets are reported in broad categories of value, such as $1,001 to $15,000 and $100,001 to $250,000.

The biggest change in the Cruzes' finances in 2012 was the addition of the two bank loans, each valued at $250,000 to $500,000, during the first half of the year. One was a margin loan from Goldman Sachs. Margin loans, which are secured by holdings in a brokerage account, are often used to buy more stocks, but can be obtained for almost any purpose.

The other loan was a line of credit from Citibank. Even if the Citibank loan did not go directly into the Senate campaign, it could have freed up other assets for that purpose. While the Cruzes were well paid — he made more than $1 million a year as a law partner, and she earned a six-figure income as an executive in Goldman Sachs's Houston office — they also had big bills, including mortgage payments and full-time child care.

Both loans had floating interest rates around 3 percent, according to Mr. Cruz's Senate disclosures, which appear to be generally in line with rates available to wealthy borrowers at that time.Y

During the remainder of 2012, the Cruz campaign repaid Mr. Cruz for about half of the money he lent. His Senate disclosures show that he and his wife paid off the Citibank loan that same year. As for the Goldman Sachs loan, it remains outstanding, though the balance has been reduced to between $50,000 and $100,000.

The federal guide to campaign finance reporting for congressional candidates makes it clear that if the original source of money for a candidate's personal loan was a margin loan or a line of credit, it must be disclosed.

"Bank loans to candidates and loans derived from advances on a candidate's brokerage accounts, credit cards, home equity line of credit, or other lines of credit obtained for use in connection with his or her campaign must be reported by the committee," according to the guide.