Something to Know - 11 January

This article from today's NY Times reminds me of the life, while in economic exile in Georgia, before I moved back to California.  Every paragraph brings back memories of  some of the  political culture shock endured during my 24 years living about 27 miles south of the city of Atlanta.  It is here for your amusement:
http://www.nytimes.com/2016/01/11/opinion/campaign-stops/how-to-be-liberal-in-lower-alabama.html?emc=eta1

How to Be Liberal in Lower Alabama 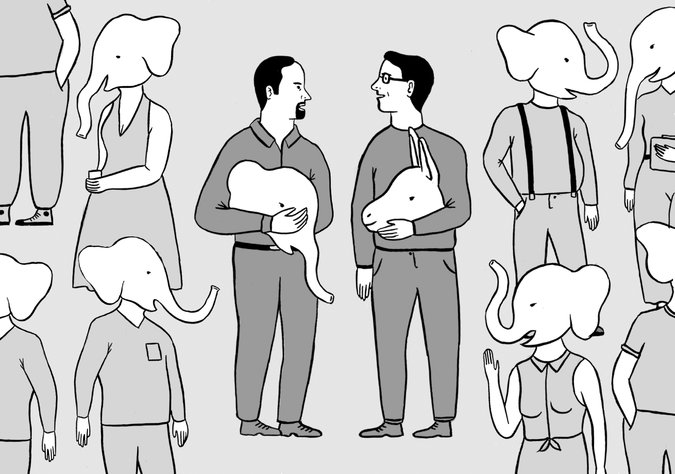 Fairhope, Ala. — ON New Year's Eve my wife and I, Democrats in one of the most Republican states in the nation, attended a Cotton Bowl party near Mobile Bay. For a few hours, politics was forgotten as we cheered on the Alabama Crimson Tide to its 38-0 triumph over the Michigan State Spartans.

By New Year's Day, hung over from the Champagne fizz of believing we were one, we'd retreated into election-year tribalism. As blue dots in a red state — 77 percent of Baldwin County, where we live, voted for Romney in 2012 — my family can shut up, leave town or speak up. How, though, with dialogue at the national level ever more confrontational and strident, do we talk to our neighbors?

Sometimes it seems impossible. When I see the Obama/Biden 2008 sign propped in my garage, I'm reminded of the night it disappeared from our yard, turning up in a ditch. An acquaintance recently pinned us at a restaurant bar, decrying the president for being a Muslim. In casual banter people start in on Hillary Clinton as morally corrupt, assuming we'll nod.

Donald J. Trump galvanized hordes last August across the bay in Mobile, and Senator Ted Cruz excited fans in neighboring Daphne last month, further roiling the air. No longer, as Democrats, are we seen as folks who have a different approach to solving common problems. We're alien beings.

Never in recent memory has it been so acrimonious. When I returned South in 1996, after living for 20 years in New York City, the right emphatically outnumbered the left but, except at the extremes, there was a measure of respect. In the Clinton-Dole matchup that fall, a Clinton '96 button provoked vigorous discussion across political lines. Clinton '16 will generate vitriol.

After Alabama supported John F. Kennedy for president in 1960, the first election I remember as a child, I watched as my state's majority, mostly white, shifted rightward in the aftermath of the civil rights '60s — on through the Reagan '80s, the Christian right '90s and the Tea Party '00s. Blue Dog Democrats, conservatives who provided a bridge to the right, largely disappeared, and Republican moderates became an endangered species. As an old lion of the local G.O.P. establishment confided to me at a holiday party: "If Trump or Cruz gets the nomination, you might find me in Hillary's camp."

Meanwhile, agreeing to disagree has gone the way of the quill pen. When Mr. Cruz, speaking at a rally 10 minutes up the road from me, began to reflect on what he'd do on his first day in office, someone reportedly shouted from the crowd: "Put Hillary in jail?"

In some ways, it's the same story everywhere. But it feels different when you're in the small, embattled minority. There's a proud tradition of Southern liberalism, with some willing to take the heat at any cost, but given that people these days can be downright mean, ever more of my left-leaning friends prefer to express their convictions only when marking the ballot. "I've got a business here, so I keep my opinions to myself," a man in his 60s told me. "I edit myself so people will find me approachable," says a friend in his 20s.

Why not pull up stakes and leave? "I sometimes think I'd like to live elsewhere where there are more people who think like me," admitted a friend, "but I love it here."

We do, too. We've got a small circle we watch election returns with who self-identify as Democrats — party registration is not required in our open-primary state — and hash over issues with them we agree on, if we choose. We live on the east side of Mobile Bay in Fairhope, conservative at its core, but with a tradition of welcoming writers, artists and eccentrics, who mingle with the fishermen on Fairhope Pier. It would be enough just to enjoy folks who are like-minded and the beauty of Mobile Bay, or wait for a unifying kickoff, like Alabama vs. Clemson in tonight's college football championship game.

With the election at hand, the atmosphere here will get worse before it gets any better. But my family is deeply invested in the well-being of the whole community, stretching far beyond both sides of the bay. So what to do, when we're not watching football?

Civic discourse, disintegrating at the top, has become ours to help restore from the bottom — on the pier, up the street, at fish fries. My wife and I have taught in area schools, written for local publications, watched our children grow up. The key, I think, is for folks like us to try to engage, no matter the animosity from the wings, with people with other points of view. We might not share common ground, but we inhabit it, often for generations.

We've sat down for dinner in our house with people of varied backgrounds, including our congressman, a Republican. He and I agree on little but have been friends since high school. I want to maintain other friendships like that.

My hometown will never be blue again, at least not in my lifetime, nor will I change anybody's mind. But I might help somebody think about an issue, from gun control to immigration, in a different way. Or it could happen the other way around. That's the risk of dialogue. "You're crazy!" as an opener doesn't get the conversation very far.

"We've never really talked about politics with Democrats," a couple we know on the right told us after we'd bumped into each other at a cafe and decided to share a table. They thought our kind was bizarre and unfriendly. They'd been duped. We weren't aliens, after all.