Something to Know - 6 September Those who know me are aware that I am a rather secular type, when it comes to religious belief, and only know the bible as something from which questions on Jeopardy are a source.  I am a Unitarian, if I had to check a box on a questionnaire for religious preference.  When I lived in the South, it was easier for me to say that I was Unitarian, rather than an Atheist.   No one knew what a Unitarian was, but I would really be ignored or shunned or be cast out if I said anything like Agnostic or Atheist.   That all being said, you probably wonder why I am sending this particular piece on Pope Francis.   It is not his religious office, but the positive impact on many people around the world, and an example to those who should be more compassionate to those who are the less fortunate.   Hope his visit to the USA has a good outcome:
http://www.nytimes.com/2015/09/06/us/pope-francis-is-coming-to-america-after-avoiding-it-for-78-years.html?emc=eta1

Pope Francis' Visit to U.S. Is His First Ever, for Several Reasons

During his first private meeting with Pope Francis in the Vatican two years ago, Cardinal Timothy M. Dolan said, the pope took out an atlas with a map of the United States and asked Cardinal Dolan, the archbishop of New York, to point out the various regions and cities and talk about how they differed.

Francis seemed to recognize that he had some homework to do: When he travels this month to Washington, New York and Philadelphia, the visit will be his first to the United States. Both of his most recent predecessors, Benedict XVI and John Paul II, traveled to the United States before rising to the papacy. Other Catholic prelates from around the world have come for fund-raisers, speaking engagements or global Catholic events, like World Youth Day in Denver in 1993.

But Francis, a former archbishop of Buenos Aires, had steered clear of the United States, which has the world's fourth-largest Roman Catholic population. Something of a homebody, preferring to hang out with the poor than the rich and powerful, he has waited until 78 to visit the economic giant that likes to think of itself as the center of everything.

"He's a little nervous about coming," Cardinal Dolan said at an interfaith event in New York in May. "Not that he lacks any confidence in the reception of friendship that he knows he'll get, but he readily admits he has never been to the United States."

Those who have known Francis, both before and after he became pope, say the reasons for his absence have everything to do with his distinctive identity. He is a Latin American critical of the United States' economic and political hegemony, a Jesuit of Italian ancestry who looks more to Europe than to North America, a Spanish speaker who is not all that comfortable speaking English, and a pastor who disdains "airport bishops" — his term for prelates who spend more time jetting around the globe than serving in their dioceses.

He is not opposed to all America represents. But he is troubled by privileged people and nations that consume more than their share and turn their backs on the vulnerable. The message he will probably deliver when he comes, they say, is that the United States has been blessed with great gifts, but that from those to whom much is given, much is expected.

"I think what he criticizes in the U.S. is the absolute freedom and autonomy of the market," said the Rev. Juan Carlos Scannone, a professor emeritus of philosophy at Colegio Máximo, a prominent Jesuit college near Buenos Aires. He taught the young Jorge Mario Bergoglio, who would become Francis, as a seminarian and became a friend. "We should admire the U.S.'s democracy and the well-being of its people, but what Bergoglio would criticize is the consumerism: that everything is geared toward consumerism."

Francis has long been troubled by what some Argentines of his generation call "savage capitalism." They see the United States as the home of mining companies and agribusinesses that chew up natural resources, as the military power that propped up dictators during the Cold War and as the neighbor that tries to close its border to migrants fleeing hunger and violence.

The Rev. Richard Ryscavage, a Jesuit who is the director of the Center for Faith and Public Life at Fairfield University and has met Francis twice, said Francis' views should be seen "in the context of many Latin Americans who see the United States as really a problem, not actually a positive force in the world."

"I've seen this among Latin American Jesuits who have similar approaches," Father Ryscavage said. "And it's often rather difficult for the North American Jesuits to completely accept their perspective on things, because we come from such a different angle."

The United States will be the 15th country Francis has visited in his more than two years as pope. His travel priorities have been a demonstration of his motto: "Go to the peripheries" to encounter those who are marginalized. His first official trip outside Rome was to Lampedusa, a Sicilian island where he greeted migrants who had survived their exodus from Africa.

Since then, he has traveled to Brazil; to Israel, Jordan and the occupiedPalestinian territories to urge them toward peace; to the Philippines, South Korea and Sri Lanka; and, most recently, to Bolivia, Ecuador and Paraguay.

On his way to the United States, he will spend four days in Cuba, again prioritizing the periphery over the center on a socialist island that has just begun to revive relations with the United States — in part because of Francis' intervention. 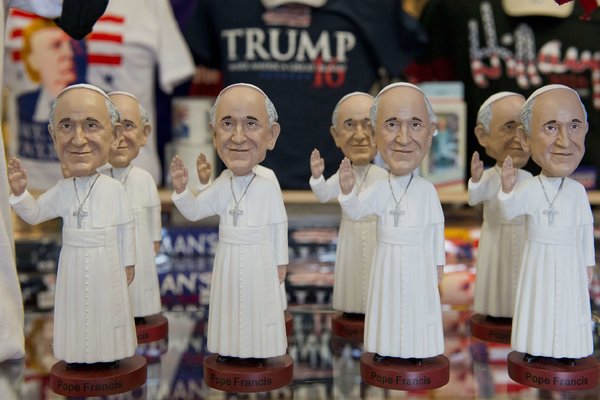 Francis dolls for sale in Washington next to products for Donald J. Trump, an emblem of some qualities the pope criticizes. CreditAndrew Caballero-Reynolds/Agence France-Presse — Getty Images

He has also frequently denounced a global economic system that values "profit at any price," and a colonialist structure that "reduces poor countries to mere providers of raw material and cheap labor" — a critique widely interpreted to include the United States.

And yet, those who have studied him and know him say Francis has also expressed an appreciation for the United States — for its lively democracy, its religious diversity and its identity as a nation formed by absorbing successive waves of immigrants.

Francis himself is a son of immigrants: His father moved from Italy to Buenos Aires in 1929. Austen Ivereigh, the author of a biography of Francis, said last weekend at a conference of the Religion Newswriters Association, "He could easily have ended up in Philadelphia or Chicago, as well as Buenos Aires, and he can easily relate" to the American experience.

And many Americans relate to Francis. In a poll conducted last month by the Public Religion Research Institute, two-thirds had a favorable view of him. Polls also reveal, however, that he has work to do to persuade Catholics to adopt his views on combating climate change, ending abortion and welcoming immigrants.

At the Vatican, he has welcomed many prominent American visitors, including President Obama and Vice President Joseph R. Biden Jr.

But for a pope who speaks through his gestures, his itinerary in the United States conveys his message. After Francis addresses a joint meeting of Congress in Washington on Sept. 24, he will be driven directly to a lunch with homeless, mentally ill and immigrant clients of Catholic Charities, which will be held under tents set up on a street. Instead of lunching with legislators in the halls of power, he will break bread with the poor.

"I think the Holy Father sees the influence the U.S. has throughout the world and wants to make sure the plight of the poorest people is served,"Archbishop Joseph E. Kurtz of Louisville, Ky., president of the United States Conference of Catholic Bishops, said in an interview.

Francis, Archbishop Kurtz said, is saying, "We throw away things, and we take that attitude into the way we see people."

Cardinal Donald Wuerl of Washington recalled an encounter with Francis, then Archbishop Bergoglio, that he said spoke volumes about Francis' views of the United States. It was 2006, and they were attending a council of bishops at the Vatican. The head of the council announced that "Brother Wuerl" should be congratulated on his appointment as archbishop of Washington.

"At the coffee break, Cardinal Bergoglio came up to me, and he said: 'Washington. That's the capital of your country. Right?' " Cardinal Wuerl said in an interview. "And I said, 'Yes.' And he said, 'So is Buenos Aires in mine.' "

"He smiled, and he just enjoyed his little joke," Cardinal Wuerl said. "It was his way of saying lots of us serve in dioceses that are capital cities in their part of the world. It was just very nicely said. He was not saying this directly, but I think it was a good reminder to me that we in North America really have to remember that we are not the center of everything."

If I do not return to the pulpit this weekend, millions of people will go to hell.