Something to Know - 19 July

I would not normally leave you with this National Inquirer type of story, but it is from the NY TImes, and I need to pass on that we will be going on a driving trip (no boat this time), up through Northern California, Oregon and beyond for about two and a half weeks.  I will advise my daughter-in-law, Sirinya, that she can fill in and post whatever she finds interesting on to the 1% Blog at    http://www.thejuanpercent.com/
http://www.nytimes.com/2015/07/19/opinion/sunday/frank-bruni-la-dolce-donald-trump.html?emc=eta1 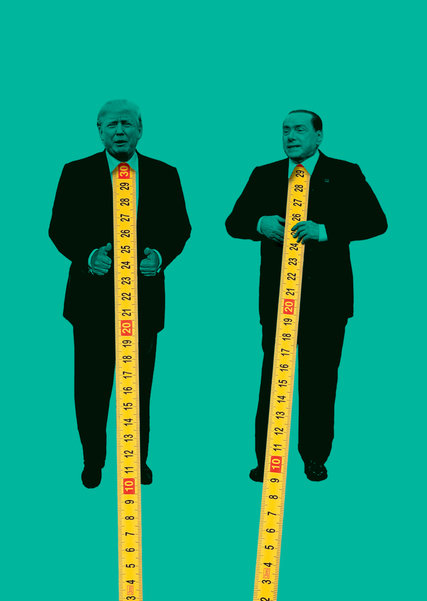 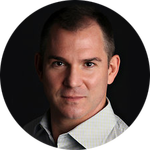 IN Rome about a dozen years ago, I had a long dinner with Donald Trump.

Only his name was Silvio Berlusconi.

Aren't they essentially the same man? The same myth?

They have the same obsession with their wealth. Same need to crow about it. Same belief that it's the irrefutable measure of their genius. Same come-on to countrymen: If I enriched myself, I can enrich you.

They're priapic twins, identical in their insistence on being seen as paragons of irresistible lust. If hideously sexist utterances ensue, so be it. Loins before decency. Pheromones over good sense.

And the vanity. Oh, the vanity. During my meal with Berlusconi, who was then the prime minister of Italy, he grew most animated when complaining about Italian journalists' put-downs of him as a dwarf.

A dwarf! He stressed to me that he was taller than José María Aznar, Spain's leader at the time. A few years later, on a television talk show, he informed Italians that he was "definitely taller" than Napoleon. And a few years after that, at a political rally, he proclaimed: "I am taller than Putin and Sarkozy," referring to his Russian and French counterparts. "I don't understand why all the caricaturists portray me as a dwarf, whereas the others are allowed a normal height."

We give in, Silvio. You're a mountain among midgets.

And we admit it, Donald. No one's hair sweeps the heavens like yours.

You two are the biggest, the best, shaming all the rest.

Now will you please just let us be?

Trump shows no signs of doing that. Last week he made a new bid to be envied, once again unzipping his accounts and flashing the world his finances. This time he claimed to be worth about $10 billion, which is almost certainly a gross exaggeration. His assets expand with his ego.

His popularity with voters does, too, according to recent polls, which showed him at or near the head of the pack for the Republican presidential nomination. I don't expect this to last, but it probably means that we're stuck with him through at least a few debates.

So it's time to search for solace, and perhaps there's some in knowing that he's not a peculiarly American creation, nor is he a particular indictment of our political culture and electorate.

Trump is Berlusconi in waiting, with less cosmetic surgery. Berlusconi is Trump in senescence, with even higher alimony payments.Those Italians whose art we bow down before and whose food we fetishize have a Trump of their very own, a saucy, salty dish of Donald alla parmigiana. They repeatedly elected him, so that he could actually do what Trump is still merely auditioning to do: use his country as a gaudy throne and an adoring mirror as he ran it into the ground.

Trumpusconi is a study in the peril and pitfalls of unchecked testosterone and tumescent avarice. It's a commentary on wealth in the Western world: how ardently certain blowhards pursue it, how much the rest of us forgive in those who attain it, how thoroughly we equate money and accomplishment.

It's a comedy. It's a tragedy.

"Best Sex I Ever Had" blared a front-page headline in the New York Post in 1990. It ostensibly quoted Marla Maples, the second of Trump's three wives, but a skeptical reader wondered who really planted that story, especially as the years went by and Trump's boasts flowered:

"All of the women on 'The Apprentice' flirted with me, consciously or unconsciously. That's to be expected."

"Oftentimes when I was sleeping with one of the top women in the world I would say to myself, thinking about me as a boy from Queens, 'Can you believe what I'm getting?' "

The two billionaires' tasteless words are so interchangeable that it's sometimes hard to tell who said what, but you can test your skill with a quiz, Name That Narcissist, that accompanies this column online.

Who said it: the brash American billionaire or the brash Italian one? 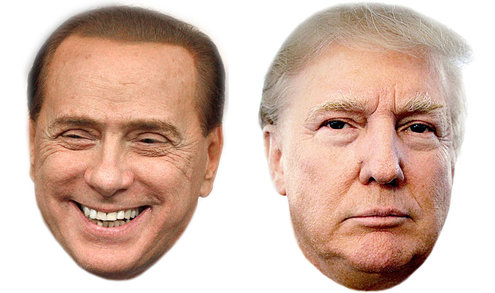 I'M not the first to notice the uncanny Trump-Berlusconi resemblance. Four years ago my Times colleague Timothy Egan mulled it, and in a Vanity Fair story, "La Dolce Viagra," Evgenia Peretz wrote: "Imagine a President Donald Trump with the media holdings of Rupert Murdoch and the sexual tastes of an aging Charlie Sheen, and you're approaching the idea of Berlusconi."

But Trump is now an even bolder presence (and threat) on the political landscape than he was then. As I gape at him afresh, I'm transported back to my two years as The Times's correspondent in Rome and my twomeetings with Berlusconi.

Like Trump, Berlusconi built his fortune with real estate. He then bought media outlet after media outlet, infiltrating people's hourly lives, imprinting himself on their very consciousness. A similar impulse animates Trump, who has emblazoned his name not just on skyscrapers and casinos but on mattresses, clothes, cologne.

They're both after omnipresence, and they both understood early on how crucial television was to that. Berlusconi took ownership of Italy's airwaves, which he used to broadcast game shows and news programs with women in various states of undress. Trump took partial control of the Miss USA and Miss Universe pageants, and played the lord of all capitalism on "The Apprentice."

To their profound chauvinism they add racial insensitivity, though, in fairness, Berlusconi's doesn't have Trump's calculated, meanspirited edge. Berlusconi's infamous crack about the Obamas — that the couple must have gone to the beach, because they looked tanned — pales next to Trump's anti-immigrant tantrums and xenophobic rants. In a clip from a radio interview released on Friday, Trump called for a boycott of Mexico, saying that "it's a corrupt place" that treats America "very, very badly." He pledged not to set foot there. A howl of grief rose from Guadalajara, and Ciudad Juárez wept.

Both men have learned that they can turn such cloddishness to their advantage, by casting it as unvarnished candor. Sloppy talk becomes straight talk. Insult becomes authenticity, even if it's pure theater and so long as it's a hell of a show.

And self-regard goes a long, long way. It can be mistaken for wisdom. It can masquerade as vision. With enough of it, the clown transforms himself into a ringleader. The dwarf looks like a giant.

If women ran the world we wouldn't have wars, just intense negotiations every 28 days.