I very much wish it were J5, my father-in-law, writing this instead of me because he'd wax poetic in ways that I just cannot. I'm still trying to grasp exactly what is happening in Balitmore. There's so  much that I can't completely wrap my arms around it. I will try anyway, because there is rioting in Baltimore and I am enormously sad for a couple of reasons. The one that makes me saddest is how I am not surprised because we live in a country that has systematized the oppression of people of color for centuries, in particular black men, and people are rightfully angry. They are furious.


A twenty-five year old named Freddy Gray died of serious spinal injuries after his arrest last week. Mr. Gray's funeral was today (dammit. I typed "wedding", then deleted it, then realized Mr. Gray will never have a wedding because he was killed for no good reason.) Some protesters (perhaps 100 out of several thousands) shifted to rioting. There has been looting, street fires, arrests and the declaration of a state of emergency.

An organizer for the Baltimorean chapter of the Sierra Club shared this on his personal Facebook feed: 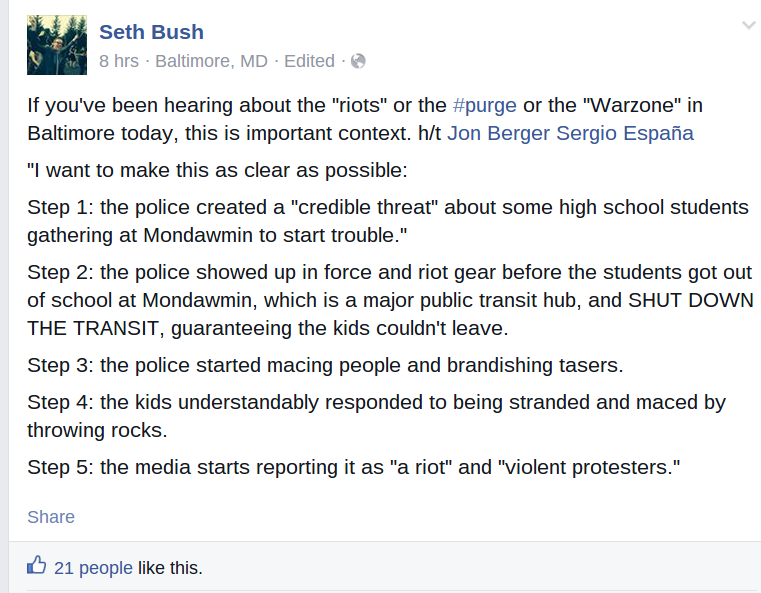 He later reminded us of this:

Hey folks, I can't claim to know exactly what happened here. I wasn't there, and I've learned a lot more over the past few hours. A lot has changed since the initial action at Mondawmin Mall and the situation has evolved extensively. In retrospect, I don't think "100% bought and paid for by the police department" is the right statement to use anymore. There is MUCH more at play here than just the police, a meme that may or may not have gone viral intentionally, gangs, "thugs", or the death of one person. Instead, an analysis in my own words of the 5 step genesis of today's actions is this: the pot boiled over.

We have stoked the fires with racism and systematic oppression for decades, and we have been naive enough to think we could avoid the boiling point by "controlling" the situation with a heavy militarized police presence. Although I condemn the use of violence as a tactic for change, I understand why it feels to some as their last resort.

I don't fault the police for doing their job and using the tools at their disposal to quell that violence, but I do fault the systems of oppression that have made it okay for the police to have those tools in the first place. So, to answer your questions/comments with my own words (instead of some I copied and pasted from a trusted and still very much respected friend): The police didn't want to create this threat, but they/we did anyway. It was proactive policing AND it was manufactured...by our own negligence of communities that have been crying out for help and not getting what they ask for because we haven't actually been listening.