Something to Know - 27 January

Two guys with lots of money, from an energy empire based on the burning of fossil fuels, inherited from their dad are also in the business of influencing the world of politics. The Brothers Koch just finished their Palm Springs gathering where other wealthy Friends Upholding Conservative Koches United did a meet-and-greet and a beauty pageant where prospective conservative Republican candidates came to the stage and auditioned for money.   Yes, money is the name of the game in politics.  The bottom line, after all arguments and questions of ethics and slime are answered is this:  What does all of this money do for those who get the Koch money?  Yes, it goes for all of those ads on TV and billboards we will see and hear.   That promotes voter educations, right?  You betcha.   But you must remember that this is a quid-pro-quo world in the game of high rollers.   There is enough money in this $889 Million to buy and support each and every Republican who dances and sings to the Koch agenda (which is ironically the game plan for much of the top .01% of the top 1% of our unequal economy).   Is this all fair?    Oh, you betcha, they say.   What say us of the 99%?:
http://www.nytimes.com/2015/01/27/us/politics/kochs-plan-to-spend-900-million-on-2016-campaign.html?emc=eta1 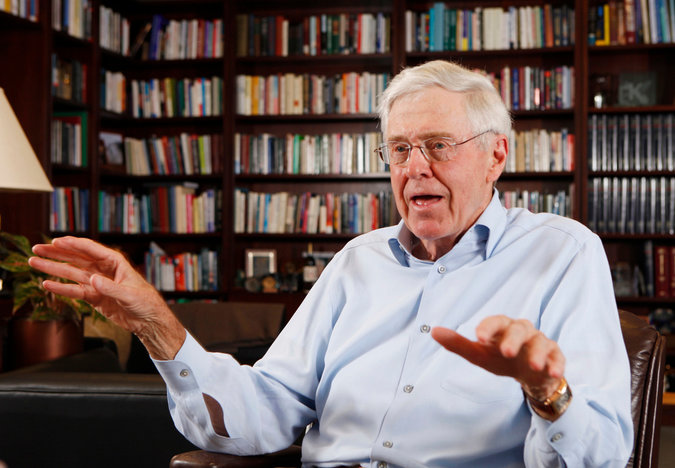 Charles Koch in 2012. The Kochs and their advisers have built a robust array of political organizations.CreditBo Rader/The Wichita Eagle, via Associated Press
Share This Page

The political network overseen by the conservative billionaires Charles G. and David H. Koch plans to spend close to $900 million on the 2016 campaign, an unparalleled effort by coordinated outside groups to shape a presidential election that is already on track to be the most expensive in history.

The spending goal, revealed Monday at the Kochs' annual winter donor retreat near Palm Springs, Calif., would allow their political organization to operate at the same financial scale as the Democratic and Republican Parties. It would require a significant financial commitment from the Kochs and roughly 300 other donors they have recruited over the years, and covers both the presidential and congressional races. In the last presidential election, the Republican National Committee and the party's two congressional campaign committees spent a total of $657 million.

PhotoHundreds of conservative donors recruited by the Kochs gathered over the weekend for three days of issue seminars, strategy sessions and mingling with rising elected officials. These donors represent the largest concentration of political money outside the party establishment, one that has achieved enormous power in Republican circles in recent years. 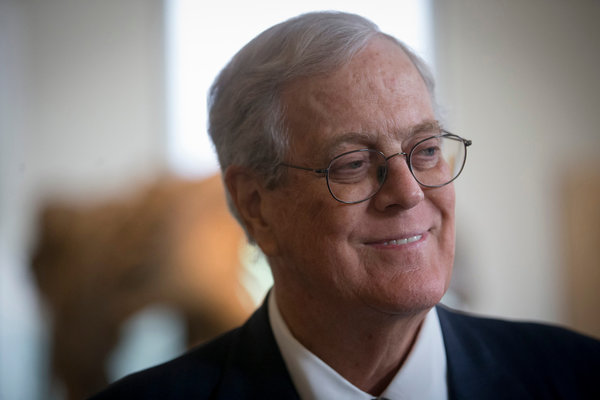 Now the Kochs' network will embark on its largest drive ever to influence legislation and campaigns across the country, leveraging Republican control of Congress and the party's dominance of state capitols to push for deregulation, tax cuts and smaller government. In 2012, the Kochs' network spent just under $400 million, an astonishing sum at the time. The $889 million spending goal for 2016 would put it on track to spend nearly as much as the campaigns of each party's presidential nominee.

The Kochs' efforts will put enormous fund-raising pressure on Democrats and liberal outside groups. Allies of Hillary Rodham Clinton, who appears to be preparing for a likely presidential campaign in 2016, expect that she will need to bring in more money than President Obama, the most successful fund-raiser in presidential history, and a "super PAC" supporting her is seeking to raise as much as $300 million in the coming months.

"It's no wonder the candidates show up when the Koch brothers call," said David Axelrod, a former senior adviser to Mr. Obama. "That's exponentially more money than any party organization will spend. In many ways, they have superseded the party."

The group's budget, disclosed by a conference attendee, reflects the rising ambition and expanded reach of the Koch operation, which has sought to distinguish itself from other outside groups by emphasizing the role of donors over consultants and political operatives.

While the Koch's expansive network houses groups with discretely political functions — a data and analytics firm, a state-focused issue-advocacy group and affinity groups aimed at young voters and Hispanics — it also includes groups like Freedom Partners, a trade organization overseen by Koch advisers that plans the retreat and helps corral contributions; Americans for Prosperity, a national grass-roots group; and Concerned Veterans for America, which organizes conservative veterans

While almost no Republican Party leaders were invited to the Koch event, it has become a coveted invitation for the party's rising stars, for whom the gathered billionaires and multimillionaires are a potential source of financing for campaigns and super PACs. Officials said this year's conference was the largest ever.

At least five potential presidential candidates were invited this year, and four attended, including Gov. Scott Walker of Wisconsin. On Sunday evening, three of them — Senators Marco Rubio of Florida, Rand Paul of Kentucky and Ted Cruz of Texas — took part in a candidate forum on economic issues.

The two brothers and their aides have begun to take steps to relax the strict secrecy that has long surrounded much of their political efforts. After spending the 2012 campaign as the Democrats' favored punching bags, Charles and David Koch have each granted a series of interviews to explain their views and philosophy. Their privately held firm, Koch Industries, has mounted a soft-focus advertising campaign called "We Are Koch," featuring the company's employees.The Kochs are longtime opponents of campaign disclosure laws. Unlike the parties, their network is constructed chiefly of nonprofit groups that are not required to reveal donors. That makes it almost impossible to tell how much of the money is provided by the Kochs — among the wealthiest men in the country — and how much by other donors.

Last summer, Freedom Partners established the network's first super PAC, allowing it to run more openly political advertising in the run-up to the 2014 midterm election. The move also required disclosing some of the network's other donors. Trusts controlled by the Kochs provided about $4 million of the super PAC's $25 million budget.

This year, Koch aides also provided — for the first time — limited access to the winter conference events and allowed reporters to view live video of the candidate forum on Sunday night.

As the three senators addressed the audience of rich donors — effectively an audition for the 2016 primary — they dismissed a question about whether the wealthy had too much influence in politics. At times they seemed to be addressing an audience of two: the Kochs themselves, now among the country's most influential conservative power brokers.

Mr. Cruz gave an impassioned defense of his hosts as job creators and the victims of unfair attacks by Democrats, while Mr. Rubio suggested that only liberals supported campaign finance restrictions, so as to empower what he said were their allies in Hollywood and the news media.

Politics have no relation to morals.